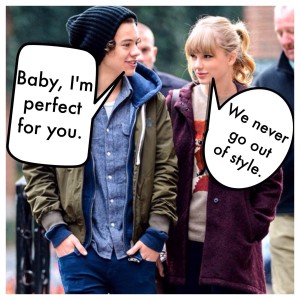 “And if you’re looking for someone to write your break-up songs about / Baby I’m perfect,” sings Niall Horan of One Direction, all but confirming that “Perfect,” 1D’s latest single in which the not-so-subtle lyrics appear, was written in regard to Harry Styles’s and Taylor Swift’s 2012 relationship.

Not only does “Perfect” seem to call out Taylor Swift for, well, being Taylor Swift, but it appears to piggy-back on her popular single “Style” from her most recent album 1989. Coincidentally, it has long been believed that “Style” was a musical and lyrical affront on Harry Styles. (Aside from the content of the lyrics, fans of the two artists discovered a sort of “Easter egg” that seems to affirm this widely held belief in the music video for “Style”—the appearance of Harry Style’s necklace.)

The similarities between “Perfect” and “Style” were made undeniable when one fan, Emily Sachs, who goes by the handle @emilys1DAF on Twitter, made a mash-up of the two that became wildly popular. Played together, the two songs seem to echo one another in a call-and-response fashion. Another fan who goes by the handle @NephetsYUI on Twitter even went so far as to combine the two music videos to create both a musical and visual mash-up. His mash-up is a catchy work of art on its own, check it out:

Some diehard Taylor Swift fans are saying she should sue the band for infringement, because the similarities between “Perfect” and her single “Style” could, perhaps, be perceived as plagiarism. While there has yet to be any buzz about the potential of Swift taking legal action against One Direction–(think: Taylor Swift’s “Better Than Revenge.” The ultimate revenge on your ex? Suing them for thousands of dollars.)–she definitely isn’t one to stand by when she’s being cheated. She recently took on Apple Inc. when she felt that she–in addition to many other artists–was being treated unfairly by being expected to provide her songs to Apple Music without compensation during a three-month trial period.

It doesn’t look like there’s going to be any “Bad Blood” or trouble, trouble, trouble between the band and Swift, and it is unclear if there even are grounds for a lawsuit–responding to a song is a lot different than copying a song, after all. Many other artists have, unfortunately, not made such a distinction when taking–ahem, stealing–inspiration from another artist. As for Swift and Styles, nobody is suing or getting sued; they can rest easy with their respective #squads. All is well, and it’s a beautiful day in the neighborhood.