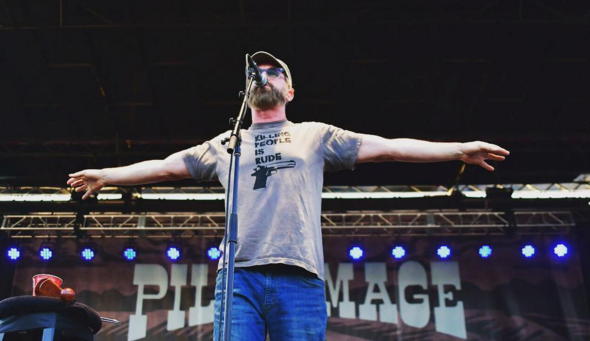 Pilgrimage is a Franklin music festival that seems to be themed around largely AC/DC rip off bands. That said, for a music festival in its second year, they attracted some big names: Violent Femmes, Cake, and Beck, to name a few.

The festival takes place on a farm à la Bonnaroo; however, if we’re comparing the two, Pilgrimage has a much greater area of open, green space that is not occupied by teenagers on shrooms. The attendees of Pilgrimage seemed to fall into two categories: college students and thirty-somethings with screeching toddlers. The odd dynamics did not, however, appear to impede the enjoyment of either group, and all sang, laughed, and were merry together (although I’m fairly sure that some of the toddlers got their first experience of weed stink, which made me a little embarrassed for my peers).

Violent Femmes’ set was fairly well put together, playing all of their bigger songs and a few extras to make sure attendees got bang for their buck. I had never seen them before, and live they are much more free form than they are when recorded, which was cool to see. I felt like this especially applied to “Country Death Song,” where they fleshed out the style and tone much further than I had heard before. The mixture of the music and heat, laying on a lumpy backpack in the middle of the Franklin countryside brought their set to life.

Cake’s set was the one that I felt was the most underwhelming, which was disappointing because I feel like their music is usually a very solid choice regardless of situation. The singer’s interaction with the crowd was pretty funny, but there was one moment where he made a questionable comment about Mexicans that created some awkwardness in the crowd, and to me they didn’t really recover after that. Though their actual performance was pretty decent, I didn’t feel that it really added much that I hadn’t heard before on Spotify–but I was glad that I saw them even though it was a little weird.

Beck’s set was my favorite of the day; he mostly played his throwback bangers, which by that point, after spending all day drinking in the hot sun, were all that anyone wanted to hear anyway. Notable songs included “Loser,” “Where It’s At,” and “Girl,” which all brought their own 90’s flair. Overall, the show had a nice, small feel to it, like listening to music with a few friends on a pleasant late summer night, even though the crowd was fairly sizable.

I would recommend Pilgrimage for people who are interested in Franklin, average grilled cheeses, and Beck’s stylistic forays into rapping. It wasn’t life changing, but bring some friends and some beer money and it’s a pleasant way to spend a Saturday afternoon.