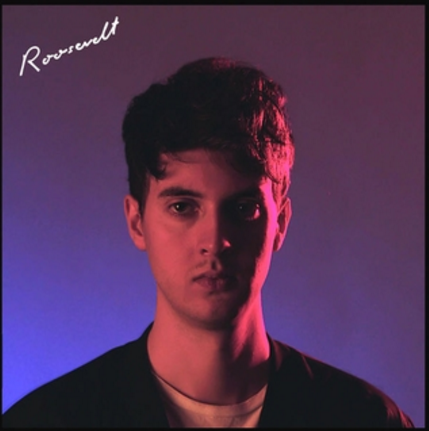 Roosevelt is a one man project by producer/DJ Marius Lauber of Cologne, Germany. He’s been making music for over 3 years, and recently French powerhouse label Greco Roman, picked him up. His debut album, Roosevelt, was released this August.

It emerges at a great time due to the fact that Roosevelt’s online presence and fan base have picked up quite a bit in the last couple of years.

All 12 tracks come together to create a “last long weekend of summer” sound or a nostalgia for mid July in early fall. It has something to dance to, meditate to, be in traffic to, and most importantly, something to desire. Behind electropop beats and French house touches are lyrics about the want to leave a place conflicting the desire to stay and lovers leaving after the sunrise.

“Wait Up” – Gloomy and rhythmic. There’s a soft echo throughout the song that makes it sound older, or more historic. The bass line is a major player in this song being the complete back bone. I feel like if Stranger Things ever had a happy episode it would play in the background.

“Night Moves” – Hypnotic and bouncy. Roosevelt takes us on to the club with this tune. As he croons about wanting to go home but the night just seems to keep him out, we dance and glide across the dance floor. The pre released single has a synth driven disco vibe that isn’t duplicated anywhere on the album.

“Belong” – Melancholic and head banging. Straight from the 80’s, this tune sends us back in time to strange days in 1986 roller skating in Seattle on a cold winter night. Nylon, electric guitars, and tears on the rink.

“Moving On” – What an infectious bass line right from the beginning. He really makes the bass the soul of the song and works from there adding a groovy melody but staying true to himself in the minimalist vocals and 1986 synths.

“Heart” – Fun and Flirty. This song has a lot of soft rock elements combined with his signature electronic touches. (After listening to his music long enough you’ll start to notice some niche things.) “Heart” is definitely something to be played at the beach because of how light it is and the fun it exudes.

“Colours” – There’s many details in this song that make it a groovy tune. The percussion is key and kicks off the song using what sounds like bongos and a regular drum kit. A piano riff is layered over and repeated throughout. Once Roosevelt brings the gentle vocals in, heads start to bob because the party has officially begun.

“Sea” – Original. This song was one of the first we got to listen to because it had been on YouTube for so long. The bass line carries the song. Roosevelt’s vocals come in so casually as if he’s telling a story under moonlight by the beach. Some sort of distorted guitar riff plays throughout really adding to the groove you feel.

“Fever” – Radio and Old School. There’s a ton of 80s pop in this song. I think it’s the most digestible on the album because it’s carefree, bright, and catchy. It’s all subtle in his songs, but he used many pop tools to make this song and you can hear them but they work in way that takes the cheesiness out of regular pop music.

“Hold On” – My Favorite. This is the song with the most R&B influence on the album. The melody is so slinky you cannot help but move. It’s so smooth that whenever I hear it I have to play it twice. There’s a mellowness to the song that makes it really addictive. Something about the way the song doesn’t have many many overlapping sounds in it doesn’t allow you to have to search for the groove in the bass, it just appears and never leaves so it becomes something natural.

“Close” – Daft? The record winds itself down with this song. Borrowing a synth from Stranger Things the song sets a mood. The room is flooding with cloudy white light. Clearly at the end of something great. The Casio beat used is so over done but sounds inevitably new in this ending song. I love the cheeky lyrics, “Lay down/Pull me close in the morning/ I know I should be out without warning”. He’s captured such a tender moment. His voice is so calm, it almost feels like he’s there singing to me in the morning. And everything is over.