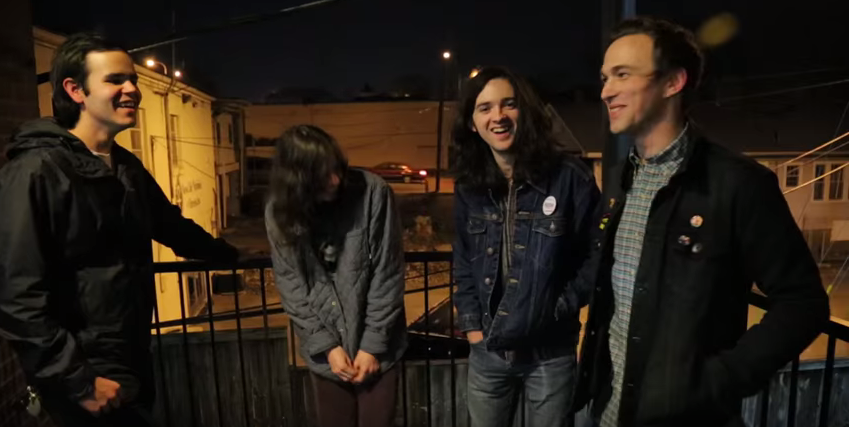 Because cramming events into a busy schedule of Nashville artists to see and curating your list of bands in your local music canon can be a difficult, discerning process, we hope to make it a little easier for you by encouraging you to check out Sun Seeker. We caught up with the band—which, if you are a Grins regular, has some familiar faces—at Grimey’s to create this video and ask them some questions.

Check out the video and more of the interview below.

Asher: Sun Seeker grew out of a band called Stripes.

Ben: And for [Sun Seeker] it’s been just a little over two years.

Alex: So Ben, Asher, and I have been playing together for six years, and Ben and Asher have played together for ten years. And Austin’s our homeboy. He rips and shreds. Now that he’s in it for a year…he’s strapped on for life.

Austin: This is the official end of the probationary period.

Alex: Yeah. We listen to a lot of Wilco. And The Band…

Asher: It’s funny that we’re changing our sound already, because nobody’s ever heard anything else by us. [laughs]

Austin: Yeah, an internal change. [laughs] The music was less subtle before, more angular—I mean, I wasn’t in the band from the beginning, but from the outside…

Alex: At the very beginning, it was definitely a poppier band…just indie pop—

Asher: Alex cried a lot more during our shows.

Alex: I cried much more. I’ve grown up now. I’m fourteen now, so.

On their dating deal breakers:

Asher: If you’re in a car, and you know when people go to turn in somewhere, and they get really slow when they’re about to turn into some place? Almost a complete stop? That’s a pet peeve. I won’t do that. They have to keep on moving. [laughs]

Ben: I don’t have anything—I’ve had a girlfriend for two years. She’s really chill, really nice. So I haven’t dated in a while.

Austin: yes, that is despicable—

Alex: I’m not…that’s forever a deal breaker. That happened once. I have high standards. Or just wear crocs. Crocs don’t squeak. Crocs: not a deal breaker.