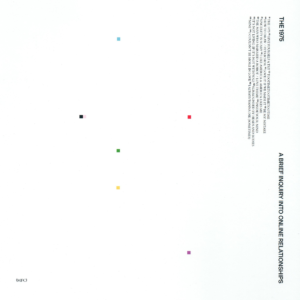 The 1975 has never been the band to shy away from extravagance. From the self-titled song appearing on all three of their albums to their ostentatious project titles — I’m looking at you, i like it when you sleep, for you are so beautiful yet so unaware of it —  Matty Healy’s britpop brainchild has usually been content to embrace their own glitz. Their newest project, A Brief Inquiry Into Online Relationships, feels like a breath of the freshest air, like a band finally unearthing their voice, creating a project that’s as erudite as it is enjoyable.

Opening with another arrangement of their self-titled song that sounds like it came straight out of Bon Iver’s discography, it doesn’t take long to notice that the band’s new album is a sonic left-turn. Poppy anthems are far and few between, replaced instead with songs heavily influenced by jazz, electronic, and soul music. Cuts such as “How To Draw / Petrichor,” “Surrounded By Heads and Bodies,” and the fantastic jazz standard “Mine” barely even sound like the group. A Brief Inquiry displays the band’s musical dexterity as well as their shrewd cultural competence.

The record is decidedly the group’s most vulnerable. On “It’s Not Living (If It’s Not With You),” Healy recounts in painful detail his addiction to heroin, explaining how he “collapses his veins” while still “wearing beautiful shoes,” showing the shallowness of celebrity and the disconnect between his gaudy exterior and broken psyche. This “20 stone monkey that (he) just can’t beat” is one of the pervasive themes of the new record. The emotional core of the album comes with the heavily affected “I Like America & American Likes Me,” as he pleads with an older generation of American people, begging them to listen to the cries of the world around them. Healy, just like the rest of us, has been through a lot over the past few years. And when he roars “What about these feelings I’ve got?” on the penultimate track “I Couldn’t Be More in Love,” recorded only one day before he went into rehab, we can’t help but hear this pain.

The other pervasive theme is the interrogation of the present. Over the course of 15 tracks, Healy attempts to capture a screenshot of contemporaneity, complete with Donald Trump-tweet lyrics and a monologue about the internet read by Siri himself. On “Sincerity is Scary,” Healy tackles insecurity in the online landscape, asking his audience “why can’t we be friends when we are lovers?” He delivers a message of self-acceptance to both himself and his fans on the album’s second song, “Give Yourself a Try,” which comes at a time when “your vinyl and your coffee collection is the sign of the times.” A Brief Inquiry deals heavily with the impact of technology, but one of its greatest strengths is that it doesn’t come across as a Black Mirror episode. Matty Healy is a smart man, who isn’t afraid of the technological unknown. He doesn’t lambast the cell phone-obsessed youth, because he knows he’s just as bad as they are. Instead, he simply wishes to ask questions, raising a mirror to society so as to observe the kind of dystopia we already live in.

Nowhere is this seen best than on the lead single, “Love It If We Made It,” which has quickly overtaken Mitski’s “Nobody” as my favorite song of the year. Pitchfork called it “the rare anthem for our generation that actually gets the job done.” It’s a song entirely about modernity, going so far as to quote the right’s “F*ck your feelings” motto and Trump’ infamous tweet, “Thank you Kanye, very cool!” But this modernity, Healy claims, has failed us. On the bridge, he recites like the endless scrolling of an Instagram feed some of the places modernity has lead us: “Consultation, degradation, fossil fueling masturbation, immigration, liberal kitsch, kneeling on a pitch…” The song uses a multitude of pop culture references to pinpoint an exact time in American history, and on the chorus, “I’d love it if we made it…” he sounds only semi-hopeful that we’ll get through it all.

Healy ends his record, though, with an plea for us all to keep trying. Using a familiar stadium-rock sound that’s been compared to Oasis, Healy discusses his decision to renounce his suicidal tendencies. He claims he always wants to die, but he knows that’s only his depression talking. He remembers the good things about this world, how we should give ourselves a try, and he issues a qualifier: He only wants to die “sometimes.”

A Brief Inquiry into Online Relationships is one of the rare albums that captures a panoramic image of the present while it is still happening, not after the fact. Other albums that come to mind for doing this are Prince’s Sign O’ The Times and Radiohead’s Ok Computer, which were each some of the greatest albums of their generation. The 1975 have created something truly special on this record, and I could not be more excited to see where they go on their upcoming album.