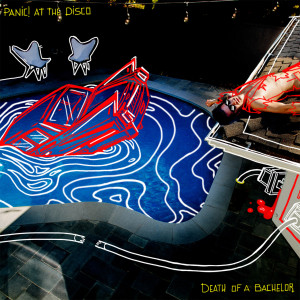 The cover art of Death of a Bachelor. (Image courtesy of panicatthedisco.com)

Possibly one of the most notable things about Death of a Bachelor is that it is the first time Panic! at the Disco wrote an album with only one member. After the departure of drummer Spencer Smith in April 2015, Brendon Urie was left to carry on and write what actually may be the band’s best album yet. Already, it has done much better than the previous four. In its debut week, it sold more than 190,000 album units and scored a spot as number one on the US Billboard 200, the first album by the band to accomplish such a feat.

We start off with “Victorious,” a song for anyone who needs to feel a little glorious. With its fast pace and pop-rock beats, the song is great for people in need of an impromptu dance party in their car. The next song on the album, “Don’t Threaten Me with a Good Time,” is also fantastic because here we see some of the lyrical wit that Urie is known for. Phrases like, “I’m not as think as you drunk I am,” and “I roam the city in a shopping cart, a pack of camels and a smoke alarm,” catch your attention and make you want to sing along.

The album is full of other great songs such as the spooky “Emperor’s New Clothes,” (seriously, you need to watch the music video for this one), and the smooth title track, which combines jazz, swing, and rock in the absolute greatest way. Overall, the songs are great and each of them carries the contradicting themes of living life like it is one giant party, and regret with acceptance of the mistakes in the past. Death of a Bacehlor is what an edgier Frank Sinatra living in Las Vegas would sound like.

However, the album ends on a somber note with a slow piano ballad called “Impossible Year.” The song consists of only a piano, Urie’s voice, and lyrics that remind you of hardships in everyday life. The song is a reflection of Urie’s struggles moving forward with the band, especially after the departure of Smith last year, and the simple struggle of becoming older and saying farewell to our youth.

Despite the somber ending, Death of a Bachelor is a good addition to your CD collection, or at least worth a listen to on YouTube or Spotify. It will make you laugh; it will make you cry, and most important of all, it will make you sing and dance. The new Panic! at the Disco album was one of the best ways to start off the year, and is a hint at all the great things to come from the band’s new lineup.