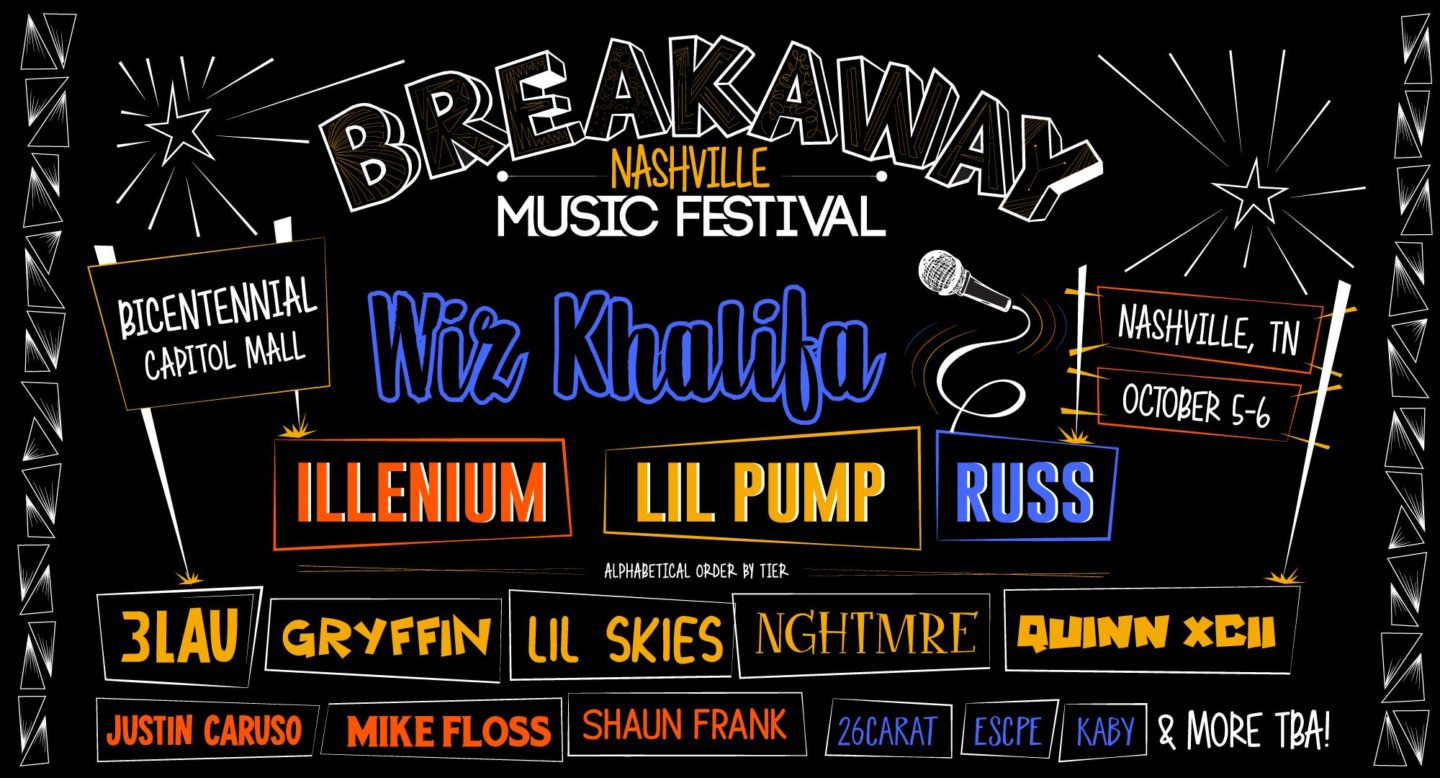 This past weekend I had the absolute thrill of attending the first ever Breakaway Nashville. Typically held in Ohio, North Carolina, and Michigan, this was the first year the festival headed to Music City. The festival was Friday and Saturday and we were fortunate enough to attend each day, listening to a variety of different artists. And while the festival still has a few kinks it must work out (naturally, as it was the first one), I believe this is such a great step for the live music scene in Nashville. The festival featured one main stage silhouetted by the Nashville skyline, with 18 different artists as well as a Silent Disco tent that raged throughout the day with multiple acts. Here are some of the highlights of the festival.

One of the best acts we saw on Friday was GRiZ-an EDM dj and producer, best clarifying his sound as “future-funk” or electro-soul. The reason GRiZ is unlike other EDM DJ’s I’ve seen in his sphere is because of his unique instrumentation – he plays the saxophone during his sets while mixing them into the tracks. This skill of his made his music so fun to listen to and watch, and added a performance level to a genre that usually has a certain level of divide between performer and viewer. He was not separated by his booth, but was instead reaching out to us through his jazzy sound, standing on top of it and playing his little heart out. Not only was his set engaging because of the sax, but he projected visuals that I could only describe as psychedelic art. GRiZ absolutely killed his set, and I can genuinely say I will be looking for his name on any lineup I see in the future.
The next and probably biggest performer from the weekend was Wiz Khalifa – rap’s OG marijuana rapper. Wiz Khalifa played a motely of his songs from his catalog, ranging from the classic “Black & Yellow” to singles off his new album “Rolling Papers 2.” The highlight of the show, however, had to be during his best-known song “Young, Wild & Free.” While the crowd sang along, probably lamenting on easy high school Saturdays, he brought out two giant RAW papers joints – throwing them into the audience while he lit up a real one on stage. Easy enough to say, the crowd lost their minds, with many individuals too lighting up to the highly appreciated song.

The next performer I enjoyed enough to include was Lil Skies – a rapper out of Pennsylvania enjoying the come-up from his major label debut mixtape “Life of a Dark Rose.” Lil Skies was not like most rap sets I have seen – his set featured cool visuals and vibey music, while still going as hard as his beats allowed him. And as much as I enjoyed hearing his own music, my favorite part of the set was when he gave a little tribute to Mac Miller. He played and rapped over two of Mac’s best known songs – “Donald Trump” and “Knock Knock”- and gave a little tribute to the influence the late rapper had on his own music. The crowd was electric – it was almost like Mac was there bumping along with us. I had not known much about Lil Skies before his set, but I’m really glad I do now.

The festival had an awesome lineup, the sets ran by schedule, and the tickets were not too bad (though they eventually rose to $120 for the two-day pass). The only fixes I could give recommend would be: 1. Water should be free (none of that $3 BS) and a water filling station is crucial with Nashville heat, and 2. Sometimes the music just cut off between sets, creating a few very awkward minutes of near silence. And while there is so much more I could say about this festival, I just wanted to close with how impressed I am by its inaugural event. Though the main stage was the focus of the festival, the Silent Disco cannot be slept on. We went to see a friend’s friend perform, though were pleasantly surprised by another DJ performing during the same slot. The technology utilized by the company allowed for us to switch between both DJs’ sets seamlessly, able to hear two sets during same hour. I’m looking forward to attending another similar event. All in all, I was blown away by this festival and will most definitely be back for Breakaway Nashville 2019!