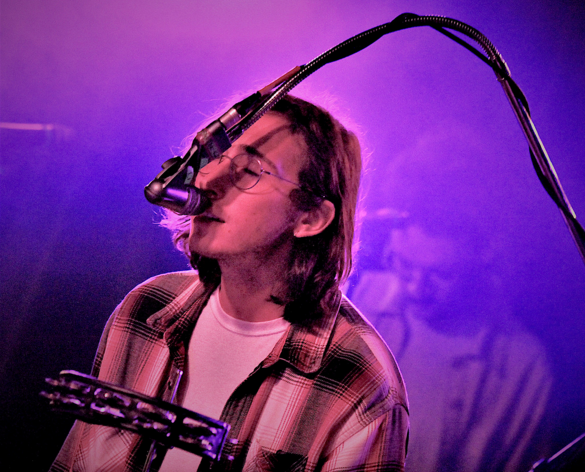 We caught up with Whitney’s Julien Ehrlich to talk about their upcoming tour kicking off tomorrow in Nashville, pre-show rituals, the next LP, and an exciting collection of demos to be released in November.

Whitney’s 2016 debut Light Upon the Lake mixed soft, sensitive vocals with often upbeat, ethereal sounds over an inviting jazzy backdrop. Their primary two members, Julien Ehrlich (vocals and drums) and Max Kakacek (guitar) were previously members of the band Smith Westerns. Chicago-based Whitney have been touring relentlessly since the widespread success of their debut album, playing shows both nationally and internationally.

(This interview has been edited for clarity and brevity. Interviewed by Meredith Mattlin for WRVU Nashville.)

M: Thanks so much for joining us! You guys are starting your tour tomorrow, right?

J: Yeah, thank you! And yeah, we’re starting our tour tomorrow—we’ll be playing in Nashville.

We’re excited for the show! Do you want to talk a little bit about the tour? You’ve been doing a lot of touring lately—what’s been the hardest part?

The hardest part was, well….I don’t wanna get too dark, but the amount of touring we took on—though it was completely beneficial, and we love doing it, we love playing shows and doing what we’re passionate about for a living—but it totally destroyed some of the relationships that we had built before this whole thing happened. So yeah, there were a couple weird times where me and Max knew that we were in love with the girls that we were with before Whitney happened, but it totally…it derailed us, led us astray. We definitely were not, you know, the most amazing boyfriends. I feel like it’s just pretty hard to, you know…

Yeah, I mean—there’s that. And I mean my family doesn’t really expect me to contact them all the time, but actually I do a good job at that. But yeah, it just kind of destroyed our romantic relationships and now it has taken the last three or four months to repair them. Both of us, actually. At the same time, which is weird.

Yeah, that makes sense, considering you guys are on a parallel schedule with touring and everything. It does sound taxing. I saw that in addition to all that, you guys announced an album of demo recordings today.

Yeah! That was the label, really—they really wanted to do that. They’re awesome, really. They realized that we’re touring our butts off so we don’t really have…we can’t even think about release schedules and stuff, so that was really their doing and what they wanted to do. And they put it together so nicely and the packaging looks so good! Our label’s work ethic is—they match us somehow, which is really cool.

Secretly Canadian is your label, right?

Yeah. They’re great. They’re awesome. And “You and Me,” one of the demos that didn’t make it onto the record, just got released today. So hopefully people enjoy that. We like that song too, honestly—it just has a bunch of synths on it and shit—wait, am I allowed to curse?

Cool, word. [laughs] Yeah, we really like that song. But it has synths and stuff on it, which is ridiculous. It’s just not our vibe—the whole concept around that song was, like, ‘Whitney goes to LA and has a weekend on whatever drugs and alcohol and makes this stupid dance song.’ But we think it turned out well, too.

Well we’re definitely looking forward to hearing the whole album. That comes out in November?

Do you think you’ll be releasing any more covers of songs? You guys sometimes play covers at your shows and have recorded a few—is there more where that came from?

Max and I have talked about it, I mean, all of our focus and attention right now is on the next Whitney album—you know, of originals. [laughs] We briefly talked about when the journey of LP 2 is over, we’re probably going to do a cover album. We haven’t talked to the label about it at all, but it seems to be something that just…I don’t know. We’re good at doing it. And I think we have pretty good taste, obviously—so, I don’t know…[laughs] That sounded…that sounded super douchey.

No, not at all. I’ve seen you guys perform some of those covers live, and they always sound awesome. So you said you’re working on LP 2—has that been slow going because of all the touring? Or have you been working on that in earnest?

It’s been such a whirlwind. We have managed to complete around thirty percent of it. We haven’t gotten to a halfway point yet. But we have four songs that we’re really excited about, and they’re not completely finished, but they are, in our opinion, stronger than Light Upon the Lake.

Awesome. We’re really looking forward to that. Speaking of this second LP that you’ll eventually be releasing: you guys have a very unique sound, and incorporate a lot of different things into your music, and I’m curious where you draw influence from.

For the next album? Hmmm. I guess…well we didn’t really get into The Band until after me and Max had completed Light Upon the Lake, which is strange because we’ve been compared to The Band, but, you know, we just accept the correlation. But we’ll probably sound a bit more like The Band on the next record. And also, me and Max started listening to Labi Siffre a bit. A lot of his songs are super spazzy and crazy and I cannot get down with them, but I feel like when he was focused, he is one of my favorite songwriters of all time. He’s written some songs that…you’re just instantly jealous of them. He’s got a few songs that—we’ll never do direct rip-offs or anything, but you know, some of them could have a Labi Siffre vibe.

Oh, wow. That’s going to be really cool. So you say you and Max started listening to Labi Siffre and everything, but obviously there are a lot of other musicians involved in Whitney—so what’s the dynamic like in the band in terms of both friendship and making music together?

We’re all definitely good friends. Like, the whole band went out for brunch two hours ago. It’s good. It’s weird—it’s like we’re finally on some down time before we leave tomorrow…it’s kind of funny to run into band members around the city because there’s so many of them. And to see, kinda, the thing that we’ve created, everyone involved…it’s almost like, I’ll run into Will, and it’s like, ‘oh yeah, he seems popular at the bar now!’ [laughs] I’ll run into Malcolm or something…I don’t know, we kinda created a weird thing, and me and Max didn’t realize that that was ever gonna happen. That the ‘Whitney crew’ would be a thing, a popular thing, around the city—I don’t know, it’s strange. 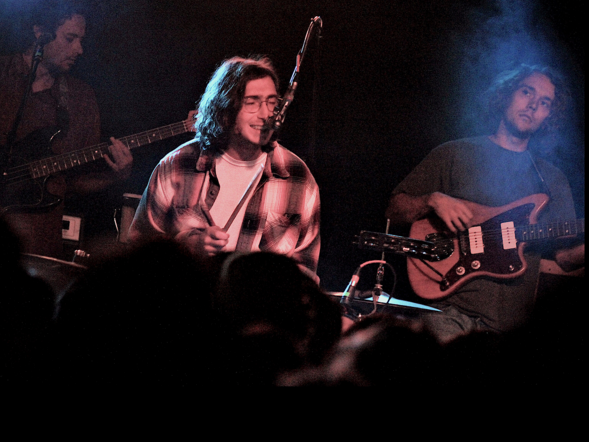 That’s definitely a good thing to establish, a kind of circle. So, since you guys are about to embark on tour, and you’re starting in Nashville playing at the Basement East…

Have you guys played there or been there before?

No [laughs]. What’s the deal with it? Last time we did The End or something…

Hmm, was it Exit/In?

That’s what it was, yeah.

Basement East is probably a little bigger than Exit/In. It’s basically the east side outpost of The Basement, which is literally in the basement of a record store here called Grimey’s. It’s definitely a cool spot.

Cool! Yeah, we saw in the last couple days we had a venue switch, which…I don’t know. [laughs] I just never considered Nashville a place where we would play, like, a thousand-cap room anyway. So it feels better to be…I mean as soon as we switched it to Basement East the presale jumped fifty or sixty tickets and now it looks like it could sell out, which is cool. We’re psyched.

Yeah! It should be really fun. And I guess there are always surprises like that when you’re on tour. Do you have any standout shows or specific memories of weird things that have happened on tour or anything like that?

Lollapalooza was great. That was special…it was special in the sense that I knew that we were playing really well and personally I was like, ‘wow, I’m doing really well,’ [laughs]…during the show. But everything was happening so fast. We had Joey Purp come out and put one of his songs that he’s never released over our instrumental, and that was such a high point. And we had our buddy Finally Aaron finally come out and sing with us. There was just so much to pack into 45 minutes that it kind of was such a blur to me, but then I’ve realized since then from talking to people and seeing people’s reactions on the internet—like, woah, that shit was really, really special. It was really also pretty stressful, but it was great.

That’s incredible—that’s an insanely huge festival, so I guess it makes sense that it was a really unique experience.

Yeah, it was really cool.

Do you guys have any pre- or post-show rituals or weird stuff you do before playing?

We do a thing called the cinnamon roll. Which is…it was taught to us by a friend of ours. You need at least, like, four people. Everyone puts their hand out straight, vertical—palm is vertical, I guess—but holding your arm out straight [laughs]. And then, on three, everyone just curves their fingers in towards their wrist. It looks like the way a cinnamon roll rolls up. I hope I explained that correctly…[laughs]

I can kind of picture that. Is that a ‘good luck’ kind of thing for you guys?

Yeah, I guess it’s just kind of a way to get everyone on the same page. Which, no one is ever on the same page, truly. But it’s a way to, you know…everyone snap and we’re somewhat in the same mindset. Pre-show can be so stressful, so yeah.

Yeah, I could imagine. So—given that—what are you looking forward to most on this next tour?

I’m psyched for this tour just to be in the south; it’s been a little while. And…also, to go even further south and go to South America. We’re doing Mexico and other places in South America in November, and none of us have ever been there, I don’t think, so I’m really psyched for that.

I can’t believe it’s so soon. I need to pack! [laughs]

Haha, well we’ll let you get to that, then—thanks for chatting with us!

Thank you! See you tomorrow!

Listen to Whitney’s “You and Me” from their upcoming demos album below, and see them September 29th at the Basement East.