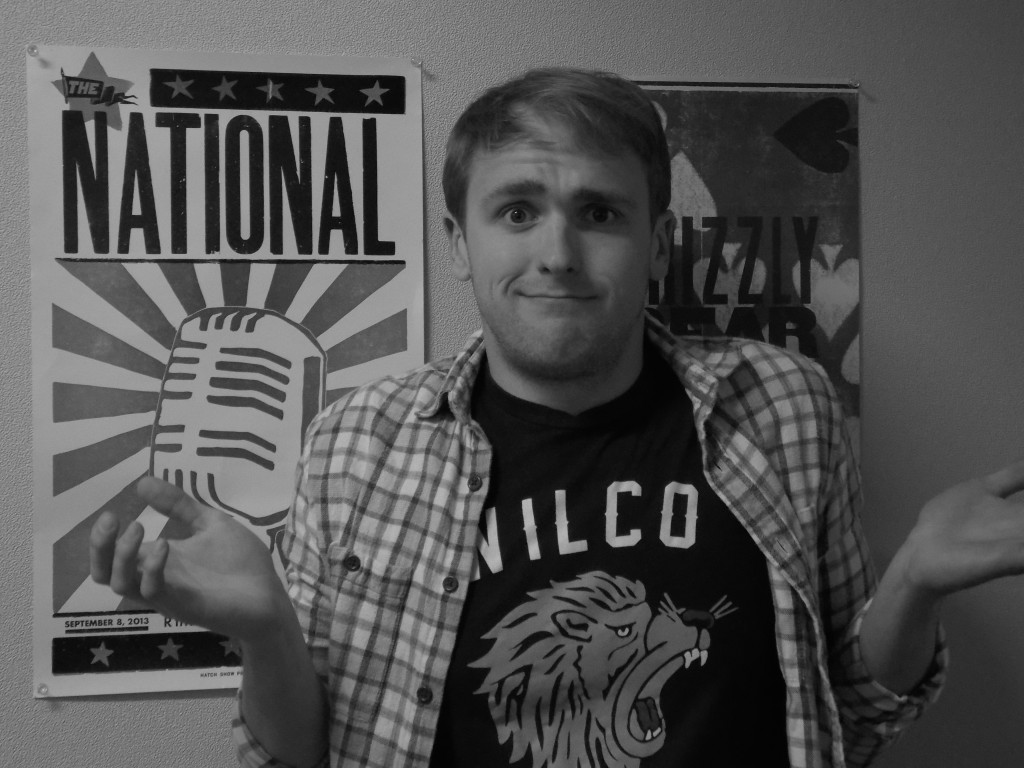 What’s a writer to do?! (Photo by Jamison Stoike)

Today is April 14th, and that means that school is finally winding down. For our seniors, however, their entire Vanderbilt career is in its final chapter; graduation is only four weeks away, and now WRVU’s graduating DJs only have a few radio shows left. So this week, I thought I’d sit down with a senior DJ and talk about his specialty show, what makes it unique, how he’s managed to keep his shows fresh for four years, and if he has any parting thoughts.

(Do you know how hard it is to schedule an interview with people this time of the year?! I swear I’m not trying to be self-aggrandizing. I’m simply out of options!)

What is Evil Home Stereo?

The name actually comes from a Modest Mouse song — “Bukowski.” Modest Mouse is my favorite band, so it seemed an obvious choice. For most of my time at WRVU, Evil Home Stereo has just been a standard WRVU show: mostly indie, some classic rock, some electronic music. But I’ve always liked doing themed shows, lists, and countdowns. I’ve done a few shows of video game music, and people told me they really enjoyed them. So I decided to sort of run with that, and do only themed shows for my last semester. Every week’s different, and I announce it on my shows Facebook page the day before.

What are some of your favorite themes that you’ve done?

I did “Songs About Animals” last week, which was really fun. I played stuff like Radiohead’s “Weird Fishes,” Pink Floyd’s “Sheep,” even Spoon’s “The Beast and the Dragon, Adored.” I’ve also counted down my 15 favorite albums of the 2010s, and that was exciting. My favorite was probably my video-game themed week, though. It’s something that most of my listeners have never heard and never even think of, so it’s fun to share that with them.

Do you know any more themes you’ll cover before the end of the year?

I’m going to try to sneak in a two-hour countdown of my favorite albums ever before I graduate. I’ve never done an “all-time” list before, so it would be cool to see how the albums I love from before 2000 — The Lonesome Crowded West, Summerteeth, Animals, Countdown to Ecstasy — stack up against more recent releases.

How have your musical tastes changed over your four years at WRVU?

I’m definitely more interested in a wider variety of genres and sounds than I used to be. I’ve also gotten into noiser, avant-garde, post-rock stuff, like Swans or Godspeed You! Black Emperor. Even the noisier tracks by Wilco — songs like “Misunderstood” or essentially the entirety of Yankee Hotel Foxtrot — I like a lot more than I did as a freshman. The same goes for the more repetitive, droning tracks by Atlas Sound or Radiohead. And as my tastes have changed, that’s been reflected in my show. Freshman year I played a lot of the Beatles, the White Stripes, and Grizzly Bear. Now, I play a lot of Destroyer, Joanna Newsom, and Godspeed You! Black Emperor. So I think that’s kept my show from getting stale, both for me and my audience. I’m always trying to listen and play newly-discovered music.

Most interesting phone call you’ve received during a show?

Sophomore year I got a request to play Snoop Dogg’s “Gin and Juice,” which was definitely odd. Especially considering that I was probably in the middle of a song by Fleet Foxes or something! Of course, I actually played it. I saw no reason not to, really. Anything to get listeners!

I said Modest Mouse earlier, but it’s honestly very close between them and the Decemberists, and maybe Pink Floyd. But…I’ll stick with Modest Mouse.

Definitely The Moon and Antarctica by Modest Mouse, without a doubt. It’s hard for me to imagine a better 60 minutes of music than that.

And do you have any advice for other WRVU DJs?

Honestly, just don’t forget how cool it is that you’re on the radio in the first place. I know we’re online-only now, but…it’s still a privilege to be able to use this platform to play music for the world. And I really do mean the world. We’ve gotten emails from listeners as far as Russia and Antarctica, so you never know who is listening. It’s not just your parents! And as a graduating senior, I’m going to miss being able to simply go into the studio each week and play music. It’s been an honor.