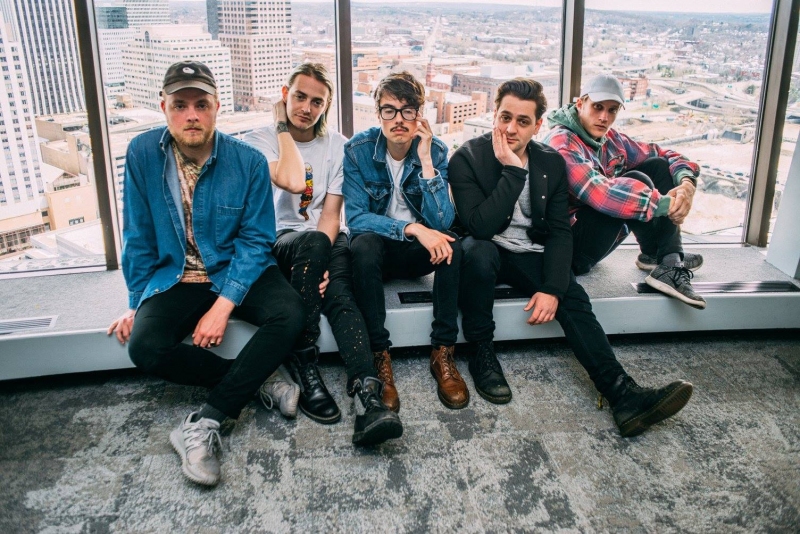 Atop the dark stage in the large ballroom of Nashville’s The Basement East sit six vintage television sets, arranged in a cultish semicircle. I’m here to see Joywave, the glitchy indie-pop group from Rochester, New York. They’re 10 minutes late. I begin to look at my watch when I hear a dull murmur emerge around the room. As I lift my gaze, I see a single man emerge from the darkness. A dim light illuminates his body from below. I can’t make out his face, but I can see his shirt strikingly clear. On it reads one succinct sentence: “I don’t like corn dogs, but I do like Korn, dawg.”

At this moment, I knew I was in for a treat. Immediately, a deep synth begins pulsating throughout the room. The cacophonic sound grows increasingly louder as people throughout the room start to cheer for the headlining band. Then, with a crash of drums, synth,  and electric guitar, the remaining four members of the rock collective leap onto the stage. The lead singer, Daniel Armbruster, bursts into ardent singing of the band’s opening song “Content.” From this moment onward, the show is an unremitting wave of bombastic energy. The television sets carefully programmed to display atmospheric shapes and accentuations to their music.

Throughout their hour-long set, the group hardly stopped to get a word in, transitioning nearly seamlessly from each song to the next. This is a practice I’m not generally a fan of, but the group managed to do this so artfully I didn’t even mind. When Armbruster did stop to speak, he spoke with an assured, somewhat cocky tone. He brought quirkiness and humor to the already dynamic show. One stand-out moment was when he told a story about their performance on Stephen Colbert’s show, in which they secretly pulled some strings the teleprompter operator and had Colbert refer to their new album as “Grammy-eligible” on live TV.

The band weren’t the only people that seemed to be in their element at this concert. The crowd, which was a surprising mixture of people from age 18 to mid-50s, seemed to be enjoying themselves in a truly special way at this show. A good number of people in attendance felt emboldened to talk to people they  seemingly did not know before coming, and friendships were blossoming all around me. Right in front of my eyes, a grown man and teenage boy began talking, and within minutes the man was tossing the boy up into the air as if he was his son. It was magical to watch.

The band performed 18 songs, most of which were from their new album, save for a few fan favorites such as their stellar closing number, “Tongues.” Overall the concert, was an exhilarating display of glitch pop and gritty rock, and an excellent way to spend a Wednesday evening. The group’s newest album, Content, is out now on Culto Music/Hollywood Records.