On October 25th, 2019, the planets aligned in such a way that brought Kacey Musgraves and Maggie Rogers under the same roof, and absolute magic happened. The two female superstars celebrated the end of their tours, the “Oh, What a World II” tour for Kacey, and the “Heard It in a Past Life” tour for Maggie, celebrating her debut album.

I arrived shortly after Yola began her set, taking refuge in Bridgestone from the beginnings of 24 consecutive hours of rain, or a normal Nashville day. The British soul singer earned the admiration and respect of those who had already arrived and those who shuffled in during her set, with a voice so powerful that I bet she could reach the corners of Bridgestone without a microphone. 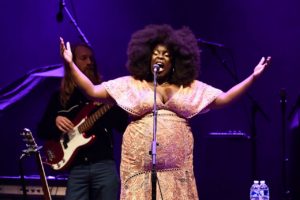 As the arena filled up, Maggie Rogers began her bubbly and engaging set, with her unmatched energy that she displayed all tour cranked up to the max. Though she had just played two sold out nights at the Ryman the previous week, the Nashville crowd was particularly excited to welcome her. After a short speech about how this tour ending meant another door opening, she played a new, upbeat and feel-good song titled “Love You For A Long Time” whose studio release date is unknown but highly awaited. At her last track, “Light On”, came to an end, Rogers was overwhelmed with emotion as Bridgestone was lit up with cellphone flashlights, illuminating the arena in a public display of support for Rogers’ incredible first album and connected tour. 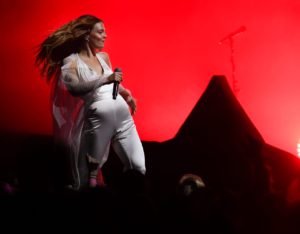 And at 9:45, when Kacey Musgraves and her band took the stage, a crowd of over 18,000, a new record for a female performer at Bridgestone, erupted and immediately stood up as “Slow Burn” began. Her flowy and confident voice gave me goosebumps that did not disappear until the end of the night.

Musgraves gave a brief speech in which she reflected on the album “Golden Hour” which came to exist in Nashville, and was celebrated for the final time in the same place.

“It feels like one big victory lap of sorts. And I’m just so happy that I’m in Nashville, and we’re all together. I’ve got family in the house. All my friends are here. So many people in this community that I look up to and just admire. And of course, I could never have had this much love and positivity coming out with this record without you guys.”

Musgraves pulled from her earlier albums as well, with classic “hometown culture” tracks like “Merry Go ‘Round” and “Family is Family”. Sitting in the audience where Musgraves was no more than a tiny piece of my view, it still felt like everybody in the audience was part of Musgraves’ family, as she joked around with her band and referred to the screaming crowd like an old friend. The crowd gave back, giving their tears and their voices to track after track, affirming the belief that nobody is just a “casual” Kacey Musgraves fan: there are only diehards. 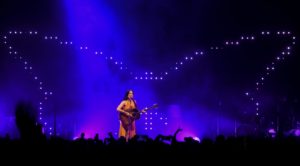 Kacey Musgraves performs at Bridgestone Arena, courtesy of The Tennesseean

However, this show was more than her average concert, it was a celebration and full of surprises. Maggie Rogers joined Musgraves back on stage as the two performed a vocally flawless rendition of “I Wanna Dance With Somebody”, the song that has come on after every one of Rogers’ sets during her tour. 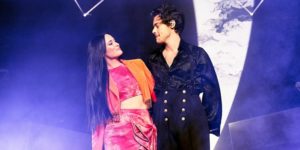 Harry Styles made a surprise guest appearance during “Space Cowboy”, courtesy of Pitchfork

The biggest surprise of the night came in the middle of “Space Cowboy” as Harry Styles, who Musgraves opened for in the past, appeared out of absolutely nowhere and joined Musgraves in finishing the song, though it was partially drowned out by the screaming fans who were emotionally unprepared for his appearance, such as myself. The reunion between two incredibly talented and publicly loved artists was a great representation of the night’s goal: to celebrate an incredible album with close friends.

As the night came to an end and I was forced back into the now torrential downpour, I was only mildly upset with being soaked, but instead distracted by the realization that I had just witnessed a historic show, and two of the best performances from two of my favorite artists.

Maggie Rogers and Kacey Musgraves are absolutely deserving of their fame, and they have used it to build a platform of love and empowerment. Being there that night felt like an honor to support two artists who have used their fame to build others up, and it is certain that their careers are only just beginning to grow.