After over a year of teasing the album and not meeting his self-imposed deadlines, Kanye West has finally released his long awaited album Jesus is King. Fortunately, this time Kanye actually met his release date of October 25 that he had announced a couple of days before on Twitter. The album comes shortly after Kanye publicly announced he was going to exclusively make gospel music moving forward after something of a spiritual awakening for him. This isn’t really anything new for fans of Kanye’s music, as Kanye hasn’t had a normal album rollout since Yeezus in 2013. When Kanye released The Life of Pablo in 2016, for example, the album itself was still sort of a work-in-progress, and would see many changes to the mixing and an overhaul of the song “Wolves”. Since then, Kanye’s erratic behavior has only gotten worse, so fans almost expected the release date posted on Twitter to just be another tease. The album actually came a couple hours late, which Kanye attributed to fixing some mixing issues on Twitter. After listening, it’s easy to tell the album was hastily mixed, as sometimes the vocals are too loud while at other times they are drowned out by the bass and drums. 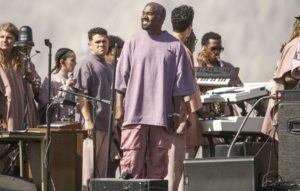 The production on this album is great, which is to be expected from Kanye. While there is certainly plenty of religious lyricism and symbolism on the album, there wasn’t as much gospel-influence as people expected there to be. The intro track “Every Hour” is the only pure gospel song, which features Kanye’s Sunday Service Choir. The rest of the gospel-influence is heard through samples and choir harmonies over Kanye’s usual rapping and singing. While the production on Jesus is King definitely meets Kanye standards, the lyricism on the project is noticeably weak, much like his last album ye. The album feels very scattered and only loosely tied around religious themes and motifs. This could be because Kanye once again rushed this album after scrapping what he was working on over the last year. We don’t know the exact time frame that Kanye spent working on Jesus is King, but we do know from past leaks that this is a completely different album than Yandhi, the spiritual successor to Yeezus that had been in production since September 2018 that Kanye had claimed he was going to release last month. Seeing as we now know that the entirety of ye was made in the 2 weeks after Kanye scrapped his previous work in the wake of his extremely controversial rant on TMZ, It’s likely that Jesus is King was also made in the last few weeks or months after he abandoned Yandhi. Kanye even acknowledges the scrapped album on the track “Selah”, where he says that “Everybody wanted Yandhi, Then Jesus Christ did the laundry.”

Despite all this, Jesus is King is still a decent album that shows Kanye still has the talent and creativity to push boundaries on the sound of hip-hop. While I wish it was longer, I ultimately enjoyed the album even though it does not live up to his previous work. Much like ye, it feels rushed, less thoughtful, and ultimately not as creative and innovative as Kanye’s work has proven to be in the past. Perhaps what Kanye needs is to take another break to regroup his thoughts and plan out his next project, much like he did while creating arguably his best album: My Beautiful Dark Twisted Fantasy. Will Kanye continue making clean gospel music? No one knows for sure right now. Kanye has already announced a new album, Jesus is Born, to be released this Christmas.