Sixteen cellos, one piano, and four dads from Utah. Together, they’re The Piano Guys. 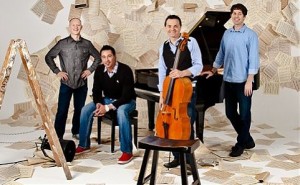 Best known for their YouTube videos in which they combine classical music with pop songs, The Piano Guys played at the Ryman last weekend to a very enthusiastic crowd.

If you’ve never listened to their music, you should click on the link above. It will add some context for you.

So to begin the show, pianist Jon Schmidt and cellist Steven Sharp Nelson came on and performed their mashup of Let it Go and Vivaldi’s Winter. After gaining the crowd’s attention, they then proceeded to introduce themselves and banter back and forth, a format that would continue for the rest of the night. It was clear to everyone present that they had a very good rapport with each other and it definitely helped the audience get into the show. Interspersed with actual commentary about the songs they were performing, Schmidt and Nelson also added fun facts and stories about the band in between songs.

As it turns out, The Piano Guys began when piano shop owner Paul Anderson met Schmidt. In an attempt to sell more pianos, Anderson asked Schmidt if he could film him playing one of the pianos in the store. His reasoning was that if people saw how great pianos could be, then business would be great and everyone would want to buy a piano from him. Unfortunately for Anderson, that is not the way it worked out. Instead, the videos themselves became so popular that The Piano Guys developed a large YouTube following. Along the way, they found Nelson who added the cello into the mix. As of the night of the concert (Saturday, September 6th), Nelson had 16 cellos that he could use for the videos. However, as he joked about throughout the night, he still had to be a ‘Piano Guy’.

The setlist varied throughout the night. Due to the collaborative nature of the songs, The Piano Guys’ music naturally has a variety of songs, and they tried to make sure that they played a sample of everything for the audience. After their initial performance of Let It Go/Vivaldi’s Winter, they played some of their more popular pieces like Titanium/Pavane and Code Name Vivaldi (a Vivaldi/Bourne Soundtrack mashup). They also played a few straight covers of pop songs before seguing into solo performances.

For their solo performances, Schmidt played a couple of original compositions. He played two songs. His first one was a composition that reminded him of Christmas, and as he told it, the second one got him the prettiest girl at school for a brief period of time. After that, Nelson swapped places with Schmidt and played a few songs. To do so, he asked his sister who lives in Nashville to come on stage and help him play. It was a really sweet moment, and added a nice break from the comedic exchanges he had with Schmidt.

At the end of the concert, Schmidt and Nelson played a few romantic songs for the couples in the room, and they played a cover of Les Miserables’ Bring Him Home dedicated to all the military families in the room. Once they left the stage, they received a standing ovation and came back out for an encore with the other two members of their group: Paul Anderson and Al van der Beek. After a brief introduction, they proceeded to perform their cover of One Direction’s What Makes You Beautiful which involves the very creative use of the piano. I’ll leave a link for you guys here:

What Makes You Beautiful by The Piano Guys

In summation, I would have to say it was an amazing concert. They did a great job of connecting with the audience and really making the concert an interactive experience. They had excellent stage presence, and most importantly, they had the talent to back themselves up. If they ever come back to Nashville, expect me to be sitting in the front row.