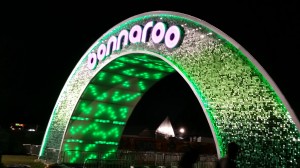 Ah, Bonnaroo 2014. As I wrote this post, I had a difficult time formulating the proper words to describe my experience. Well first of all, I’ll say when I set out for Bonnaroo on Wednesday night, I knew it’d be a great time, but I had no idea that after I got back home on Sunday, I’d be thinking I had the best weekend of my life.

If you’ve never been to Bonnaroo, you may be wondering what makes it so special, what distinguishes it from all the other summer music festivals. Bonnaroo, like any other music festival, isn’t just about the music; there are other factors that add to the overall experience: the festivalgoers, the campsites, the food, etc. (side note: speaking of food, for anyone planning to attend Bonnaroo in the future, you have to try an Amish doughnut. It’ll seriously change your life.) It’s the combination of all of these things that forms the enjoyable, wild, and totally unique experience that is Bonnaroo.

All ramblings aside, here is a breakdown of some of my favorite shows from my weekend down on “The Farm.”

Thao & The Get Down Stay Down 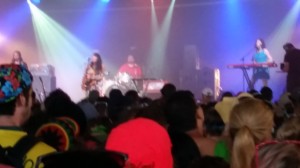 This was the first band I saw at Bonnaroo. Thao & The Get Down Stay Down is a jammin’ indie-folk band originally from Virginia, now based in San Francisco. They were really fun to watch, as they gave a really energetic performance. They wowed the crowd and made everyone dance, all the while paying tribute to their southern roots with a bluesy, twang-laden tune or two. 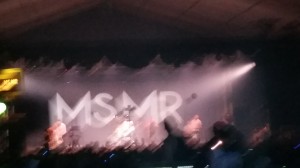 After hearing Secondhand Rapture, MS MR’s debut album, I was pretty excited to see the band perform live, and they met all my expectations. Waning applause from the previous show faded into MS MR’s dark wave rendition of Arctic Monkeys’ “Do I Wanna Know?” They also played “Dark Doo Wop” and other favorites from Secondhand Rapture. One of the most memorable moments of MS MR’s set was their cover of LCD Soundsystem’s “Dance Yrself Clean.” Now, this song is famous for its sudden transitions from barely audible to explosively upbeat. What was surprising about MS MR’s cover, however, was their take on those transitions. The loud parts weren’t loud at all. True to their style, they kept the entire song mellow and ominous. The audience was obviously shocked by that at first, but I think most people appreciated the fact that MS MR added their own, unique spin to an indie favorite. 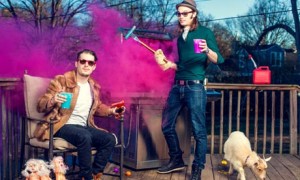 So, I saw these guys back in April at Rites of Spring. They had great energy and put on a good show, but I must say, they were better the second time around. I’d say the main contributing factor as to why their Bonnaroo performance was better was the audience. When you have hundreds of people shoving their way to the front of the stage and not caring at all whom they knock over or elbow in the face (lookin’ at you, Rites crowd), that can kind of detract from the experience. Overall, the Bonnaroo crowd was much more chill. Everyone gave each other a reasonable amount of space, so there was enough room for everyone to dance, jump, and groove along to the music. 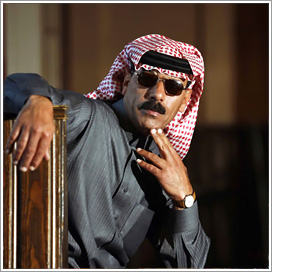 Two words: Omar. Souleyman. This was indisputably the best performance of the first day of Bonnaroo and, in my opinion, the second best performance of the entire festival. My apologies for not having taken any pictures or videos, but there was so much dancing, jumping, and general merrymaking from the crowd that it was impossible.

Omar Souleyman is a Syrian musician who performs traditional Middle Eastern music. Every song he played was upbeat and danceable, and the crowd loved it. The entire show felt like an all-night dance party in a Syrian nightclub. Fast, steady beats, plus reedy background noises, plus Souleyman’s undulating Arabic and Kurdish melodies floating above everything else adds up to one incredible show. 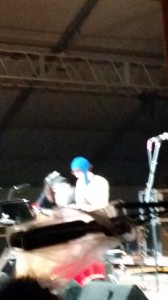 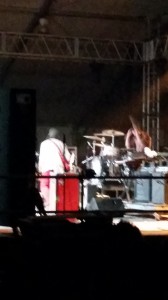 Ah, Neutral Milk Hotel. When this year’s festival lineup was announced, and I saw that NMH would be making an appearance, I was ecstatic to get to see them a second time. After seeing them perform last October, I didn’t think there was any possible way they could be any better live. Somehow, they managed to blow my mind a second time. Their musical prowess rivals that of most other bands out there. It’s simply mind-boggling how they can play so many instruments, some of which are pretty atypical for an indie rock band. When the band came on stage that balmy Friday evening on The Farm, they filled the stage with guitars, accordions, a plethora of brass instruments, and Julian Koster’s famous singing saw. As they played, they commanded the stage. When NMH played, the audience listened. When NMH sang, they audience infallibly sang along with them, knowing all the words to every song. And whenever NMH finished a song, the audience cheered as if God himself had just descended from heaven and played “In the Aeroplane over the Sea” or “Two Headed Boy.” In a way, that’s what it felt like. Overall, Neutral Milk Hotel gave a truly awe-inspiring performance, as well as one of the best shows of the festival. 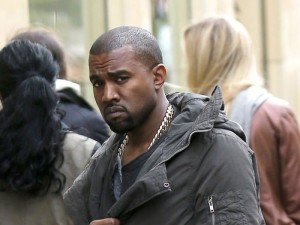 “‘Ey yo, where the press at?!” I picked this show as one of my festival highlights not so much because it was an outstanding performance by a true musical genius, but because it was interesting to the point of being bizarre. Fortunately, this year, Yeezy appeared on stage at his scheduled time, a huge relief to all those who feared a repeat of the disaster of Bonnaroo 2008. As expected, he went on numerous nonsensical rants in-between songs. Actually, he paused mid-flow several times to demand the location of the press and bash them for writing bad reviews of his 2008 performance (hence, the now famous line “Ey yo, where the press at?!”). He also rambled about port-o-potties and graffiti and about how he was the greatest musician alive, better, in fact, than actual musical geniuses, like Mozart, John Lennon, etc. Even though Kanye absolutely delivered on songs like “New Slaves,” “Black Skinhead,” and “Blood on the Leaves,” the weirdness of his rants, and his unabashed arrogance in comparing himself to John Lennon and Mozart, detracted from his performance and disappointed even the most diehard Kanye fans. 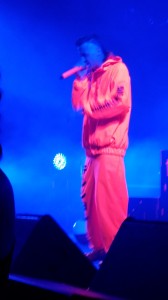 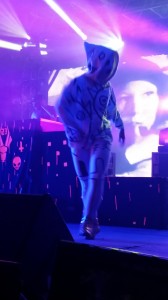 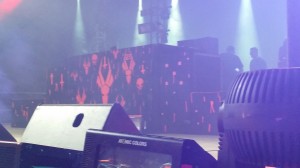 Oh man, these guys were crazy, and by crazy I mean crazy good. Before Ninja, Yo-Landi, and DJ Hi-Tek came out, I wasn’t sure what to expect. I figured they’d put on a relatively normal, but entertaining show. Yet a small part of me was afraid they’d come on stage in blackface ala “Fatty Boom Boom.” Luckily, there was no blackface, and all was well. Die Antwoord’s set was a wild ride from start to finish. Close-ups of creepy faces on the projector gave way to eerie electric blue lights and DJ Hi-Tek (face covered with a mask, of course) dropping sick beats before Yo-Landi and Ninja came out. All three were clad in red sweat suits, with the band’s logo printed on the hoodies, and gradually removed layers of clothing throughout their set (don’t worry, no one got naked). They wowed the crowd with favorites such as “I Fink U Freeky,” “Baby’s on Fire,” etc. Ninja rapped in his rapid-fire South African flow, while Yo-Landi danced and occasionally interjected with her piercing, high-pitched screeches. Overall, it was the wildest, “freekiest” party at 2am. To end their set, Die Antwoord thanked the crowd and departed with a rather cordial “F*** KANYE WEST!” 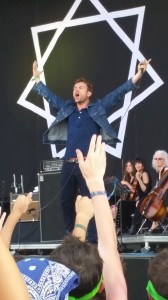 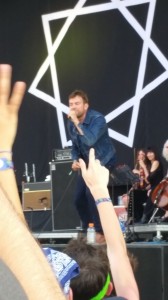 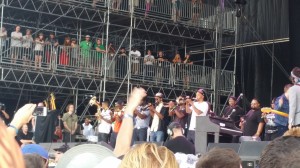 And the award for best show of ‘Roo 2014 goes to… Some may argue with me, but I think this was, without question, the best show of the festival. This show was highly anticipated by many Bonnaroovians, and Damon Albarn didn’t disappoint. The creative genius behind The Gorillaz proved just how versatile he was; he showcased a variety of styles and instruments. Albarn showcased his sentimental side with soft, beautiful piano ballads and a touch of innocence with a ukulele song dedicated to a baby elephant named Mr. Tembo. He also collaborated with some of his rapper friends to surprise the crowd with the mid-2000s angst of Gorillaz favorites “Feel Good Inc.” and “Clint Eastwood.” There wasn’t a single second of that set in which the crowd wasn’t jumping, dancing, cheering, and/or singing along. This was a truly incredible show that wasn’t just a performance; it was an experience. 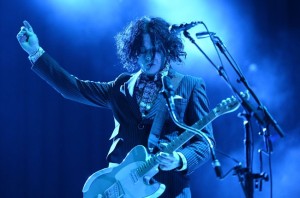 Of course, I’d be remiss if I didn’t mention Jack White’s incredible set (and subsequent 45-minute-long encore). There was no doubt he was in it to give his audience what they paid for. He performed repertoire from his solo work and other projects (The White Stripes, The Raconteurs, The Dead Weather, etc.) and paused every so often to get philosophical with the audience. He talked about the beauty in making music and sharing it with people who will appreciate it. He also remarked on the generally positive and welcoming atmosphere of the festival. And during his encore, he asked the audience one or two times if they were tired or wanted him to stop playing. How nice of him to consider the feelings and wants of the audience! Even though Jack White played on until nearly 2:00am, the audience showed no signs of fatigue or annoyance at his 45-minute-long encore. 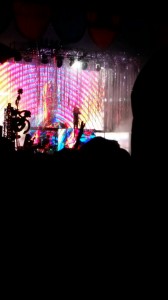 Although I only caught the very end of The Flaming Lips’ set and can’t say anything about their performance as a whole, the final fifteen minutes of them I did see were some of the greatest fifteen minutes of my life. For their encore, they played “Do You Realize,” which was to be expected, because it’s their most well known tune. When that ended, I thought that was the end of the set, but no! After that, they transitioned into my favorite Beatles song, “Lucy in the Sky with Diamonds!” The combination of Wayne Coyne’s piercing falsetto, the charming simplicity of that song, and the psychedelic Technicolor joyride happening on the big screens brought tears to my eyes. Yeah, yeah, call me pathetic, but I cried literal tears. It was that powerful. 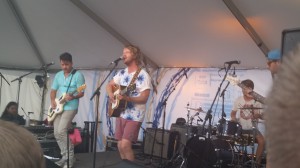 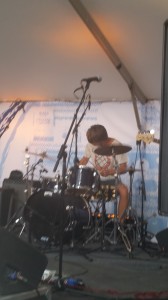 Cayucas is a delightful indie rock/surf pop band from California. They played their set on the Sonic Stage for New Music. It was probably the smallest stage of the festival, but that place filled to capacity with enthusiastic fans. I really liked the smallness of the Sonic Stage, because it made for a more intimate atmosphere. The band and audience could see each other clearly. Cayucas’ set, overall, had the feel of a private show for a friend’s house party. Cayucas performed music from their 2013 debut album, Bigfoot, and threw in a super catchy new song called “Hella” towards the end. After their show, the band stuck around to talk to and take pictures with their fans. I asked if I could interview them, to which they graciously agreed, but I didn’t get the chance to, because they were on a tight schedule. That’s totally understandable. I may not have gotten to interview them, but I did get to at least talk to the bassist for a bit and hug the drummer, which was pretty cool! Cayucas are all incredibly nice guys, and if you get the chance to see them live and talk to them, you definitely should.

Final note: unfortunately, all of my video clips were too big to upload onto WordPress. 🙁 However, if you want to take a look at them, you can view them on Dropbox! Link is posted below, and all videos tagged with a red circle contain profanities. https://www.dropbox.com/sh/89s3kuenx7fz2mh/AAAJmdqz_h-U_SWNhT_rrUnoa?dl=0