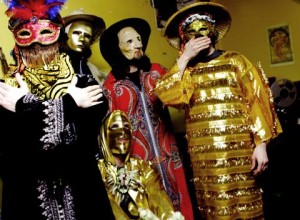 As I have been browsing through my music collection, I have come to realize that I have an affinity for bands that have a name referencing animals. Is this a coincidence? Perhaps. I’ve been trying to figure out what else they all have in common, but alas, they are all excellent in their own right. I would like to share some recent artists I have come across with this theme and hopefully you can decide for yourself if they truly resonate unique styles of animalistic music.

A friend of mine once asked me if I wanted to listen to a band that identified with the genre of “voodoo.” I hesitated before saying yes, but I’m glad I did. While it does not necessarily chant in voodoo, they are from a small village of Gothenburg in Sweden with a history of voodoo worship.

Goat is the premier experimental band right now. They are a wonderful mix of afrobeat, worldbeat, and hard rock. I first listened to their album “World Music” and immediately fell in love with their eclectic instruments and beats, along with their primal vocals. It really feels as if you are in the middle of a jungle while warping through time and improvising on African drums. Their newest album, “Commune” is no exception and continues their unique animal-like tradition.

I have not explored the ska genre as much as I would have liked, but perhaps the discovery of Hepcat will change that. The term “Hepcat” once referred to the jazz of the beatnik era in the 40s and 50s. In fact, they were the original “hipster” culture or at least that is when the term was coined. In any case, the Hepcat I am talking about is a first wave ska band from the early ‘90s. As a ska band, there is heavy use of brass instruments accompanied with a funky beat and rather than the usual punk-like vocals of later ska bands, Hepcat resonates much more reggae mixed with bebop and jazz. Their modern interpretation of a classic style is refreshing and worth a listen – specifically their “Right On Time.”

Deerhunter has been around for a while but I would like to take this moment to reiterate how fantastic Bradford Cox is as a musician. As the lead singer of the band, he has transformed the group into a continuous artistic experiment and project. The band has been through several line-up changes and even the death of a member, but they still maintain their “ambient noise” persona with creativity abound. Their latest album, Monomania, was critically acclaimed and has a slight punk twist on it, but nevertheless personifies the band and Bradford Cox’s vision of their own sound. For other raw and equally beautiful pieces, other projects like Atlas Sound and Black Lips provide a similar vibe.