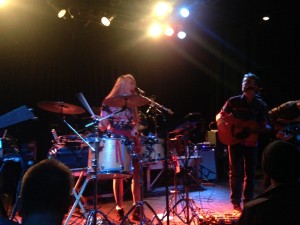 There was a palpable curiosity concerning GIVERS’ new material at the Exit/In this past Tuesday, October 21st . GIVERS have not released anything since their exuberant debut album, In Light, came on the scene in 2011. After years of waiting, concert-goers were finally treated with what GIVERS have been tinkering away on these past few years.

Seeing GIVERS take the stage was like meeting your innocent little cousin after a few years, and realizing he is not the same chubby elementary school kid anymore. They took the stage illuminated by a grungy red light to the soundtrack of a pulsing electronic beat, ditching the jaunty afro-beat that was so characteristic of their earlier work. The intro did break into a more familiar GIVERS feel, but the overall texture of the song signaled a step in a different direction from In Light.

The upbeat energy of In Light polarized listeners: for some the album was the perfect pick-me-up and for others it was like an uncomfortable sugar-rush. However, based on the rising popularity of the album it would be safe to assume most people fall into the former camp than then latter. Judging from the new GIVERS songs, this specific division among listeners will not carry over into the next album–which frontman Taylor Guarisco hinted will be dropped sometime next year. Instead of cheery duets and jaunty drumming, there was a greater emphasis on synth beats and sections with ambient vocals backing instrumental grooves. A helpful analogy may be the change in Arcade Fire from 2004’s hit “Wake Up” to the overall vibe of 2013’s Reflektor. The strongest Reflector vibes came from interludes between actual songs, so whether this analogy will hold true for the actual album and not just this performance remains to to be seen. The closing song, and one clearly destined for the next album, entitled “Record High, Record Low” did not have the ambient moodiness of some of GIVERS’ other tracks and transitions between songs (aka it was a lot less Reflektor-y). The sing-along chorus (“Record High! / Record Low!”) and the powerhouse vocals of Tiffany Lamson will be something to look out for in the future. 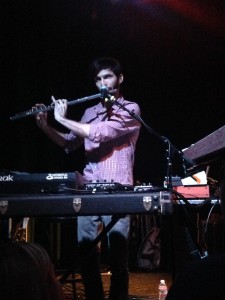 GIVERS dusted off a few songs from In Light, including “In Light”, “Atlantic”, “Ceiling of Plankton”, and their encore “Up Up Up”. Some songs, such as “Ceiling of Plankton” and “Up Up Up”, have been around since the release of their eponymous EP in 2009. While GIVERS performed those songs, audience members mouthed lyrics in every corner of the room.

Overall it was an interesting concert for fans both old and new. GIVERS just started their current tour and have not officially released any music yet, so the new works will probably develop and grow as time goes on. But based on the little taste I got Tuesday night, it seems highly likely that we will get something very different from In Light.