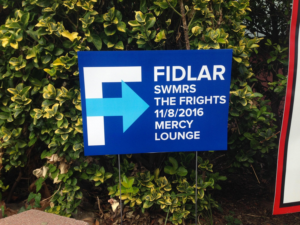 Also, there was a lot of sweat.

So the show started off pretty normally.  The Frights, an up-and-coming garage punk band who sound way better live than they do on their recorded albums, an interesting paradigm shift from the usual “this band sucks live” concept, put on a surprisingly awesome show.  The crowd was appropriately wild (swaying, jumping, and aggressively squashing people to get to the barricade), the band members were cute, the atmosphere was charged, and the number of white-girl wasted 20-year olds in crop tops was about equivalent to the amount of hairy, sweaty, 30-year old guys who like to spill their beer on people.  Overall, their set was dope, their merch was high quality and unique, and I will definitely be buying their music from now on.

As soon as The Frights’ set ended, everyone pulled out their phones to check on how the election was proceeding.  Hillary 109, Trump 150.  Nobody was happy.  The crowd began to chant “ANARCHY” repeatedly, and some dude in a Bernie Sanders shirt started crowd surfing even though there was no music playing.  Yikes. 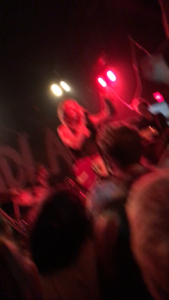 (above: an excellent photograph of SWMRS taken by yours truly)

So when SMWRS came onstage, everyone went wild.  The pit got absolutely insane, I got kicked in the face by two crowd surfers, and the lead singer cut off a song to start chanting “F— DONALD TRUMP!”  It was one of the most hype shows I’ve ever been to.  Even though I couldn’t understand any of their lyrics and I found their instrumental skills to be a little disastrous, I wanted the set to go on for another hour after it finished because it was so fun. 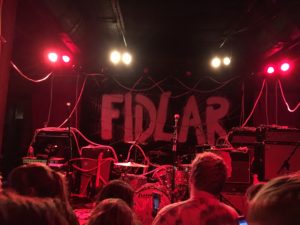 Once it was time for FIDLAR’s set, most of the drunk girls left and an influx of large, sweaty guys began to populate the barricade.  I love a crazy pit, so it was fine by me, although the bruises all over my body tell a different story.  Crowd surfing got to be a little excessive; there would be, say, 7 people surfing at once — and Mercy Lounge is a small venue.  People were falling all over the place and literally sliding around the sweat-covered the floor. I lost both my shoes towards the end of the show, guys kept ripping their shirts off, and some poor girl almost broke her arm while reaching for the setlist because a stage-diver fell on her.  Slightly dangerous yet adrenaline-inducing circumstances aside, FIDLAR’s setlist was fantastic, even though they neglected to play “Awkward,” one of their classics and my personal favorite.  They were intense as heck and so energetic, I can’t wait to see them live again hopefully at some point soon.

This was definitely one of the best shows of my life.  I’m not even mad about my cracked rib.