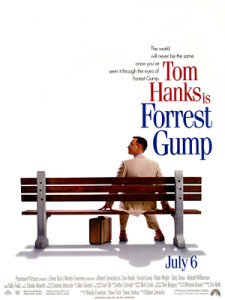 Many of us associate movies with their leading stars, dramatic plot lines, or box office success. However, one area that is often overlooked is a movie’s soundtrack. Mostly drawing from music of the 60s and 70s, but also more recent tracks, several movies have created new meaning for songs that have become crucial to pop culture.

1. Forrest Gump
As if Forrest Gump did not already have the intriguing plotline that made it an instant classic, the soundtrack of the movie draws on the best of the evolution of rock from the 60s to 80s. His childhood story begins with an encounter with Elvis, followed by his experience with the hippies of the Vietnam War, and the rise of the AIDS epidemic. The best of the few decades was showcased through meetings with presidents, rallies, and several adventures. One scene that sticks out to me is where Jenny hits a low point in her life and “Free Bird” syncs up perfectly with her actions.

2. The Graduate
Otherwise known as “that movie with a lot of Simon & Garfunkel.” More likely than not you know the song Mrs. Robinson and this movie has the actual girl they were talking about. In this classic comedy, Simon & Garfunkel are creatively weaved throughout the movie and make up essentially the entire soundtrack. To give you a good idea of the theme the music sets, a montage/trailer is below, which features “Scarborough Fair,” “Sound of Silence,” and “Mrs. Robinson.”

3. Trainspotting
Set in Scotland with several junkies in their twenties trying to make it by with their drug addiction and daily struggles, this movie is quite different from all the others in this list. There is little use of classic rock, but rather new wave and electronic music to match the scenes of clubs and night time debauchery the men take part in. One of my favorite songs of the whole movie comes from the use of “Born Slippy” by Underworld. Below is a good set of scenes that have the song overlaid.
– Underworld’s Born Slippy

4. Goodfellas
I like to think of Goodfellas as a less dramatic, easier to follow version of the Godfather. And of course, they use a killer soundtrack in addition to the phenomenal acting and plot, which is actually derived from the actual history of the Henry Hill crime family. Whenever I watch the movie (it’s probably in the double digits now), I anticipate the scene where the instrumental portion of “Layla” plays through a montage of crimes that the gangsters have committed. Take a look for yourself.

5. Wayne’s World
The rock parody to rule all parodies. Anyone who is a fan of classic rock, music, or wants a good laugh must watch Wayne’s World. Wayne and his friend Garth mimic mannerisms of famous musicians, appear as wanna-be rock stars, and even feature a parody of a scene from The Graduate. There is one scene in particular that I have strived to imitate when I’m in a full car and that is belting out to Bohemian Rhapsody. The video below is a good representation of how it usually pans out, or so I want to believe I can match at least a quarter of the awesomeness that the scene contains.