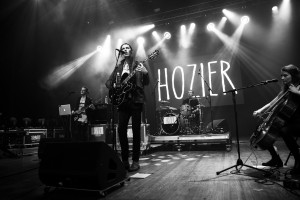 This past week, Hozier literally took thousands of fans to the Mother Church of Country Music, also known as Nashville’s Ryman Auditorium. I was lucky enough to attend one of his three sold out shows at the Ryman, and as I’m sure anyone else who was in attendance will agree, it was an incredible show. After a great set by opening act George Ezra, Hozier opened with a few of his more upbeat songs – “Angel of Small Death and the Codeine Scene,” “From Eden,” and “Jackie and Wilson.” Each of these songs generated an even stronger and louder reaction from the audience. His next song, “Someone New,” received even more excitement than the songs preceding it, likely because of its recently released music video featuring Natalie Dormer from Game of Thrones (the video, released in early March, already has over 4 million views).

Every song Hozier performed sounded just as good, or in most cases even better than it does on the album. His voice is the type that can’t be fully captured in a recording studio – it really needs a venue with acoustics like the Ryman in order to shine. If I had to pick one song that stood out, it would definitely be “In a Week.” Taking the place of Karen Cowley (the original female vocalist on this duet), was Hozier’s cellist and Irish singer-songwriter Alana Henderson. Hearing this song live added a more emotional touch that can’t be heard on the album, and it was clear the entire audience could feel it – aside from the singers’ voices, the room was so quite you could hear a pin drop.

The silence in the room for “In a Week” contrasted greatly with the response when Hozier sang his hit “Take Me to Church.” The audience was singing alone so loud it was almost impossible to hear Hozier himself singing this last song of his official set. Luckily, he came back for an encore set that almost overpowered the rest of the show. He returned to the stage solo to perform “Cherry Wine,” a song he recorded live on the roof of an abandoned mansion in his home country of Ireland. This song once again captivated the entire room, as Hozier himself even commented that it was the quietest he had ever heard an audience be during a song. He then switched gears to perform a cover of Ariana Grande’s song “Problem” – an odd song choice that somehow worked.

Hozier closed out his show with “Work Song,” to the relief of the dozens of fans that had been yelling out requests for it all evening. He really couldn’t have picked a more perfect song to sum up all of his performance – the song is sort of a middle ground between his more upbeat blues-rock driven songs and his softer ballads. Whether you are looking for a rock show or a relaxing night of folk music, Hozier can deliver. If you ever have the chance to attend one of his shows, I highly recommend it – you certainly won’t regret it.