Kendrick Lamar’s To Pimp a Butterfly is a confrontational affair, and the initial response from the general public reflected that. As one of the most commercially successful and critically lauded rappers of the 21st century, looking to follow up 2012’s classic-in-its-own-right Good Kid M.A.A.D City, Kendrick Lamar bravely ensured that To Pimp a Butterfly was too dense to take in with just a listen or two. Infinite tweets, reviews, and “thinkpieces” have attempted to pick this piece of art to the bone, but not a single one will do this labyrinth of cultural and personal meditation justice.

On the front end of the record, the instrumentals embrace the free-jazz and alien electro-funk style popularized by Flying Lotus. The first few idea-stuffed tracks feature layered beats and unhinged jazz freak-outs. A vintage Snoop Dogg verse at the end of “Institutionalized” and the appealing G-funk on “Wesley’s Theory” and “King Kunta” mask the self-hatred, frustration, and confusion in Kendrick Lamar’s lyrics. Shortly after comes album highlight “u”, which serves as the album’s emotional boiling point. The second half of the track exemplifies Kendrick’s vocal versatility, as his voice warbles and cracks incessantly, highlighting how vulnerable he feels revealing his fears and insecurities. Although listening to his pain can be hard at times, the feeling of catharsis is strong when he comes to hopeful conclusions. On the track “Alright” he assures himself and his downtrodden listeners that “We gon’ be alright.” Kendrick exhibits a wide array of chaotic emotions track after track, and in the process creates one of the most talented, passionate hip hop releases I’ve heard.

To Pimp a Butterfly isn’t really about Kendrick Lamar, though, as it’s more interested in finding a unified voice for the hip hop community and young black Americans. He isn’t claiming to be that voice, instead he wants to inspire his listeners to find theirs. Ultimately the album is an honest, yet cryptic hip-hop tapestry that attacks everything that deserves it. Tracks like “The Blacker the Berry,” “i,” and “How Much a Dollar Cost” are scathing criticisms of institutional racism, deep-rooted divisions in the black community, the blind pursuit of money, hypocrisy and self-importance (including his own), and particularly American society’s misuse of black culture. “Hood Politics” is a prime example of socially-conscious Kendrick. Kendrick addresses hip hop fans complaining that true hip hop seems to be a thing of the past by bringing up under-appreciated rapper Killer Mike. Kendrick aptly claims that if hip hop fans really respected old school, socially-conscious lyricism and wordplay, someone like Killer Mike would sell a lot more records. Instead, a more thoughtful approach to hip hop seems to so often fall on deaf ears amongst music consumers.

Despite numerous criticisms and protests against society and the music industry, the album ultimately believes music can create societal and racial progress in America. Kendrick drops truths at an alarming rate, and he always encourages the downtrodden to keep pushing against their oppressors. At the end of the album, Kendrick has a fictitious conversation with his childhood hero 2pac, who insightfully addresses many of the issues still facing Kendrick, hip hop, and black America in 2015. After explaining to his idol what he’s trying to do to help, Kendrick asks for an opinion. All he gets is silence: Kendrick’s unanswered cry of “Pac!” echoes as the album/journey comes to a close. Kendrick sees the new battleground he has to enter, and that he must enter it alone. 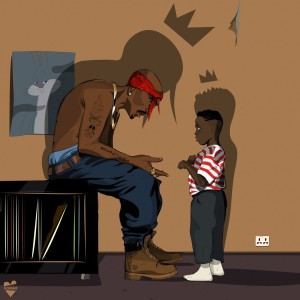 As Kendrick Lamar’s bold personal story, Good Kid M.A.A.D City convinced a lot of people that his hip hop voice matters. With that hard-earned platform, To Pimp a Butterfly paints a vivid picture of what it means and takes to be black and successful in America. It’s an album nearly as complex and layered as the experiences that inspired it. The restrictive language of musical criticism next to an album with To Pimp a Butterfly‘s density and scope feels as hopeless as changing the racial landscape of America through an op-ed. I know that this album was not made with me, a white male, in mind, so I know that my words fall short in describing the album’s importance. What I do know is that Lamar conveys his message with such depth and force so as to start important conversations and, hopefully, to make a real difference. Judging by the eager initial response (the album has already earned around $1 million on Spotify alone), America is willing to listen.

To Pimp a Butterfly is out now via Top Dawg Entertainment.