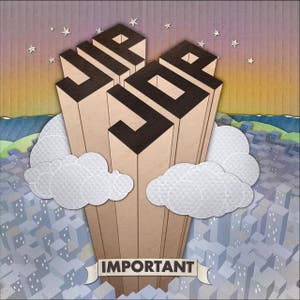 Jip Jop formed sometime between 2006 and 2008 (depending on which online bio you trust) when front man Ben Gershman- Benny Nice behind the boards and on the mic- noticed a few standout students in Indiana University Bloomington’s Jacobs school of music. They each had jazz training, they all liked hip-hop and so naturally they melded the two. The band gained notoriety for their energetic live performances while playing in clubs around Chicago. They’ve opened for some major acts like Wale, Bone Thugs-n-Harmony, Musiq SoulChild and Nappy Roots.

More recently Jip Jop has been harder to find. They announced a 2012 release date for their second album and even dropped a single but the album is still yet to release. Jip Jop also announced a Kanye West cover project in the works that- to my knowledge- also never came to fruition. Their website is no longer active, their facebook page hasn’t been updated since 2012 and their twitter page looks like this. I think it’s safe to say the band is no longer active and probably has been abducted by aliens.

Fortunately for us Earth dwellers, Jip Jop did release a single album in the summer of 2010- Important. While it’s all original material, anyone familiar with Benny Nice recognized most of the tracks as live instrumented versions of his earlier mixtape material which is cool because Benny is dope. (as an aside, Benny Nice is crazy prolific; he’s released a total of 16 instrumental tapes and mixtapes since 2006 along with releasing Important, touring with Jip Jop and supposedly recording new album and mixtape material. It’s a shame the aliens got him).

Jip Jop takes the idea of a hip-hop band, gets jazzy with it a la early Roots and then sprinkles some pop on the top. The live drumming and crisp horns really set the atmosphere for this album. Mix all that with the occasional piano and trumpet solo and you have a good time. And really, that’s what the instrumentation is about on this album. Taking a damn good time and putting that in your ear canals.

Benny flows on each track with a stream of conscious style that leads to some unorthodox rhymes and- at times- surprisingly introspective lyrics. B-Nice takes a collage sort of approach with his message, taking seemingly disparate topics and images and then combining them to comment on something larger. Peep the section below for examples.

My theory is that it’s Kids these Days fault. The band made up of high school kids was gaining massive traction in the city years before and in the years after Important dropped (their Hard Times EP was released in 2011, a year after Important). Chicagoans felt a stronger connection to Kids These Days because- if you didn’t know one of them yourself- everyone had a friend who was friends with the band. The town was only big enough for one hip-hop band and listeners chose the group that was made up of its peers.

That and Jip Jop was abducted by aliens.

Amelia Airhart: Benny Nice uses Amelia Earhart’s story as an allegory for the search for love. Really, those opening lines have me “I want forever to flow, like a Lilly pad buoyant/ Quest for the love and those who vowed to destroy it”.

Access: This is the closest Benny gets to braggadocio on this album and boy, oh boy is it fun, “Its like I’ve accessed the core of the main frame/ Its like I’ve captured the beast that remains tame/ You could not feed me like a feast or put me on a leash/ Because my logic never cease, I think sane”.

Pluto’s Still a Planet to Me: Benny’s pulling heartstrings on this one, pulling out the personal struggle we all face in trying to be the protagonist in our own personal story. He also uses the title little tribute to Chicago (Illinois still recognizes Pluto as a planet). So that’s cool too.