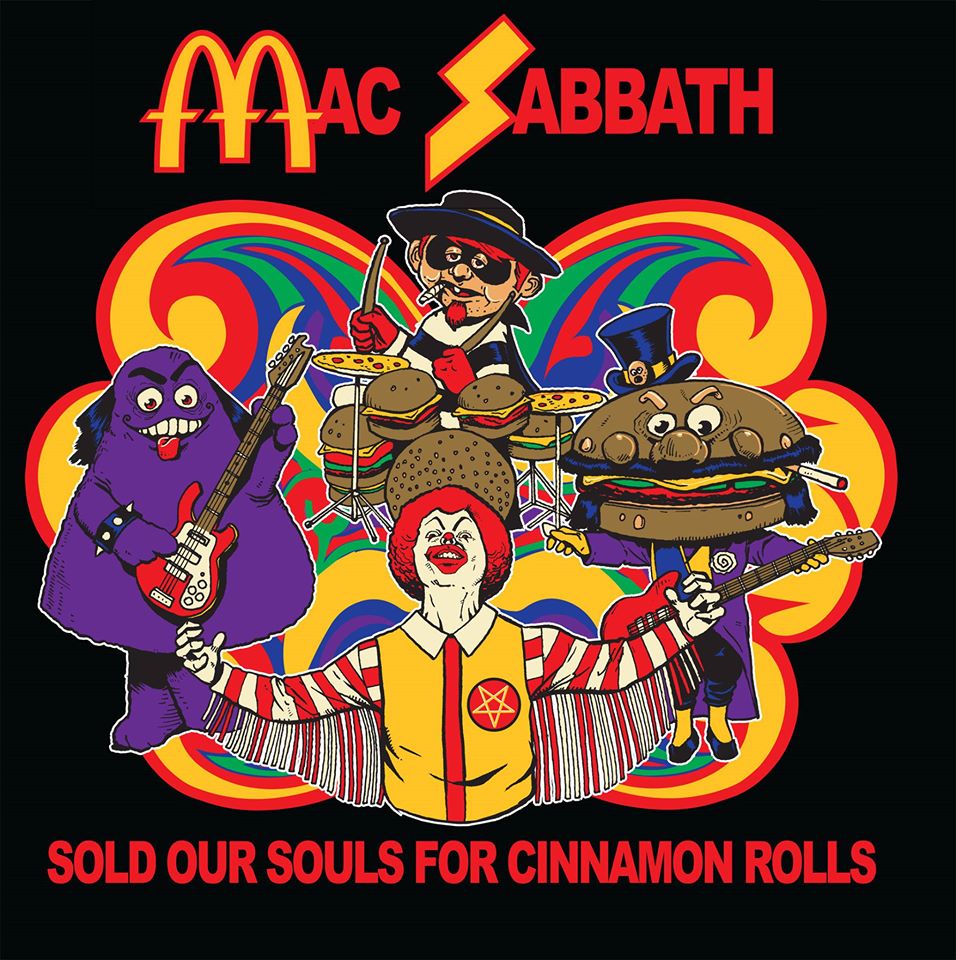 Before I even start reviewing Mac Sabbath’s appearance at Exit/In, let me just say this – there are some things that you can’t just make up.  This entire show was one of those things.  For those not familiar with Mac Sabbath, the parody metal band was formed in 2014 in Los Angeles by people whom I can only imagine are really interesting underneath their costumes.  Formed as a way to protest a certain fast food chain (and fast food in general), the band takes Black Sabbath songs and changes the lyrics to center around this certain chain’s food and imagery.  According to the band, they are from a “delicate part of the space time continuum,” and the group consists of Ronald Osbourne (vocals), Slayer McCheeze (guitar), Grimalice (bass), and the Catburglar (drums).  Again, I just can’t make this stuff up.

The band gained popularity in 2014 when a video of them playing “Frying Pan” (their take on “Iron Man”) went viral with even Black Sabbath sharing the video on their Facebook page.  Needless to say, I’ve been waiting since 2014 for the opportunity to see the band in action.  To be honest, I had absolutely no idea how the show was going to be.  A few friends of mine who ended up not going even said that they thought that the show would be funny for about one song and then it would get old really quickly.  What I found was that that statement couldn’t have been more false; Mac Sabbath is a phenomenal Black Sabbath cover band who put on an entertaining and head-banging show for an hour and a half.  Loaded with comical gimmicks and imagery, I was enthralled during the entire show. 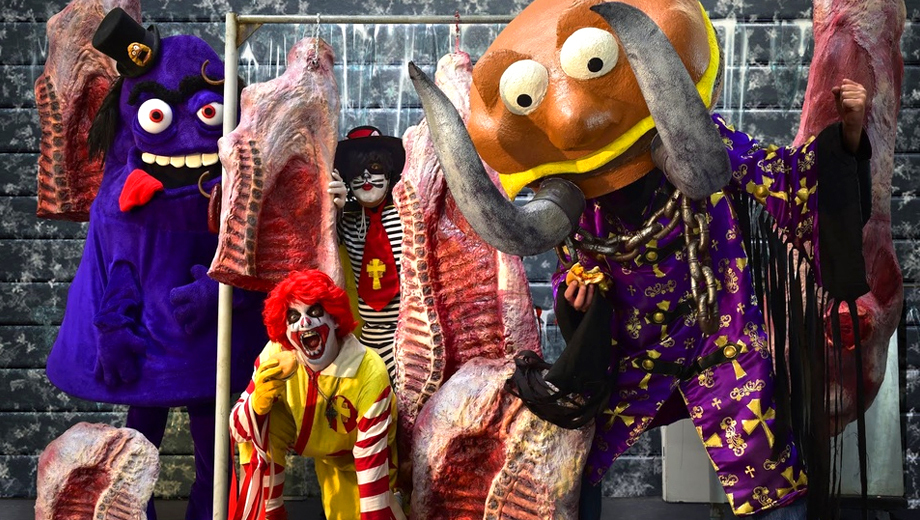 The show started out with a stage covered in a red and yellow wall of cloth with two menacing Ronald McDonald heads shooting lasers out of their eyes and blowing smoke onto the crowd while “Bring in the Clowns” played softly.  As the music faded, a clown’s menacing cackle came through the speakers before transitioning into an air raid siren at which point the cloth dropped and the band started to play “More Ribs” (War Pigs).  It was at this moment that I knew I was going to get my money out of this show.  You could just tell that this band was no joke (although everything else except the music seemed to suggest otherwise).  They were rehearsed, very well.  Before starting their second song, “Chicken for the Slaves” (Children of the Grave), Ronald Osbourne held chicken McNuggets towards the crowd and basically went on a tirade about fast food in a comical way.  Sticking to a Ozzy impression the entire show (basically babbling a lot in a British accent), Ronald Osbourne made food puns and ranted between most of the songs.  It was great.

“More Ribs,” “Chicken for the Slaves,” “Sweet Beef,” “N.I.B.B.L.E.,” and “Cherries are Fruits” were the definite highlights of the show.  Most of the songs had some assortment of props used during the show.  In a way, that’s almost what sold the show for me and maybe most of the crowd.  Besides being a great, well-rehearsed band (which they really 100% are), it was the little things that really made the show the unique experience it was.  From the two ten-foot, evil-looking clowns standing behind the drum kit to the ketchup and mustard bottles used for water, this show really was the full package.  At one point, Ronald Osbourne unzipped his uniform and pulled a ten-foot McDonald’s straw out, then proceeded to chug someone’s PBR through the straw.  All of this happened during Slayer McCheeze’s guitar solo in “Lord of the Swirl.”  Like I said, I can’t just make this stuff up. 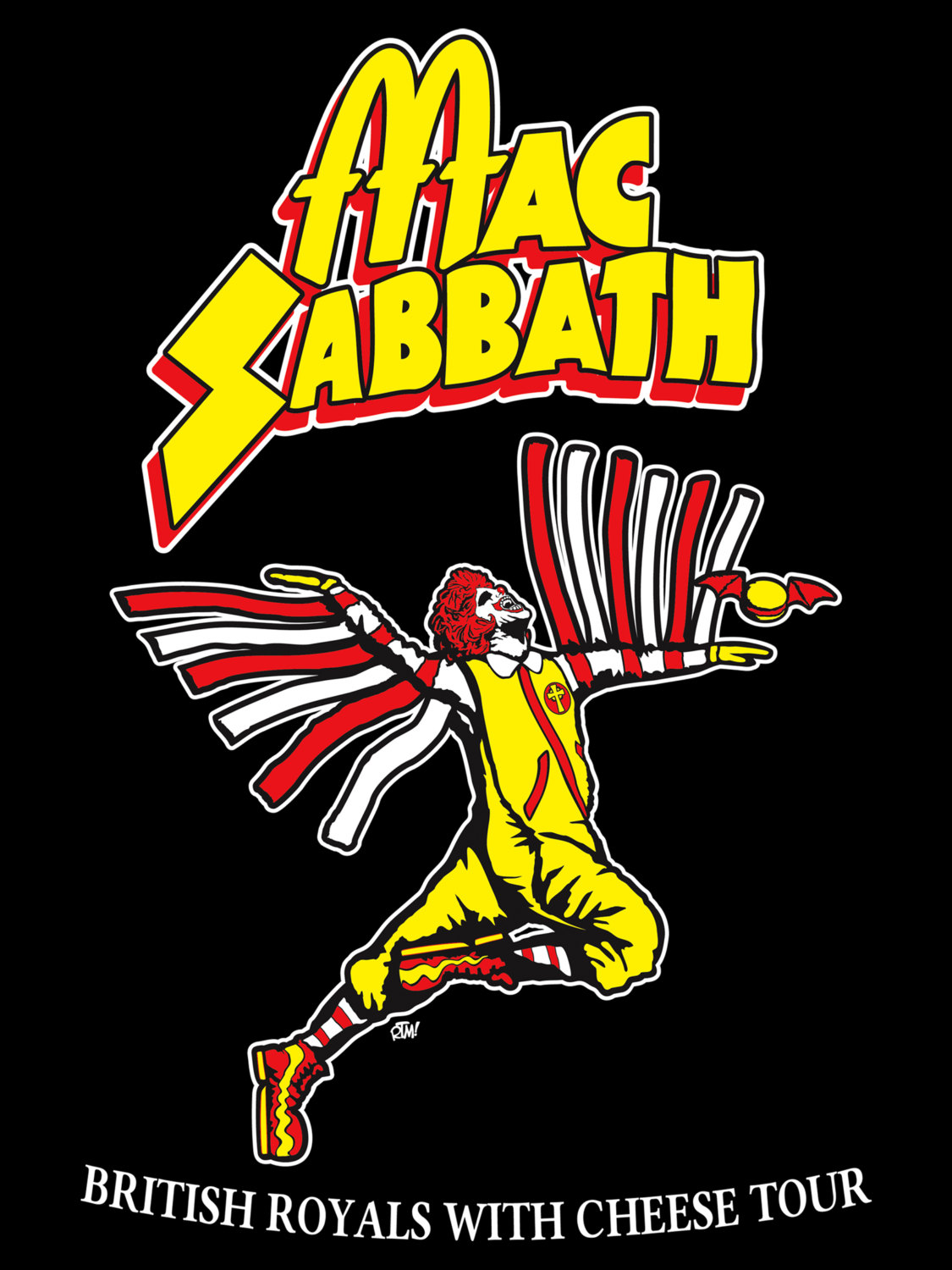 Actual t-shirt design (which I now own), via etsy.com

During “Frying Pan,” Ronald Osbourne spent Slayer’s guitar solo making a cheeseburger with bat wings.  He then proceeded to take a large bit out of the burger and laugh hysterically before finishing out the song.  God, I loved this show.  Finally, the band played an encore, “Pair-a-Buns” (Paranoid), while a huge mosh pit formed and Ronald Osbourne crowd-surfed – a fantastic ending to a fantastic show.

As I said before, this band was a serious band.  Maybe not serious in terms of writing their own material or becoming the next big indie group, but they clearly rehearsed just as hard as a typical touring band.  Overall, they were a great cover band, but it was the little things that really sold the show as a whole.  If you have a chance to see this band and are a fan of Black Sabbath, I highly recommend it as it was truly one-of-a-kind.