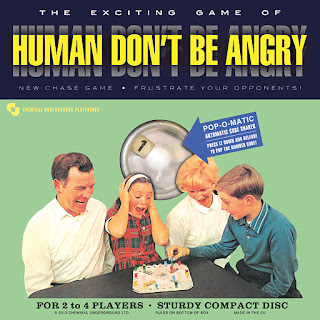 Malcolm Middleton, a musician from Falkirk, Scotland, was once part of the duo Arab Strap before embarking on a solo career and releasing five albums in the span of seven years. However, seeking yet another creative outlet, Middleton decided to take on the pseudonym of Human Don’t Be Angry, a translation of the German board game “Mensch ärgere Dich nicht”, releasing his first self-titled album in 2012. This new solo project is a completely new departure from his previous heartachey lyrics and mellow indie rock sounds; Human Don’t Be Angry is a largely electronic instrumental album.

Although only four tracks of the nine feature any real lyrics, the other five tracks are not any less rich or exciting; in fact, the instrumental tracks are the ones that truly demand the listener’s attention. The styles in Human Don’t Be Angry range from the chill head-nodding The Missing Plutonium to the overly delicate After the Pleasuredome to the repetitive, harmonious 1985. Only Monologue: River really holds any resemblance to Middleton’s previous indie rock sounds. Despite the wide range of styles and instruments heard throughout the album, there is a cohesiveness brought to surface perhaps by the non-exhaustive circularity and repetitiveness in each track (First Person Singular, Present Tense is the best example). Middleton’s sounds were once mediocre at best, but with the fresh sounds of Human Don’t Be Angry, he is clearly excelling on the electronica front.

Your ears are missing out if they haven’t heard Human Don’t Be Angry, so give a listen to a few of my favourite tracks from this album:

–The Missing Plutonium: A terrific opener with a more synth-y feel and a fantastic melody
–1985: Sounds like a bunch of sounds are just being played on loop over and over again and it’s amazing (the best track on the album in my opinion). The music video also features the German boardgame which Human Don’t Be Angry is named after so you should click the link and watch it.
–Asklipiio: A slower, less upbeat track than the rest, but one of the few where we get to hear Middleton’s ambient voice