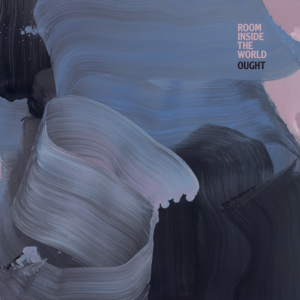 Ought’s Room Inside the World, from Merge Records

On their third full-length LP, the Montreal post-punk revivalists have produced their most nuanced and melodically inclined album to date.

Room Inside the World, to be released February 16th on Merge Records, comes to us after a three-year period of relative inactivity from Ought. If you aren’t familiar with the band, Ought is a Montreal-based post-punk group that has been releasing wordy, angular music since 2011. Their first full-length from 2014, More Than Any Other Day, was a scattered, schizophrenic, triumphant album that drew from influences in traditional post-punk, folk rock, emo, and post-rock. The following year, Ought released Sun Coming Down, which saw the band take a more dissonant and aggressive tone than their first album. However, on both releases, vocalist and frontman Tim Darcy’s lyrics and delivery stand out. They are near-perfect observations of the anxieties of life in the information age that remain witty and humorous even in their cynicism.

When Ought announced they’d be releasing a new album in 2018, fans and critics alike puzzled at what the next iteration of Canadian art-punk would sound like. Well, it’s melodic. It’s dreamy. It’s abstract. It’s antsy, and it is beautiful. The band have shed much of the angular, distorted guitar work that previously punctuated Darcy’s verbose and heady lyrics in favor of more diverse instrumentation. From the first lush piano chords on the opening track “Into the Sea,” it is clear that Room Inside the World is a musical left turn for Ought. The song later introduces skittering, nervous drums and melodic, reverb-drenched guitars, which make the track sound distinctly Ought despite its pop leanings.

The second of three singles released in advance of the album, “Disgraced in America,” is a good representation of what this record has to offer. The catchy and clean guitar riff over rich but understated synths immediately draws the listener in, while Darcy begins to moan his scathing critique of American/consumer culture in true David Byrne style. This trend would continue throughout the album: diverse and interesting instrumentation (including a vocal choir on the towering ballad “Desire,”  incredibly catchy hooks, and compelling lyricism.

While I can’t go into each individual track (much as I’d like to), suffice to say Room Inside the World is music for the city. It’s music that captures the jitters, the anxieties, the excitement, and the lively atmosphere of today’s urban life. Even when Darcy seems to dip into near-depression as on the song “Disaffectation”:

“These city streets keep me boxed up and alone,

Well here’s some medication, you can get it through the phone

Disaffectation is holy, it makes me feel alive”

He always finds a hopeful message buried somewhere in the pile of pessimism that pervades our daily lives:

“I feel my feet in the fire

I feel the fire in my head

It lifts me higher and higher

It takes me far away from here

It takes me far away from here”

When I listen to this album, it feels as if I’m walking on a rainy day, until, suddenly, a ray of light bursts through the clouds and dispels the storm. I urge you to give Room Inside the World a listen when it releases next Friday; it’s an incredibly consistent, interesting, and beautifully arranged record.