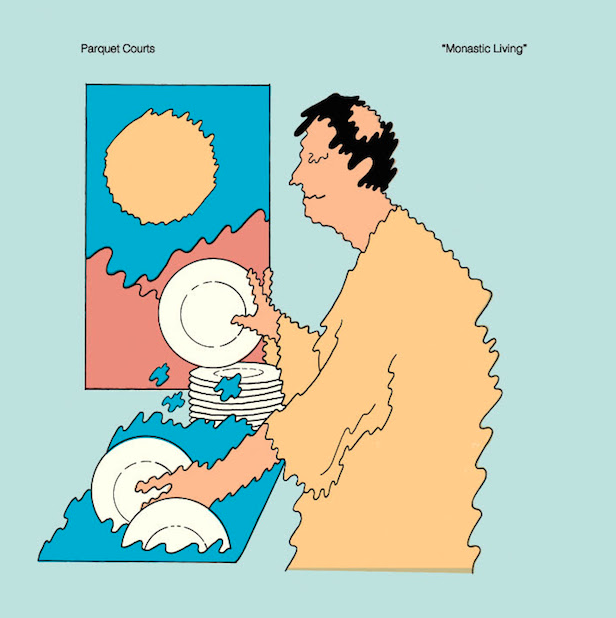 There is a possibility that Monastic Living won’t make you angry, of course, but I’m willing to bet to the contrary. Angry, hurt, or—at the very least—a little cheated.

“No, No, No!” acts as a one-minute introduction to Monastic Living, a raw—if forgettable—one. What comes next is “Monastic Living I.” It’s catchy at first, but after nearly two minutes, it gets, honestly, a little grating. This leads into a rough series of disjointed tunes. The track is somewhat like what you’d imagine Parquet Courts would sound like warming up before a show, for better or worse (probably the latter). The following track, “Elegy of Colonial Suffering,” is even more difficult to get through; it sounds kind of like what happened when your CD skipped to no end in days of yore.

“Frog Pond Plop” was the point where I considered that the album was either a representation of my “not getting” music—I pictured Parquet Courts laughing at me and my fellow confused listeners from the inaccessible realm of the High Brow—or, perhaps, that this album was satirical. (“Frog Pond Plop” is essentially just a single tone of noise.) Which, in the world of experimental art may have a meaning—or meaning via its lack thereof—and yet, if that’s the case, it was all but lost on me, and seemed incongruent with the group’s persona. If the band was trying to (har har har) create an album void of musical depth and intricacy to demonstrate the austerity of Monastic Living, then sure, jokes on us.

We get a glimpse of hope at “Alms for the Poor.” Though the transition-like song is only 45 seconds long, it is not only uniquely listenable but also the kind of head-bobbing rock you’re used to from the band.

The EP as a whole is cohesive—though that doesn’t really mean much at the cost of quality. Though many fans of Parquet Courts will likely be disappointed by the release, it is at the very least usable as solid angry background music to vent about it.