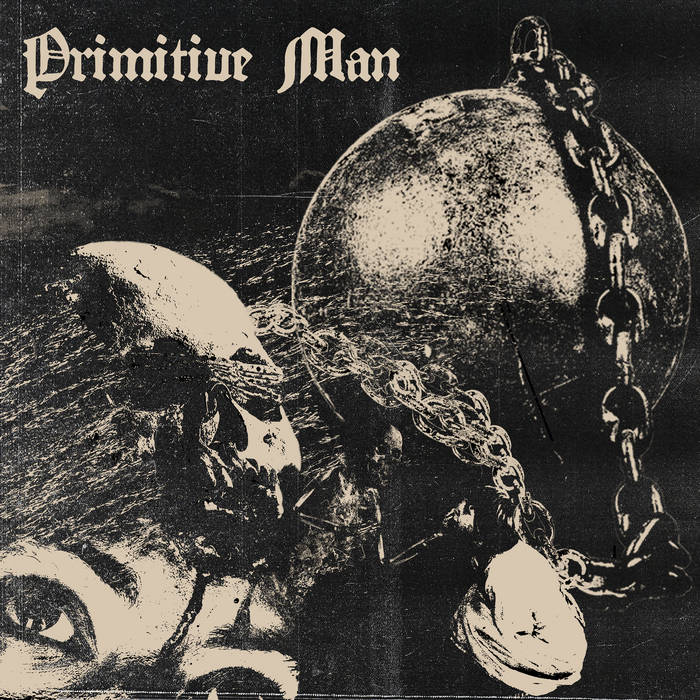 Primitive Man is a band that’s always specialized in creating dense, incredibly harsh textures. 2013’s Scorn, the band’s debut full length, is about as sonically oppressive and ugly of an album as you’re likely to find in modern metal, and it introduced the heavy music world to Primitive Man’s unique blend of noise, sludge, death metal, and blackened doom. But believe it or not, Primitive Man just came through with an even uglier and more oppressive release with Caustic.

Even at first glance, Caustic manages to be more imposing than Scorn. Whereas the latter already felt like a grinding eternity at roughly forty minutes long and seven tracks, Caustic stretches for a truly monolithic seventy-seven minutes and twelve tracks (three of which are just minute-long interludes). Four of the tracks here closely approach or surpass the ten-minute mark, and there are very, very few breaks from Primitive Man’s all-out aural onslaught for the duration of the album. You might ask, “So why listen to it then?” And the answer is that it’s almost just too damn well done not to listen.

With an album this long and unrelenting, the worry is always there that the shock will wear off – that it’ll get old somehow. Primitive Man deftly avoids this. These songs feel truly massive, and barely a second is wasted on any of them. They effortlessly weave in, out, and through a dense stylistic playbook, creating compelling and uniquely punishing textures at every step.

Even when they indulge in long, uninterrupted passages of churning chords and bloodcurdling noise, the band sidesteps monotony by putting an immense amount of care into their craft, placing seemingly endless layers of feedback squalls and hideous guitars carefully together into a dense, metallic tapestry that seems to reward repeat listens almost endlessly. The level of brutality is readily apparent in the sound itself, but there is also an astounding amount of attention paid to making sure every moment of this album is surprising and truly hellish in its own way, and that’s what really sets this album apart from the crop of harsh, blackened, noise-crusted metal albums.

Opener “My Will” starts off on an almost impossibly heavy, putrid note. There’s this immediate wall of ridiculously harsh distortion and a grinding, ruthless tempo, but also immediately apparent is vocalist Ethan Lee McCarthy’s range. Often within the space of a song, as he does within the first minutes of “My Will,” McCarthy traverses the tainted depths of his vocal cords to produce anything from a guttural, ridiculously threatening death growl to a somewhat sludgier mid-range howl, even sometimes reaching up to emit a twisted facsimile of a black metal retch.

The variety is not confined to McCarthy’s virtuosic vocal performances on Caustic, though. More than perhaps ever before, Primitive Man shows a massive instrumental range in terms of emotion, tempo, and style. After a nightmarish yet driving cacophony at the onset of “Victim” (featuring one of McCarthy’s gnarliest vocals on the entire album), the band launches into a sick simulacrum of a d-beat passage before wrenching suddenly into a crawling, doom-laden slab of pure dread. The band remains at a near-standstill until a brief passage of sudden blast beats gives back in to the pummeling, grotesque crawl that came before.

Other standouts include the soul crushing sea of hate, “Commerce,” the over-aggressive onslaught of “Sterility,” and the strangely cathartic “Inevitable,” the last of which finds an unexpected note of nuanced emotion and transcendence in a somewhat uncharacteristically melodic guitar figure that’s repeated over much of the middle section.

With Caustic, Primitive Man have made a stunning and truly admirable metal album. Sure, it may be an extremely intense and difficult listening experience, but this album manages to not just be tremendously brutal and heavy. What Caustic does so well is shown in its balance of a sense of unfathomable heaviness and of meticulous craft that rewards repeat listens as much a one-time experience. This sets apart Caustic and makes it not just another incredibly dense metal release, but certainly also one of the best heavy albums of the year.