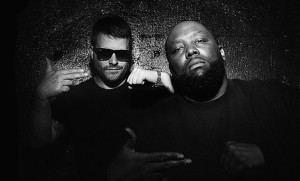 With lyrics of equal parts introspection and over-the-top vulgarity, Killer Mike and El-P have resonated with audiences with an underground-rap style that maintains a level of accessibility to an audience beyond just hip-hop fans. This mass appeal was on display last year, when a Kickstarter campaign raised $45,000 to fund this album. Starting off as a joke pre-order package by Killer Mike and El-P on the Run the Jewels website, Meow the Jewels took a life of it’s own and now is a legitimate project featuring a host of producers (Massive Attack, Boots, the Alchemist, Dan the Automator, Zola Jesus, Just Blaze, Baauer, Geoff Barrow) and a small army of cats. El-P and Killer Mike have pledged that 100% of the proceeds will go to the victims of police brutality—a kind of social consciousness that isn’t anything new for the duo.

“Oh My Darling Don’t Meow” features a variety of cat sounds including jungle cat growls, the yelps of rabies stricken alley-cats, and annoying housecats that won’t shut-up. The beat to this song does not have that throbbing, deep-space bassline of the original and it feels more stripped back. The verses are delivered with the same punch as in the real album, so other than a character named Justin getting mauled by a mob of cats in the middle of it, this song can almost pass as a serious track.

Earlier this summer, Run the Jewels released “Meowrly”, a play on “Early”.

The album was even the subject of this sketch from The Late Show with Stephen Colbert.

Finally, for those of you who were thinking about this the whole article: