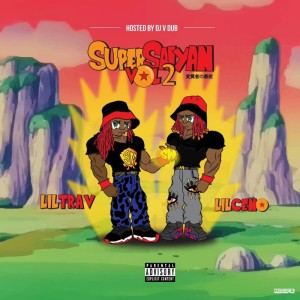 This is rap gone Technicolor, if you’re not a fan of Autotune (maybe you’re Jay-Z) you may want to look the other way. Chicago bop duo Lil Trav and Lil Ceno have another stack of elastic high-energy tracks that paint rap in a melodic bloom of colorful effects anchored by bouncy beats.

Coming off some infectious tracks, (“Remy Rick”, “Fiesta”, “Young Heavy”, and  “Round N Round”) Sicko Mobb carry on in the latest progression of Autotuned rap-singing melodic rap. Their weird, catchy sound is reminiscent of the hazed out hedonism anthems of Future and pretty boy ego trips of Soulja Boy, though while Future has been chasing around demons and inverting the melody of Autotune to soundtrack his own self-torturing abandonment, Sicko Mobb are flourishing in the elasticity of rap-singing.

Super Saiyan Vol. 2 builds upon the sounds revealed in the previous volume, rendering the sunshine pop nuggets (“Kool Aid”, “Own Lane”) all the brighter and the flows tighter (“Penny HardAway”, “Band Up” ). Lil Trav and Lil Ceno have already shown themselves more than capable of good technical rapping when they want to, they’re just usually floating too high in the melody to bother grounding themselves.

“Trending Topic” starts with a great call-out to female independence, and though Sicko Mobb make it clear that they love girls, I feel like in their heart of hearts, they’re jean enthusiasts as the references to Robin’s jeans are truly plentiful and then of course there’s this: 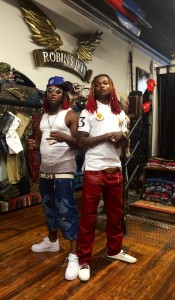 Consequently, the excellent and unreleased “Flexin in my Robbins” might just be their best song yet; a pure turn up mantra backed by a leviathan beat. They’ve already gained a foothold in their hometown but if Sicko Mobb keep tossing out tracks like this, they could go the Migos way, (sheer hit-making brilliance, again and again). The ruts in this tape feel necessary, as they set up the highlights and Sicko Mobb are only getting better. SSV2 is a glo up victory lap, taking note of Sicko Mobb’s recent ascendance while still pointing to farther heights to be reached.

With SSV2, Sicko Mobb demand attention, and then back everything up with a solid collection of fun, bouncing beats and confident rapping. If you’re looking for something to blast during the summer while mixing kool-aid, organizing your collection of Robins, or feeling a little Dragon Ball Z nostalgia, you probably can’t do much better than Sicko.