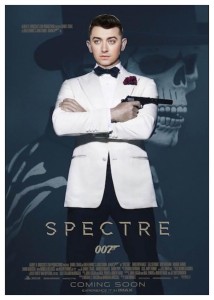 English singer-songwriter Sam Smith won Best Original Song at the 2016 Oscars on Sunday for “Writing’s on the Wall,” the theme song for Spectre. This is the second time that the theme song for a James Bond film has won an Oscar, with Adele’s “Skyfall” from Skyfall setting the precedent in 2013.

“Writing’s on the Wall” beat out the other 4 nominated songs: “Earned It” from Fifty Shades of Grey, “Manta Ray” from Racing Extinction, “Simple Song #3” from YOUTH, and “Til It Happens To You” from The Hunting Ground.  Lady Gaga gave an emotional performance of “Til It Happens To You,” and was joined on stage by 50 survivors of and advocates against sexual-based violence.

Sam Smith’s live rendition of “Writing’s on the Wall,” however, was not quite as moving. Smith reportedly told the BBC that his Oscar performance was “the worst moment of [his] life.” Apparently he’s received so much backlash for beating out Lady Gaga for the award, his lackluster performance, and for misquoting Sir Ian McKellen and incorrectly insinuating that he might be the first openly gay man to win an Oscar that he decided to quit Twitter for a while. What you can’t see can’t hurt you, right?

At the end of the day, an Oscar win is an Oscar win. Even though there has been a wide Spectre-um of James Bond theme songs, only two have won this prestigious award. If you’re interested in tossing some of the older action-packed tunes a listen, check out this playlist:

Lastly, if you’re like me and you really need some motivational music to power through midterms and lengthy papers (or you just want to feel like an M16 member whilst walking to class), check out the soundtrack to Spectre: