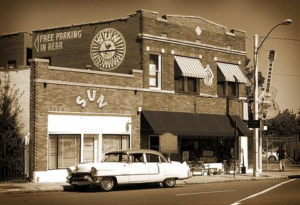 When you think of Rock ‘n Roll, you think of an American phenomenon exemplified in its prime by jukeboxes and American Bandstand and later by Woodstock and Ziggy Stardust. Yet, before it was a way of life, it was an experiment in a little studio in Memphis, Tennessee.

Sun Records was founded in 1952 by a man named Sam. He named his recording studio Sun Records because he liked the idea of a new day and the optimism that came at the start of each day. Not long after opening up shop, Sam gained a reputation for treating his musicians with respect.

At the time, Memphis was a cultural hub, hosting music scenes for almost any genre that was around, including, blues, country, hillbilly, and gospel. Sun recorded all of them, but was focused on rhythm and blues.  Sam thought that the black artists of the day had a better sound and were creating more soulful music and intended to spread black music to the masses. Artists such as BB King and James Cotton recorded at Sun but to little commercial avail. 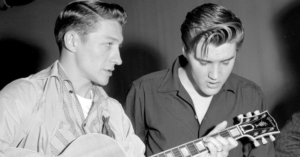 Sun Records hit it big when a young man by the name of Elvis Presley, who was looking to record a song for his mother, walked in off the street. Elvis recorded a little at Sun, but his record contact was sold to RCA at a price of $35,000 for financial reasons. Sun, however, was not in dire straits. The label later picked up some no name artists by the name of Roy Orbison, Johnny Cash, and Jerry Lee Lewis, artists who would later command the charts of Country, R&B, and Rock ‘N Roll.

One jam session at Sun Records became extremely famous, more famous than almost any other jam session that had been or would ever be recorded. A day in December 1956, Jerry Lee Lewis was playing piano for Carl Perkins during a recording session when Elvis walked in. Sam called Johnny Cash and got him into the studio so the four could play together, marking a seminal moment in the early days of rock ‘n roll. The recordings were not released until 1981.

Sam famously challenged the four artists to a contest: whichever made a gold record first would get a Cadillac. Carl Perkins won. 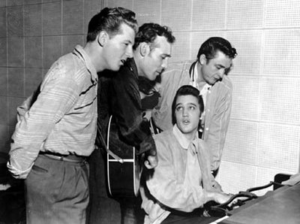 A new TV show hit the airwaves only a few weeks ago. It’s called Sun Records, it’s on CMT, and it follows Sam Phillips and his little recording studio, finally giving widespread credit where credit is due for the birth of Elvis, Johnny Cash, and rock n’ roll.