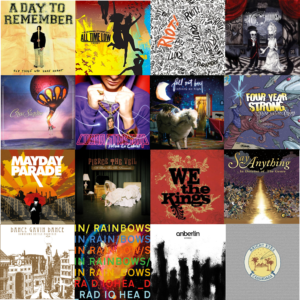 2007: a great year for heavy eyeliner, lip piercings, Myspace, and alternative music that nowadays we pretend to be embarrassed of ever liking.  Just to make everyone’s hearts feel a nostalgic pang, I’ve decided to compile a list of albums that will be turning 10 this year.

To start off with the most legendary emo group of all time (which at one point has been has definitely been your favorite band), Fall Out Boy released Infinity on High on February 6, 2007.  Here’s a fun fact that nobody cares about: Infinity on High is the first CD I ever owned.  Notable tracks include: “Thnks fr th Mmrs,” “The Carpal Tunnel of Love,” “Thriller,” “The (After) Life of the Party,” “Hum Hallelujah,” and honestly every single other song.  This album hasn’t gotten tired after ten years, and it’s doubtful it ever will.

While Fall Out Boy provided the alternative scene’s peak album of 2007, earning the title of one of the top 20 Best Selling Albums of the Year Worldwide, Bright Eyes’ Cassadaga failed miserably.  Arguably one of the worst, if not THE worst, Bright Eyes album, Cassadaga has absolutely no notable tracks, and one month into sales was headed straight into CD store oblivion.

Anyway, 2007 was still pretty great aside from the whole Bright Eyes disappointment that we should all just repress.  A Day to Remember, first launched into fame in 2005 largely thanks to their hit “You Had Me At Hello,” released For Those Who Have Heart ten years ago.  That album successfully solidified their hardcore/punk status and earned them an extensive following on the edgy/alt sides of Twitter and Tumblr.  Notable tracks include: “The Plot to Bomb the Panhandle,” “Colder Than My Heart, If You Can Imagine,” and a really sick cover of Kelly Clarkson’s “Since U Been Gone.”

A Lesson in Romantics, Mayday Parade’s best album ever (don’t even try to argue with me on this), came out in the summer of 2007 and broke millions of teenage hearts, probably.  Mayday Parade is blessing us with a tour this very Spring where they’ll be playing the full album cover to cover, and I have never been so excited in my life.  Notable tracks include: “Jamie All Over,” “Jersey,” “Miserable at Best,” and “If You Wanted a Song Written About You, All You Had to Do Was Ask.”

We the Kings’ self titled album has also just turned a decade old.  Like Mayday Parade, they are currently performing an anniversary tour for it, and it’s been a pretty huge success so far. Notable tracks include: “Check Yes Juliet,” “Skyway Avenue,” “All Again For You,” and “Stay Young.”

All Time Low’s second album, So Wrong, It’s Right, came out in June 2007, and it blew up enormously.  This album was huge for pop punk, and it will always be a jam.  Notable tracks include: “Dear Maria, Count Me In,” “Six Feet Under the Stars,” “Stay Awake,” and “Remembering Sunday.”

Other exciting 10th b-day albums include: I-Empire by Angels and Airwaves, The Way We Talk (EP) by The Maine, Bone Palace Ballet by Chiodos, Take to the Skies by Enter Shikari, Riot! by Paramore (who I despise, BTW), A Flair for the Dramatic by Pierce the Veil, In Defense of the Genre by Say Anything, Scary Kids Scaring Kids’ self titled, Underclass Hero by Sum 41, Lies for the Liars by The Used, Love the Love You Have by The Summer Set, and Even If It Kills Me by Motion City Soundtrack.