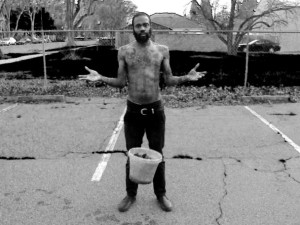 In early June, the elusive experimental hip hop group Death Grips released the first half of a double LP called The Powers That B, effectively dropping a bomb on the indie music community from up their sleeves.  Soon after, the band announced the completion of Death Grips as a project and the cancellation of all future tour dates.  Now we find ourselves in a post-Death Grips world, except one of these days we can expect Death Grips to release the second half of The Powers That B in a similarly sudden fashion.

The album begins in a way that any Death Grips fan would embrace: a harsh noise, a voice sample, and a disembodied, repetitive chant from MC Ride.  Despite this initial jolt of familiarity, the album descends into one of Death Grips’ most jumbled, disorienting, and dark releases yet.  Death Grips takes the aggressive IDM influence demonstrated on its previous LP, Government Plates and stretches it further.  Harsh and chaotic electric sounds sometimes completely overtake the verses in addition to dominating the points between Ride’s lyrics.  Not that this makes a huge difference in the interpretation of song meanings; Ride’s lyrics are cryptic, just short of indecipherable.  However, I could pick out general themes after a few intense listens: sexual fetishism and addiction, modern racial problems and insensitivity, and arrogance associated with performing arts.  It could not be said this is unexplored territory for the group, as many of these themes appear in their first couple albums, Ex Military and The Money Store. 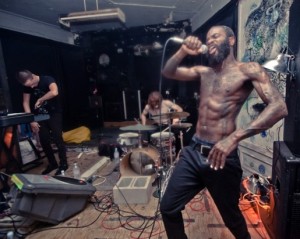 A popular debate concerning Death Grips is their status as a hip hop group.  Their label as industrial hip hop or noise hop is a settlement more than anything.  It has been a stretch to describe MC Ride’s frantic yells and brooding moans as rapping, and there is an arguably greater emphasis placed on the thick, sludgy production and noisy samples than the vocals.  There have been a fair share of comparisons to punk rock due to the aggressive, anti-establishment ethos of the group.  Despite this previous controversy, Death Grips’ classification has never been more uncertain than it is now.  Zach Hill’s drums sound more like his work in Hella than ever before, with certain beats like those contained in “Voila” and “F**k Me Out” sounding like they could have come right out of Hold Your Horse Is.  Ride’s lyrics move further and further from rapping in favor of short, distorted verses and repeated snippets of phrases that make little sense when put together in a given track.  The production is the most abrasive I have heard since NO LOVE DEEP WEB, with more of an emphasis placed on high-pitched harshness than that record’s deep, throbbing base.  In short, it is really, really tough to call this hip hop.

So what does this record mean for Death Grips?  It is important to consider this question in the context of recent events.  On July 2, less than a month after the release of n****s on the moon, Death Grips was declared over and complete on the group’s Facebook page. 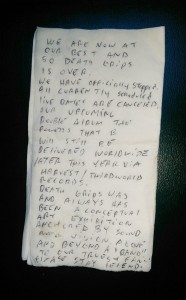 we are now at our best and so Death Grips is over. we have officially stopped. all currently scheduled live dates are canceled. our upcoming double album “the powers that b” will still be delivered worldwide later this year via Harvest/Third Worlds Records. Death Grips was and always has been a conceptual art exhibition anchored by sound and vision. above and beyond a “band”. to our truest fans, please stay legend.

If you asked most of the major music publications about their ranking of Death Grips’ discography, I doubt a single one would have n****s on the moon on top.  The consensus according to metacritic, in fact, ranks it at the very bottom.  Why do Death Grips consider themselves to be at their best?  I think this is best demonstrated in the extremity of this latest release.  Death Grips started out as grimy, industrial hip hop and have been pushing the envelope further and further with each subsequent release.  For Death Grips, “good” is subverting expectations.  “Good” is making people uncomfortable.  “Good” is not caring what anyone thinks they should do, not even their fans (demonstrated in their nonchalant cancellation of tour dates on multiple occasions).  N****s on the moon seems to be indicative of the goal of Death Grips to begin with: to arrive at something completely new and unrecognizable.  It was always about the journey to something new for Death Grips, rather than the destination.

Is Death Grips pretentious?  Probably.  If you went as far as to call them arrogant jerks I would not find myself disagreeing.  Either way, I find their pretension and callous disregard for their own fans refreshing.  In a music world dominated by record companies and the constant pressure to tour, it is nice to see a group shatter that mold and still find success and fandom.  While I was disappointed that Death Grips’ death caused the cancellation of one of their tour dates that I had planned on attending, I can’t say I was surprised.  Death Grips’ refusal to do anything they don’t want to do is exactly what made them so great in the first place.

Death Grips is in the rear view mirror for me.  I plan to listen to the second half of The Powers That B, probably enjoy it, and hope that I find other artists that push the boundaries of the music industry half as much as Death Grips has.