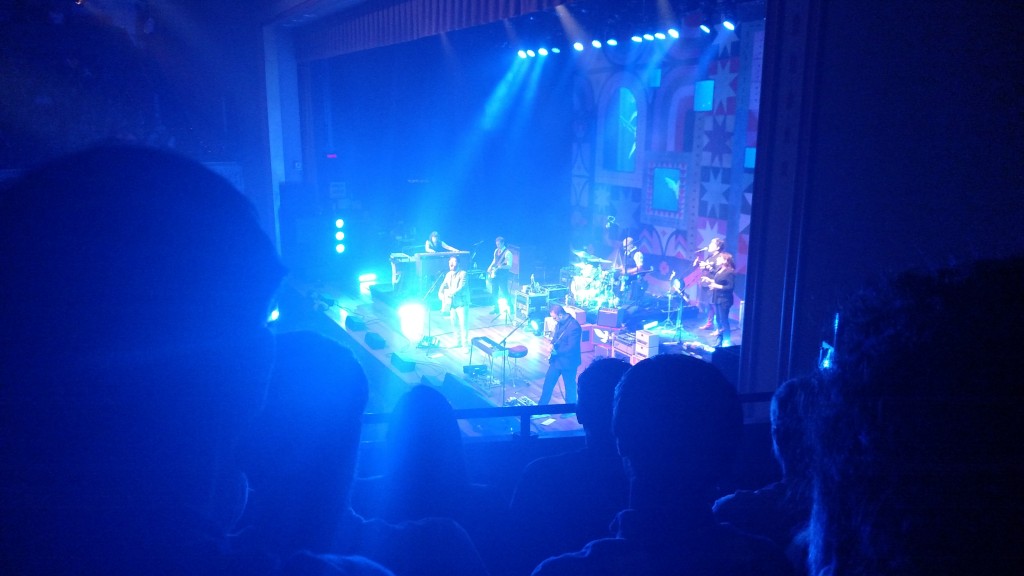 The Decemberists tear into opening song “A Singer Addresses His Audience”

Let it be known that when I last saw the Decemberists back in 2011, I successfully predicted that their first song would be “Apology Song” off their debut EP 5 Songs. Thus, when I predicted that they’d begin this show with the very appropriate “A Singer Addresses His Audience,” the Decemberists didn’t let me down and I am now two-for-two on my predictions. The Decemberists have never let me down: they’ve pumped out quality album after quality album, excellent live show after excellent live show. And Monday night, led by charismatic frontman Colin Meloy, was no different, even if Meloy and Co. had to struggle against an at times apathetic crowd at Ryman Auditorium.

After playing a recording of a poorly-played and out-of-tune high school brass fanfare over the PA, Colin Meloy walked out alone, took up his trusty Gibson Montana Gold, and strummed the booming E-chord that begins “A Singer Addresses His Audience.” By the first bridge, backup singers snuck on stage to accompany with harmonies, and when Colin started to emphatically sing “To belong, to belong” at the song’s climax (which I humorously hear as an ode to inner tubing, “Tube along!”) the rest of the band joined him before concluding the track with squeals of feedback and then turning into the pomp-and-circumstance march of 2005’s “The Infanta,” a favorite of mine. Throughout the night, the Decemberists setlist was excellent: while I was a bit disappointed at the total absence of tracks from Her Majesty the Decemberists (No “Red Right Ankle”? No “The Gymnast, High Above the Ground”?),  they covered a healthy smattering of tracks from their entire discography, including two songs from 2009’s vastly under-appreciated The Hazards of Love, which Colin humorously referred to on-stage as their “dad-rock” album.

The Decemberists cut their teeth as a touring band in the pre-Soundcloud era, and their combined experience and charisma are evident in the quality of their live performance — every song was perfect, even with Colin Meloy apologizing for a sore throat caused by a tough touring schedule and “pollen”, which any Nashvillian will understand. And as far as I’m concerned, his voice sounded find to me, easily reaching the highs of the ending refrain of “The Crane Wife 1 & 2” and the chorus of “The Wanting Comes in Waves/Repaid”, which was the setlist’s  unsurprisingly surprising highlight — surprising that they played it, unsurprising that Shara Worden’s phenomenal vocal lines (sung here by a backing vocalist) brought down the house with enough force to make even Samson blush.

Per usual, the Decemberists mixed in a healthy dose of humor and live showmanship with their set. Colin revealed the genesis of “Calamity Song” as a song he wrote to convince his son Hank to eat his breakfast (“Hank, eat your oatmeal! Hank, eat your naan bread!” Ah, ooh ooh ooh oh!”), spinning from that wordless chorus into the song proper. Likewise, he announced that they were about to play an old battle hymn once heard calling across the mountains during the War Between the States before beginning a cover of Fleetwood Mac’s “Dreams”, which itself morphed into “Here I Dreamt I Was an Architect” after the first chorus. Colin toyed with the crowd during “The Rake’s Song” and “16 Military Wives”, arranging spontaneous clapping parts for each corner of the Ryman on the former and performing call-and-response vocals during the latter. The final encore track was old standby “The Mariner’s Revenge Song,” featuring audience screams and a foam cutout of a giant whale that “swallows” the band. At all turns, the band seemed to be having fun with each other, which always livens up the performance.

However, the Decemberists did struggle a bit against an apathetic crowd, a problem that seems to plague the Ryman. There may be any number of problems which cause this — the best tickets are expensive and pre-sold, meaning that the general public has trouble getting floor seats; within 2 minutes of going on sale, tickets were being scalped on stubhub.com at inflated prices; and the Ryman pulls in tourists, most of whom buy tickets just to see a show at the Ryman and have no interest in the band itself. The result is that every show I’ve been to at the Ryman has featured a less-than energetic crowd. Even the National, led by Matt Berninger and his half-drunk screams and crowd-walking, floor rolling histrionics, had trouble getting the crowd on their feet. The two-thirds of the Decemberists’ set was no different and the crowd sat until Colin implored us to stand during “16 Military Wives”. What is most troubling is that the Ryman encourages this detached musical experience — after 10 brave souls rushed down to the clearing in front of the stage to dance during “Make You Better”, security guards herded them back to their seats.

Just a few songs later one woman rushed down again, deftly avoiding the security guards. As they closed down on her, she stretched out her hand towards Colin, who stopped playing to lean off the stage and reach out to her. Their fingers barely made contact in a moment that beautifully echoed Adam’s last attempt at connection with God in “The Creation of Adam”. The security guards took her away, and I swear to God I heard Colin say “don’t” and “come on guys” as they were closing in on her. If that’s not the most poetic image for what the Ryman has become–a heartless, commericalized, anti-fun shell of what used to be a beacon of musical expression and purity, then I don’t know what is.

In the end, the Decemberists did manage to overthrow the security guards (as Colin said they would after ending “Make You Better”) during the final third of their set; “16 Military Wives” got us on our feet and dancing, and there was nothing that the Ryman could do to stop us from turning the chilly atmosphere into one befitting a rock show: hot, sweaty, and energetic, a catharsis of dancing feet and shouted lyrics. It’s just unfortunate that even a band as skilled and fun as the Decemberists had to overcome The Man to do it.