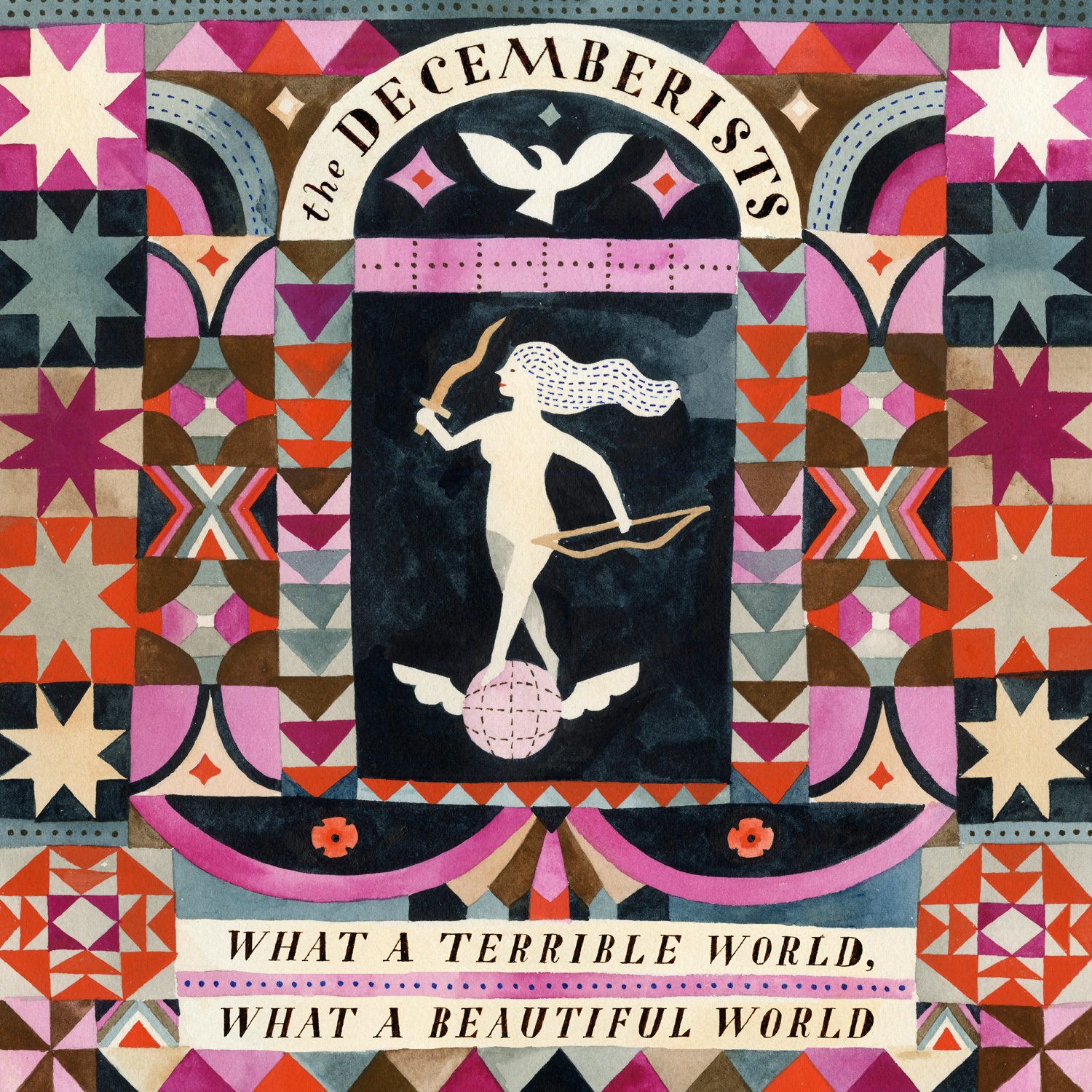 We know, we know, we belong to ya.
We know you built your life around us.
And would we change? We had to change some.

And with that, the Decemberists begin their 7th album with a knowing wink, a sad and insightful look at the relationship between a band and its audience. And sure enough, the Decemberists have changed: What a Terrible World, What a Beautiful World” is their poppiest, most buoyant album yet. Unfortunately, it’s also their least ambitious and exciting.

It is more sure-footed than prog-folk masterpiece/misstep The Hazards of Love, yet lacks the excitement, danger, emotional impact, and charm of previous albums.The aforementioned opener, “A Singer Addresses His Audience”, stands out as one of the best cuts on the album; it is also a song that announces the album as something for the diehards. Perhaps a reaction, knowing or otherwise, against the #1 album that was The King Is Dead, Terrible World is a record that pokes fun at the Decemberists and their past as purveyors of antique curiosities, spinners of tales about legionnaires, widows, and Soviet spies. Meloy makes the relationship between a band and its audience simultaneously funny and affecting; it’s hard not to laugh at both the band and myself when Meloy sings “So when your bridal processional is a televised confessional to the benefits of Axe Shampoo, you know we did it for you” — I first heard the Decemberists on an episode of How I Met Your Mother. But when he starts singing “to belong, to belong” as the song builds to a resounding climax, he does it with all the trembling anxiety of the aging rock star, clinging to relevance any way he can.

“Anti-Summersong” is a similarly tongue-in-cheek send up of all the summer songs that the Decemberists have released over the years (including one called “Summersong”). The narrator of “Philomena” feels like the “no-good boyo” from “Billy Liar“, featuring surprisingly candid lyrics about oral sex over a disarmingly twee and mischievous beat. All of these harken back to the Decemberists’ past, but they’ve always been a band that’s worked best looking forward. Each album they’ve done has revealed them to “have changed some”; Castaways and Cutout‘s pitch-perfect indie-folk gave way to the post-war malaise of Her Majesty; Picaresque’s ramshackle charm has little to do with The Crane Wife‘s love of prog. Likewise, what works best on What a Terrible World is often what worries the least about their past. “Carolina Low” is all Appalachian fire and brimstone, quietly brooding and backed with a mystic hymnal. Followed by the thunder of “Better Not Wake the Baby”, the two make a potent one-two punch in the middle of the album. “Make You Better”, the album’s lead single, is worth the praise that’s been heaped upon it. It’s a surprisingly sprightly song, pushed forward by John Moen’s steady and heavy drumming and charging electric guitar, culminating in one of the Decemberists’ best choruses.

The album’s greatest highlight, though, is “Lake Song”, a heart-rending 6-minute imagistic ode to (hilariously enough) summer. It’s one of those songs where it’s hard to pinpoint any sort of a specific narrative or story being told, in spite of being so curiously specific: “And I took a drag from your cigarette and pinched it ‘tween my finger and my thumb til it died, and the sun was low on the radio.” Yet this specificity engenders instant connection, creating a song that acts as an empty vessel to pour the details of your experiences into, molding it into something that feels at once extremely personal and completely global — an experience that is both yours and everyone’s. The song’s instrumentation is smartly sparse; a simple fluttering acoustic guitar, brushed drums, chirping piano, stand-up bass, and the dextrous guitar stylings of Chris Funk.

Perhaps, then, the problem isn’t the album’s quality, but the quantity: “Cavalry Captain” and “Philomena”, while good songs, feel expendable, and the back half of the album suffers from a trio of down songs, with “Easy Come, Easy Go” standing as one of worst songs to ever make it on a Decemberists LP. And at 14 songs and 53 minutes long, you can’t help but wonder if it would be a better album with only 10 songs. When an album stretches out to such a length, you expect to be rewarded with ambition — The Hazards of Love was a longer album than this, but the sheer bravado of writing a concept album about a forest queen, a nymph, and a shapeshifter made it feel like a breeze. What a Terrible World is quality music — perhaps moreso than Hazards was — but it’s disappointingly safe. It goes through its motions for 53 minutes without any moments of true daring.

All of this is not to say that the album is bad, or even just okay. This is undoubtedly a good album. Meloy and co. are simply too talented and too experienced to put out an album that’s anything less than good. And this is an album that is good, held afloat by a handful of standout songs: “A Singer Addresses His Audience,” “Make You Better,” “Lake Song,” “Carolina Low,” and “A Beginning Song,” the album’s stunning closer. But Terrible World is ultimately bogged down by its own size; size without ambition. While it fails to stand with Picaresque or The King Is Dead as their best work, its strengths are enough to reaffirm that if we have built our lives around The Decemberists, we can keep on living with them.