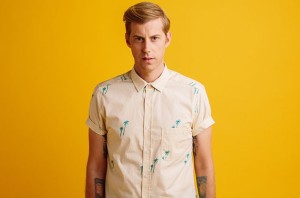 Gracing his wrist, “The River Is Everywhere,” a quote from the piece “Siddhartha” by Hermann Hesse rests on Andrew McMahon’s lower arm as a reminder that wherever you go there is always going to be a piece of you. Since the release of his latest venture as Andrew McMahon in the Wilderness, this daily reminder could not be any more relevant. The long awaited debut of a solo album came under the moniker Andrew McMahon in the Wilderness following a short solo EP, The Pop Underground, in 2013, nearly 8 years with Jack’s Mannequin and 3 full length albums recorded with high school band, Something Corporate.

Andrew McMahon first embarked on his musical journey when forming Something Corporate as a collection of classmates from high school. They went on to land a record deal with Drive-Thru Records and later their distributor MCA with their debut album Ready…Break revealing bonus track, “Konstantine,” that became a surprising crowd favorite as fans related to the raw emotional McMahon describes in the song.

Jack’s Mannequin emerged out of a break from Something Corporate when McMahon took his first summer off of touring to write emotionally charged lyrics full of meanings left to be decoded by listeners on Everything In Transit, an album solely funded by McMahon who contributed $40,000 to recording each song to its absolute best. In an ill-fated turn of events, McMahon was diagnosed with cancer the day the last track on the album was finished being mastered. He immediately went into chemotherapy, and although the album was released, it was not promoted until after he overcame the cancer and was able to tour again. He went on to release two more albums with the band, The Glass Passenger and People and Things giving us one of my favorite songs “Platform Fire.”

Upon announcing an end to the use of the name Jack’s Mannequin, Andrew McMahon released his first solo EP titled The Pop Underground. The EP took a more electronic direction while still featuring his trademarked piano based songs. Loaded with catchy pop lyrics and synthetic beats, McMahon notes that the album came together unexpectedly as the pieces all fell in place without fault.
As promised, this fall McMahon released his first solo, full-length album self-titled Andrew McMahon in the Wilderness. Although sonically different from previous projects, even his solo EP, the album shows no lack in creativity and songwriting magic as he delved into precious life experiences such as the birth of his first daughter Cecilia. Two of the highlighting tracks off the album are “Rainy Girl” and “High Dive.”

Currently on his fall headlining tour, supported by Fences and Junior Prom, Andrew McMahon in the Wilderness is set to play at Nashville’s own Third and Lindsley this Saturday night. “The River Is Everywhere,” a quote that stands for not only McMahon but also fans, such as me, who have followed his success throughout bands while allowing his music to be a soundtrack to our lives, is now ever relevant as I go to see him for 9th time at one of many venues and cities.