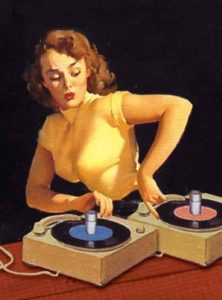 We all have that friend who talks incessantly about how they relate to Twenty One Pilots on a spiritual level, then ask you if you’ve heard “that new one from Suicide Squad.” They appear to listen to “Chocolate” by The 1975 on a loop on Spotify, with a brief intermission of Foster The People’s “Pumped Up Kicks.” They drone on about how they are literally obsessed with Imagine Dragons and can’t wait for fall just so they can play “Sweater Weather” on their new record player as they down their third Pumpkin Spice Latte (PSL if you’re edgy).

In fact, this friend may even be you.

The distinction between “alternative” music and America’s Top 40 is as muddled as ever; what once constituted the music of obscure cafes and underground hangouts has been engulfed by the *gasp* mainstream media. We are now forced to confront the glaring question: what is truly considered alternative music? Does exhausting the ‘Underground Hits’ playlist on Spotify count? How about digging through cardboard boxes in record shops until you find the poor, neglected album tucked under the bottom flap?

Even yet, how many people can we tell about our “alternative” finds until they become *shudder* mainstream? Ten? Twenty? Are “alternative” listeners even allowed to have that many friends?

Personally, I enjoy a good car ride jam to Mr. Brightside. I unashamedly listened to the Lumineer’s new album on a loop when it came out (and was thoroughly disappointed when I realized their Nashville concert was already sold out). I share my “obscure” music finds with friends, even though I claim credit if it ends up on “top five at five” the next month (I’m lookin’ at you, “Trouble” by Cage the Elephant).

Alternative music is not meant to be solely relevant to a contained community of hipsters and misfits. Doing so is limiting the reach of an artist who should be appreciated and enjoyed by all those choosing to do so. One of the many beauties of music is its ability to elicit wholly unique experiences and reactions from its listeners, and slapping the “mainstream” label on it doesn’t change this fact.