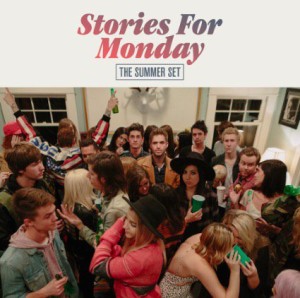 Stories for Monday is known as The Summer Set album that almost didn’t happen. It had been three years since the band released anything, though the band tried to remain active with the occasional tour during that time. Still, there were a lot of questions about whether or not the band had met its end.

Brian Dales even came out and said that because of the amount of difficulty the band had trying to write songs for this new album and the amount of comfort they all felt at the thought of the end, even the band members weren’t sure if there was going to be a fourth album. However, story goes that inspiration struck Dales one late night. He wrote the lead single from the album, “Figure Me Out,” on the piano in his parents’ house in one sitting in the middle of the night. The song was the jumpstart the band needed. The rest was history, and we now have the pop-punk eccentric sound that is Stories for Monday.

One thing that stood out to me about Stories for Monday was how much it felt like a Summer Set album. Brian Dales’ lyrics are just as sassy, sarcastic, and unapologetically honest as ever. The upbeat pop sounds infused with some slight punk rock vibes is typical of their sound. The band stayed true to their sound and how they have always defined themselves while including some new elements, like in “All Downhill From Here” and “Wonder Years.”

Though there are no bad songs, one of the best would have to be “Jean Jacket.” The ballad starts off slow before building up and then falling back down with a saxophone-heavy bridge. The song picks up again, and makes us all wonder where in the world is this Thunder Road. Another fantastic song is “Missin’ You,” and despite the title, it is actually about not missing someone and being free of a person. Other notable mentions include “All My Friends,” which includes the Nirvana reference that we are so used to seeing on at least one song from each The Summer Set album. The final song, “Wasted,” is an incredible end. It is upbeat and calls out to anyone who has ever felt like a waste or disappointment.

Overall, Stories for Monday is another solid album from The Summer Set. It is everything that one would expect from the band, with the occasional small attempt to experiment with new sounds thrown in there. Brian Dales continues to try to bring in meaningful ideas while keeping songs light and fun. Though the end still may be in sight, fans can rest for the moment and enjoy this new era in The Summer Set’s life.