It’s no secret that Aphex Twin (AKA Richard D. James) is one of my favorite artists, but I can see how someone who’s yet to give him a listen might be intimidated by his scattered discography. Following are my picks for the top 10 Aphex Twin productions.

10. “Analogue Bubblebath” – This track from 1991 stands as an early flash of brilliance from Richard D. James. The title is entirely descriptive of this soft-synth anthem. 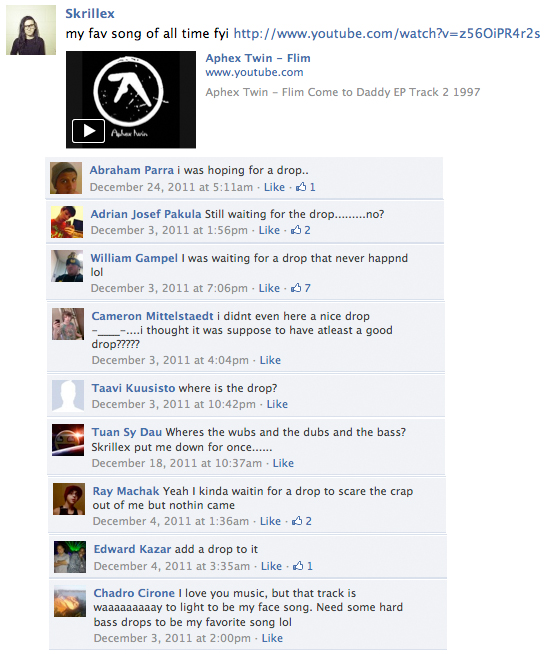 8. “Vordhosbn” – This standout from Aphex’s 2001 collection Druqks demonstrates just how far the artist has come since his “Analogue Bubblebath” and “Selected Ambient” days. Even at his most manic, Aphex Twin manages an underlying emotional connection that breakcore peers like Venetian Snares are never able to quite figure out.

7. “To Cure a Weakling Child” – This isn’t the only track to make it on this list from Richard D. James Album, which is jam-packed with amazing productions. If early Aphex Twin operated in a restrained and friendly environment, and late period Aphex found himself bursting at the seams, this album is the collision of the two, aptly demonstrated on songs like “To Cure a Weakling Child”.

6. The Tuss – “Synthacon 9” – Unfortunately we haven’t seen much of RDJ since the turn of the century. Besides swinging grand pianos across the stage at his concerts, in 2007 music fans picked up on some uncanny similarities between the debut album of electronic “duo” The Tuss and the legend himself. It’s most likely an Aphex Twin production, but at the very least it sounds like what he should have been doing at that time. Either way, Rushup Edge is essential listening for serious fans. Basically the album is Druqks minus all the bloat and distraction, and track 1 “Synthacon 9” is the best place to start.

5. “Mookid” – The standout from underrated album I Care Because You Do.

4. “Girl/Boy Song” – Gorgeous strings and xylophone plus another of Aphex Twin’s blistering drum machine attack patterns. The juxtaposition here works perfectly. I rarely hear a song as good as this one, save the 3 songs listed below.

2. “Mt Saint Michel + Saint Michaels Mount” – 8 minutes of the densest, darkest breakbeat RDJ ever produced. The mutilation of the eerie vocal sample at the ending is stunningly unsettling. Also be sure to listen for the Donkey Kong sample.

1. “Lichen” – Selected Ambient Works Volume II overall takes a more patient listener compared to the rest of Aphex Twin’s work. Instead of cramming every possible sound in like in his later work, RDJ proved even he can operate from a “less is more” mentality. “Lichen” in particular stands out as maybe the best ambient track I’ve ever heard. It’s 4 minutes of Brian Eno at his most uplifting, and is the kind of thing that really should have gone on for 40 minutes. “Lichen” justifies the “repeat 1 song” option in music players.