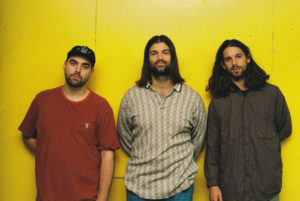 On October 18th, Turnover, the hallmark of Indie-Emo bands, played Exit/In, celebrating the release of their most recent album, Good Nature. Iconic for their sophomore album, Peripheral Vision, they drastically altered their sound in Good Nature, shifting away from emo-esque influences and focusing solely on optimistic dream rock indie vibes. Since this is their first tour with the new album, the anticipation to see how they would sound was insurmountably high.

The first act of the night was Emma Ruth Rundle, a singer songwriter who brought a fresh soulful and emo twist to the genre. Her haunting vocals, mix of subtle and driving melodies, and echoing rhythms set the tone for the night, as one that would bring out the angst in even the purest being.

Following her, was Elvis Depressedly, whose name perfectly portrays the essence of the their sound. Sad vocals, underlined by eerily peaceful melodies, made sure that the emo-esque theme of the night was amplified to the max. Mat Cothran, the frontman’s, stage presence was out of this world, jumping, stumbling, and faux fighting with his fellow band members. It would be painstakingly difficult to find a more self-deprecating artist, but with constant references to sadness, messing with the cover art for Good Nature, and pretending that Turnover hated them, their persona meshed completely with the vibe. He was enticing to watch, and cemented himself as WRVU’s designated manic-pixie-dream-boy.

Turnover came onto stage and immediately kicked into gear singing the first single, “Super Natural” released for Good Nature. While it got the crowd immediately involved, it was a pretty drastic change from the emo esque theme of the night.

The whole atmosphere shifted once the band broke out into the first song of the night from Peripheral Vision, “Hello Euphoria.” The emo presence was back and the audience reached a new level of excitement, that increased with transition into one of their most popular songs off of Peripheral Vision, “Dizzy on the Comedown.” The shift in the atmosphere during the songs from Good Nature and Peripheral Vision was drastic, but not bad. While the crowd was definitely more enthusiastic during Peripheral Vision, the apprehension of how Good Nature would sound, was replaced with euphoria, as it sounded incredible live.

Towards the end of the set, the front man, Austin, gave a touching monologue about information overload and how humans have the autonomy to decide for themselves how they analyze information and ultimately what they end up doing with that. It was a refreshing reminder how artistic icons operate in the same world that everyone else does. Through this connection, the audience was primed them for the next song, “Bonnie (Rhythm & Melody).” This song enthralled the audience and brought everyone to a whole new level of enjoyment that no other Good nature song had done yet, and was a blast to hear. After this, there was one final song of the set, arguably the most anticipated song of the night, “Cutting my Fingers Off,” the first track off of Peripheral Vision. The excitement released from the audience from the first chord, echoed through the venue and lasted the entire song, with people singing along, dancing, and feeling emotions on an ethereal level. Once the song ended, the band left the stage and left the audience chanting for more.

After a brief minute, Turnover came back on stage and closed out the concert with a three song encore before finishing the night for good. The concert was an amazing one, and proved that even with the drastic shift in sound, Turnover is as incredible as ever.