These past few days, most of Nashville has shut down due to a crazy ice situation. In addition to many restaurants, malls, and schools being closed, several local concerts have also been cancelled or postponed. 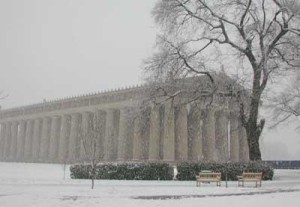 1. The Alias Chamber Ensemble’s planned Tuesday (Feb. 17) winter concert at Vanderbilt’s Blair School of Music has been canceled. Word is that they’re looking to reschedule eventually, but there are no set plans yet. Check out this video of them performing “Boiling Point”

2. Down at 3rd and Lindsley, two shows were cancelled on the 17th. Hal Newman and the Mystics of Time cancelled a Mardi Gras performance (below is a video to show you what a good time that would’ve been). Scheduled for later in the evening, Sixwire, Charles Eston & Danielle Lauderdale cancelled their 8pm show.

3. Blackberry Smoke‘s concert at Ryman Auditorium on Wednesday has been postponed. This group, if you haven’t already heard of them, is sort of a Southern staple. They’ve performed with the likes of Lynyrd Skynyrd, ZZ Top, Zac Brown Band, and the cast of the Sons of Anarchy. Too bad you’re not going to see them tonight. Check them out below in this cute little YouTube video.

4. At the High Watt, Into it. Over it. and Kevin Devine were supposed to play last night (Tuesday night).  The punk-ish acoustic singers had me excited…too bad the tour won’t be making up this cancellation by rescheduling. Below is a video of Into It. Over It. performing a couple songs.

5. Rocketown was meant to host Lee Dewyze and The Tragic Thrills on Tuesday as well but looks like the ice also managed to keep them from Nashville. Mr. Dewyze was a past contestant on American Idol and I found an audio clip of him performing “Falling Slowly” with another contestant. Enjoy it – then be sad you missed seeing him live.