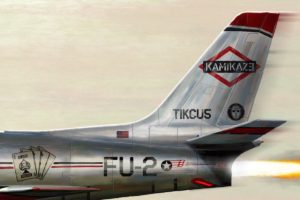 I thought Eminem was done. We all did. I can remember listening to “Arose,” the last track off of Eminem’s Revival, released this past December. In this song, Em takes us back to 2007, where he recounts a play-by-play near death experience in the hospital after an overdose. This is truly an emotional track, with Bette Midler’s “The Rose,” sampled under Eminem giving goodbyes to his family and apologizing for not being there for Hailie and the other kids.

You gotta listen to this. Bring the tissues..

At the end of the track, the beat switches and Shady comes back in full vigor and spits a short verse declaring that this is the last album he’ll put out. It was truly the perfect farewell for the seasoned artist and it brought tears to my eyes.

But Revival was not so well received. Many fans did not appreciate the pop-song style approach to the album, as over half of the tracks feature big names in genre today like Ed Sheeran, Beyoncé, X Ambassadors, and Pink. Many believed that Eminem was a sellout, using these collaborations for easy chart-topping.

So on August 31, 2018, Eminem shook the world with a surprise release of Kamikaze, his tenth studio album. This album is a direct response to the critics of Revival, as Eminem was out to prove that his material was better than what the current “mumble rappers” are making now. Eminem goes back to his roots, awakens Shady, and does what he does best: puts out a diss record. He doesn’t hold back either, going after the biggest names in hip hop and rap today: MGK, Lil Pump, Migos, Tyler the Creator, and (possibly) Drake.

I would love to analyze the beautifully intricate rhythm and rhyme schemes that Eminem put into this album, but in order to do the Rap God justice I would need to write a full dissertation on the subject. So other than the story leading up to Kamikaze’s release, here’s what you need to know:

1.Old Eminem is back. While many critics claimed that he may have gone soft in Revival, there is no doubt that Slim Shady is back on the mic. The classic rap beats of his early music are the backing tracks in Kamikaze, bearing true homage to a pure rap style, “unbutchered” by autotune or a sung refrain.

2.Eminem keeps it real and doesn’t deny his flaws. In true 8 Mile fashion, he proves that his proficiency reigns supreme despite his occasional shortcomings in the industry.

“I done won a couple Grammys, but I sold my soul to get ‘em” –“Lucky You” (feat. Joyner Lucas)

3.There are numerous Easter eggs for those who have followed Eminem’s career or who have a general knowledge of the hip hop world. Some of this comes naturally with diss tracks and rap in general, but Eminem really pulls out all the stops on Kamikaze.

While I was admittedly upset that Eminem had to tarnish his perfect farewell, I appreciate his reason for not quitting the rap game. Eminem is fighting for the integrity of the genre that gave so much to him, and is showing the world that he is (and forever will be?) at the top of the ladder.