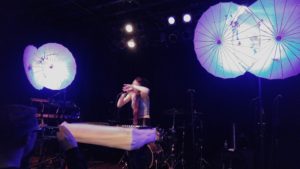 Opening acts live in a complicated space. In most cases, they’re small acts the crowd doesn’t know just trying to get their name out there. More times than not, they’re almost completely forgotten by the time the main act has taken the stage.

HANA was not one of these opening acts.

HANA opened for Shamir at Exit/In last November. I can still vividly picture walking into Exit/In as she performed the first song of her set. The faint synth lines, drum machine beats, and angelic voice that characterize her songs instantly drew me in. Manned with only a microphone, keyboard, and a drum pad, she dominated the stage with a confidence not typical of opening acts.

This confidence was well understood once I learned about her career. Starting her career as Hana Pestle, she released This Way, a folky singer-songwriter album that failed to gain much traction. She toured the country for a few years, never gaining much popularity. Claiming she “would never sit and listen to my own music,” a stylistic change was in order. Circumstance brought her and Bloodpop/Blood Diamonds together, sparking the creation of HANA. Bloodpop, having produced songs like “Go” by Grimes and “Sorry” by Justin Bieber, served as inspiration for her new synth-pop style. HANA taught herself how to produce electronic music, leading to her first two singles, “Clay” and “Avalanche.” The tracks instantly grabbed the attention of Grimes and Lorde, similar artists who had nothing but praise for this obscure artist. The praise earned her a backup singer spot for Grimes when she opened for Lana Del Ray on tour, building a close, collaborative friendship between the two. It was clear at this point that HANA had found her voice.

Since opening for Shamir, HANA has released a fantastic self-titled EP, toured again with Grimes (and shot seven music videos while on tour with her), and began touring with Purity Ring. Given these connections and praise from some of the biggest synth-pop artists out there right now, HANA is shaping up to be the next big thing–and proof that, sometimes, the unknown opening act can be so much more.