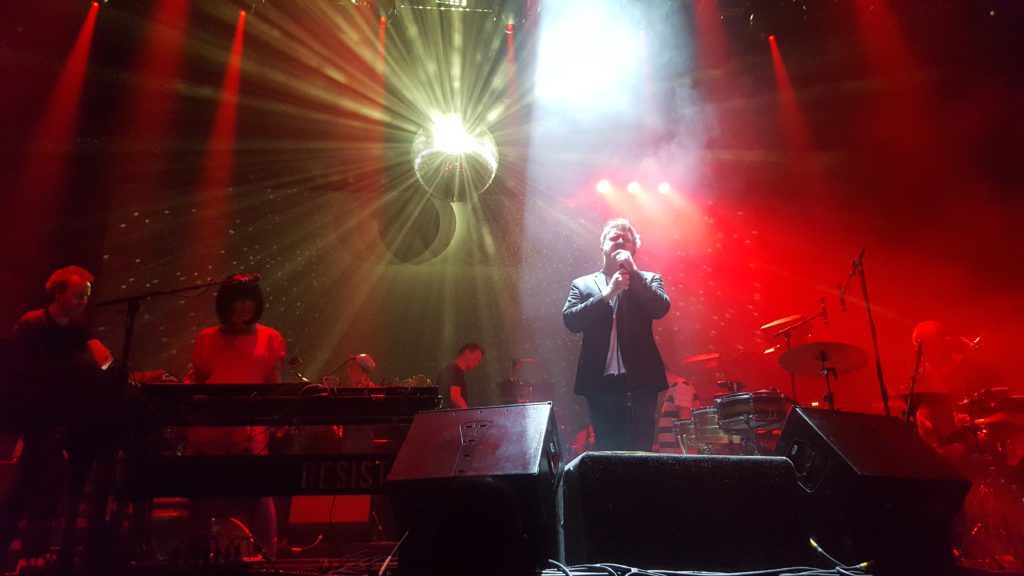 LCD Soundsystem’s show at Nashville Municipal Auditorium on October 20th for their american dream tour was one for the books. They’ve played the festival circuit last year and several shows in Webster Hall and Brooklyn Steel in New York, but haven’t had a formal tour to themselves since their 2016 reunion. The band announced their breakup in 2011 and proceeded to play a legendary string of shows in Madison Square Garden documented by the film “Shut Up and Play the Hits”. Their triumphant return last year was fully brought to full realization with the release of the album american dream on September 1st, put out by DFA Records, the label of LCD’s frontman James Murphy.

The venue is a historic sports arena and concert venue that has a lot of character to it, a reason it’s the home of the Musician’s Hall of Fame and Museum. The venue hasn’t been renovated since its opening, shown by the blown up tickets of big-name acts on the wall, from Aerosmith to Springsteen to the late Tom Petty. Walking onto the massive floor of the venue was a surreal experience. Fog machines and spotlights circled the floor an hour before the opener even came on, transporting the audience into to a magical world of swirling lights and sounds. The DJ spinning some obscurely fantastic dancey cuts was a treat, and fit with the ambiance perfectly. (yes, there was a DJ before the opener!!) The entire experience surrounding the show was expertly curated, and I’d expect nothing less from James Murphy. 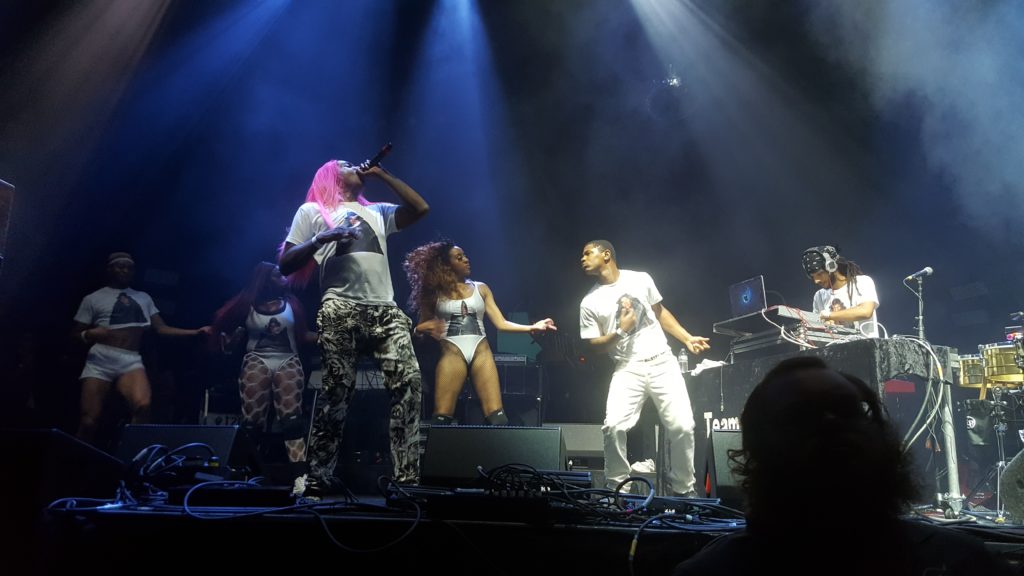 LCD Soundsystem’s music uses a lot of very stark juxtapositions in every aspect, and their choice of Team Freedia as an opener certainly feeds into that notion. Team Freedia consisted of Big Freedia and her team of four dancers. If you haven’t heard of Big Freedia before, she’s known for popularizing bounce music in the late 2000’s. In her own words, bounce music is “up-tempo, heavy bass, call-and-response music. And it has a lot to do with the ass shaking. Lots of energy and lots of ass shaking.” And there was plenty of both. The set was replete with breaks where Big Freedia would start yelling the same word over and over while the team of dancers took their place in the spotlight. Team Freedia brought an insane amount of energy to the stage and definitely achieved their goal of getting the crowd hyped for LCD Soundsystem.

LCD Soundsystem stumbled out of the wings of the stage one by one like awkward teenagers, sheepishly waving to the crowd before starting on their instruments, creating an interesting effect as more and more musicians of the 8 piece band flooded the stage. Then, out of nowhere, James Murphy appears at the mic in the spotlight all angel-like and jumps right into the mellow jam “oh baby”. It wasn’t a very energetic opener, mostly because of the bassist’s consistent behind-the-beat playing. But LCD Soundsystem is known more for their brilliant building of songs into intense emotional climaxes from more mellow starts, which is a theme that held true through this show. The set continued with another low-energy rendition of a hit off their newest album with “call the police”, with the bassist still behind the groove of the rest of the band. This trend continues through “I Can Change”, but the fourth song, “Get Innocuous!”, sees the bassist on a synth and the energy finally picks up, and it never drops to the same levels of the beginning again.

Their fifth song, “You Wanted a Hit”, sees LCD turn to their darker and more experimental parts of their catalog, rife with extended instrumental breaks featuring a multitude of crazy cool synth textures. The energy only picks up at this point. They transition straight into “Tribulations”, which is even more bittersweet than the previous song. James Murphy really proves that he’s a jack of all trades. In this song he’s not only singing. He also goes over to the drum set and plays the cymbals with the drummer, plays some synth, and messes around with other synth player’s knobs, drastically changing the sound. The band brings “Tribulations” to a raucous finish, complete with alternating backlights and top lights, creating both silhouettes and the full image of the band simultaneously while Murphy slides his wine glass down the neck of a guitar, producing a sick dissonant gliss. The band ends the darker section with “Movement”, highlighted by Murphy and the guitarist playing with feedback by putting the vocal mic up to the guitar amp.

With a return to the bittersweet danceable pop that LCD is known for, they continue the magical set with “Someone Great”. Murphy’s mic cuts out in the middle of the song, but he pulls out a second, identical mic from out of nowhere, almost like it’s planned.

Just when you think they’ve completely brought you out of the darker energy, they plunge into a frenzied rendition of “Yr City’s a Sucker”. In a true LCD way, they flawlessly claw their way out of the dark hole they created and turn it into a funky, upbeat jam by the end of the song, topped off with the disco ball reappearing. They continue with “Change Yr Mind”, followed up by “tonite”. The backstage is lit by single white lights, which creates a sky of stars above the band. The energy is still building, and at this point it’s very frenzied, with the crowd starting to mosh a bit.

LCD finishes out their main set with “Home”, which is the epitome of an LCD Soundsystem song. It’s bittersweet. It’s extremely danceable. It’s beautiful. They end the main set by having all the members leave the stage one by one, creating a reverse effect of how it all started, with the layers being taken away. It’s a beautiful way to leave the stage and sets up the encore extremely well. 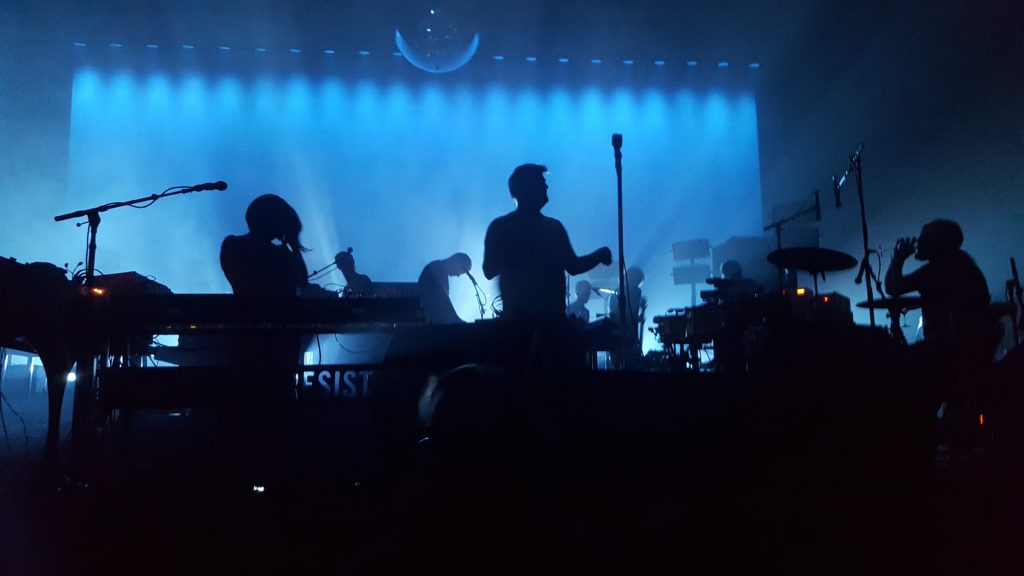 (courtesy of the author)

The band comes back out to raucous applause with “Losing My Edge”, which is another bittersweet jam that discusses Murphy’s aging in the New York DJ scene that’s run by a crowd that’s much younger than him, although he’s been through all the crazy events that inspire those DJs. There are insane noisy instrumental breaks with strobe lights that make the band look like a stop motion movie that keep getting longer and more intense as the song goes on. The encore continues with “emotional haircut”, one of the band’s top tracks from their newest album. The spotlight returns to Murphy just like how he came out in the first song, but quickly transitions to a spotlight on all the other the band members, which goes very well with Murphy yelling the track’s title to the band’s instrumentals directly afterward.

The penultimate song of the show “Dance Yrself Clean” translates immaculately to the live stage, with the crowd singing along to every word in the soft, extended introduction. When the massive and immediate drop hits, the entire crowd goes insane to the red and blue strobe lights. This point is definitely the climax of the concert that LCD has built to, and it’s purely magical. The band finishes their show with “All My Friends”, and forgoes all the frills and theatrics used up to this point.  The finale is just pure music, pure bliss, pure energy from the band interacting with each other. The focus is on the band members having a great time playing great music. It’s an unadulterated denouement to an unrelenting and unbelievable show.