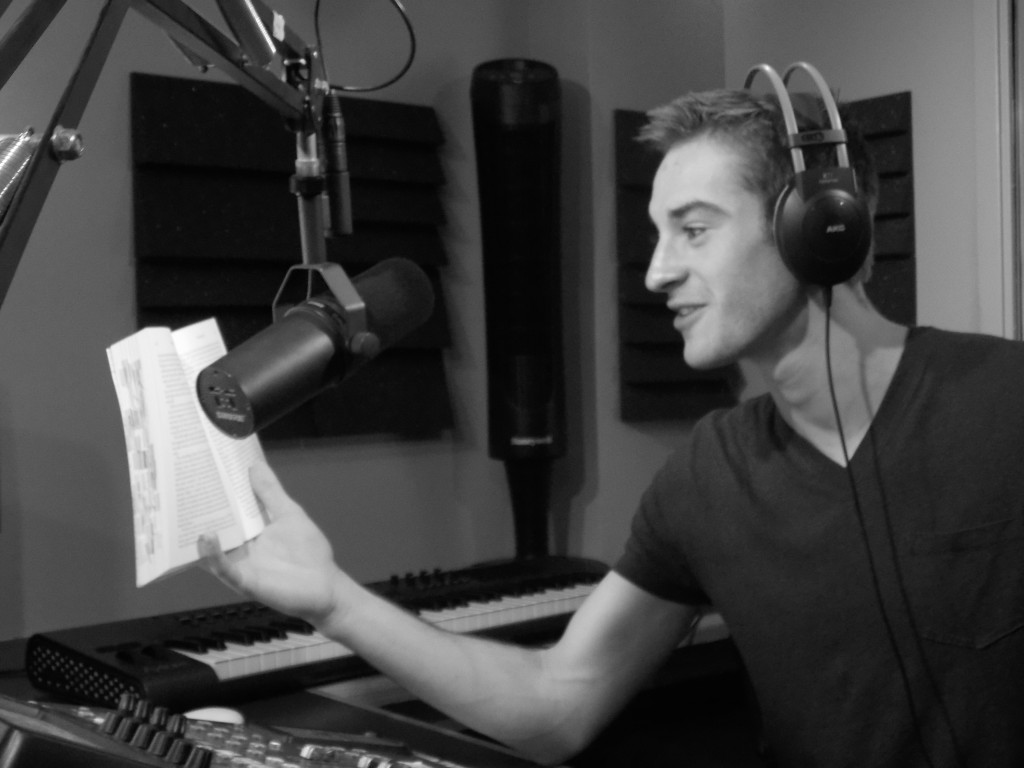 Josiah Williams in the studio. Photo by Jamison Stoike.

When Josiah Williams, a trombone performance major from Downer’s Grove, Illinois, isn’t performing in a Blair ensemble, you might find him reading something like this:

She’s all states, and all princes, I,
Nothing else is.
Princes do but play us; compared to this
All honour’s mimic, all wealth alchemy.
Thou, sun, art half as happy as we,
In that the world’s contracted thus.
Thine age asks ease, and since they duties be
To warm the world, that’s done in warming us.
Shine here to us, and thou art everywhere;
This bed they center is, these walls, thy sphere.
(John Donne, “The Sun Rising”)

Josiah’s love of poetry informs one of WRVU’s most unique shows: Wax Poetics. I sat down with the DJ this week to discuss his show, how it started, and what he’s discovered along the way.

What is Wax Poetics?

Wax Poetics is a play on words: I play all vinyl music. I’ve been growing my collection and hitting up Grimey’s, but I rely on the station’s collection of vinyl quite a bit also. But I play all vinyl and I read poetry in between songs; I usually get about 8 songs in and I read a poem between each one. This year I’m taking a poetry class—it’s called “The Bible in Literature”—it’s with Gottfried. I’ve also taken a “Poetry in Music” class, and an American poetry class; It’s something that I’m interested in and through Wax Poetics I get to share that, discover new poems, discover new music.

Do you try match the content or theme of the poems with the music?
I do! I try to do a theme for each show. This past week it was “gold”. In my class we read some John Donne poems that had to do with alchemy—turning metals into gold—and then I played all instrumental brass music, which we’ve got a bunch of in the studio.

What genres of music do you typically play? Do you mix it up?

Jazz gets in there a good bit, but I’m not really limited to any genre. I’ve played shows where it starts with classical music and then ends with a hip-hop song, or maybe it’s all hip-hop, or half hip-hop, half jazz. I’ve gotten some pop in there, too, like Beach House, or older stuff like Earth Wind & Fire, Chuck Mangione. I think I played a Rick Astley song [laughs]. So definitely the genres are all over the place because I’m constantly discovering what’s in the station. I’m kind of limited by the form of the show, so that allows me to discover new music.

How long have you been hosting Wax Poetics, and do you plan to continue?

This is the second semester of Wax Poetics. All of last year, sophomore year, I did a show called Back Atcha. It was also a specialty show, and it was all songs that are sampled in hip-hops songs. Another DJ did a show that was all hip-hop music that features sampling. I was like “Oh, that’s a really cool idea, do you mind if I bend that a little bit?” There was a lot of jazz, blues in that show as well. I also took that opportunity to talk about what sampling could mean, and what the artist was trying to say.

All that’s to say that I’ll probably try to come up with a different show for next year, in part because I’m limited to the pool of records that I own or the studio has, and because I’d like to do something new.

Any ideas on what your show may be next year?

I’m still waiting for inspiration. Honestly, sometimes the name of the show is the hardest thing to come up with. So I knew I wanted to do something with vinyl, but the reading poems thing didn’t hit me until I came up with the name “Wax Poetics”. I was like, “that’s a cool name, but now I have to justify it!” But between now and August I should be able to come up with one more pun!

What’s your favorite unexpected discovery in the WRVU record collection?

There’s an album called All-Star Trombone Spectacular. [laughs] I pulled it out and I was like, “this is so obscure!” The first side of it is a ballad medley, and it’s fifteen minutes without stopping. It’s one track. And the second side is an original tune, and it’s twenty minutes long. I couldn’t use it, but it’s super cool that it’s nine trombonists playing on one record, which is just crazy.

What’s your pitch to get people to listen to Wax Poetics?

Has to be Count Basie Swings, Joe Williams Sings.

You can hear Josiah host Wax Poetics from 5-6 PM every Sunday right here on wrvu.org