On Tuesday, September 26, 2017, Memphis rapper Young Dolph was shot near the Loews Hollywood Hotel and hospitalized in critical condition. Two weeks later, Dolph is on the road to recovery, having survived his second shooting this year. If you haven’t been following the drama, here’s a rundown:

Young Dolph and Yo Gotti have beef. The supposed origin of said beef is Dolph’s rejection of Gotti’s offer to sign to his record label in 2014, but the first public display of shade doesn’t appear for another two years. A seemingly unprovoked subtweet from Dolph referencing this 2014 incident and accusing “bra” [Gotti] of being a hater surfaced less than two weeks after Gotti’s “Down In the DM” claimed No. 1 on Billboard’s Mainstream R&B/Hip-Hop airplay chart early February 2016. One week later, Dolph announced his debut album title: King of Memphis—a term Gotti repeatedly used to refer to himself. Dolph continued to come for Gotti in the months following with virtually no response. Dolph briefly feuded with one of Gotti’s CMG artists, Blac Youngsta, but all issues seemed to be resolved after Youngsta’s “Shake Sum” (featuring a Dolph diss) was released.

Dolph reinstated the feud in February 2017, explicitly naming “Ho Gotti” in his diss track “Play Wit Yo’ Bitch.” Gotti replied with his own diss track, “Don’t Beef Wit Me,” and Dolph fired back with a music video for “Play Wit Yo’ Bitch” featuring a Gotti look-alike. The next day, Dolph’s bulletproof SUV was shot at 100 times in Charlotte, NC, but it wasn’t until almost three months later that the van involved in the shooting—which Blac Youngsta had rented—was discovered. Youngsta turned himself in at this time, but claimed the van was stolen and he was not responsible for the shooting. As Youngsta walked into jail to surrender to the authorities, he was recorded saying: “It’s obviously someone ratting, someone snitching.”

Fast-forward to September 2017 and Dolph is shot at again, this time without the protection of a bulletproof SUV. TMZ was quick to announce that Yo Gotti had been named a person of interest, and while LAPD clarified that this was false, they did arrest one of Gotti’s boys, Corey McClendon.

Artists often “conveniently” make headlines right before dropping something new, and the all-too-perfect timing of almost every conflict between Dolph, Gotti, and Youngsta might indicate that the rappers were using their beef for promotional purposes. But what caused the rivalry to escalate to such extremes? It’s possible it was simply the result of an intense rivalry and the Second Amendment, but a more exciting theory is the possibility of some level of cooperation to create a whole new level of buzz around their work. Could the rather quick turnaround (34 days) between the SUV shooting in Charlotte and Dolph’s Bulletproof album drop suggest some level of planning? Could Dolph’s convenient ownership of a bulletproof SUV and the nice, round number of 100 shots fired (“100 Shots” is the first track on Bulletproof) be further indications? Could Youngsta have been referring to Dolph when he accused someone of “snitching” about the van? Could Gotti’s crew have shot Dolph in Hollywood as payback for betraying them? Maybe. 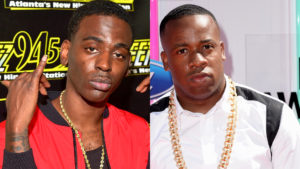