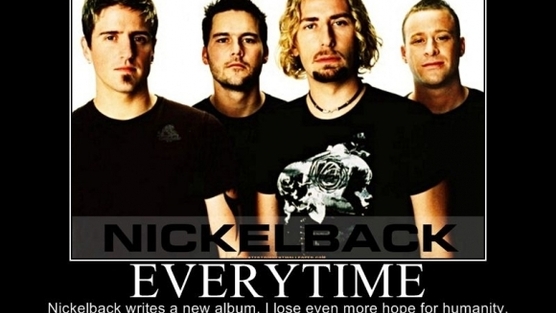 But why? …Okay, that soul patch is pretty bad.

This past weekend, I was having a GroupMe conversation with a few of my fraternity brothers and, somehow or other, Nicolas Cage popped up.  He always seems to do that in the strangest of places.  We threw around the idea of having Cage be the entertainment for our next party–“he probably needs the money,” quipped our social chair–when I brought up the possibility of a Nick-themed rager: Nicolas Cage PLUS Nickelback.  So bad it would be legendary.  “Cagelback: Because we hate you.”

We all had our laughs but then I remembered something: I used to like Nickelback.

In fact, a lot of people liked Nickelback, and a lot of people still do like Nickelback.  They’ve sold over 50 million records, their song “How You Remind Me” was named Billboard’s Rock Song of the Decade for the 2000s, and for a period of time from about 2005-2008 they were undoubtedly the biggest rock band in the world and possibly even the most popular musical act overall.  I remember slow-dancing at bar mitzvahs to “Photograph” and watching the music video to “Far Away” top the charts on VH1’s countdown of the week’s top videos; my sister and I would sing along to “Rock Star” as it played on a Top 40 radio station.  For a taste of nostalgia, have a listen to their 2005 world-beating album All the Right Reasons.

Nowadays, it’s hard to believe that Nickelback was ever so popular, but I have a couple of theories that may explain it.  First of all, the post-grunge wave was still dominating alternative rock, about six or seven years in the making.  By this time, the cream of the crop had had time to separate itself, and that cream undoubtedly included Nickelback.  (Foo Fighters and Red Hot Chili Peppers were both equally huge contemporarily, but by changing their style with the times they avoided the Nickelback syndrome.)  Second, other popular genres of music were at a nadir.  Rap was dominated by the minimally creative Atlanta hip-hop scene and crunk, while more lyrically and musically innovative rappers like Kanye West, Jay-Z, and Eminem were either just getting started or laying low.  Hip-hop and R&B were dominated by the Black-Eyed Peas (a lesser version of Outkast) and Justin Timberlake, with little else to speak of.  U2 and Coldplay were both huge and Muse was growing, but their more melodic rock had yet to become big in bands on this side of the Atlantic.  Meanwhile, country had yet to make the transition to mainstream pop and electronic music was nowhere near what it is today.  All told, there was plenty of room and plenty of reason for alternative rock to be dominating the Top 40.

But musical tastes change, and probably the biggest loser between 2005 and today has been alternative rock.  While rock music is still being produced today and bands like The Black Keys and Cage the Elephant still have guitar in a featured role, today’s rock is about creating a unique sonic atmosphere and filling that space with compelling lyrics.  The sex, drugs, and rock n’ roll of Nickelback and its followers (Shinedown, Saving Abel, Hinder, etc.) just doesn’t cut it anymore, and sounds very monotonous–it’s hard to tell one song from another, because the songs mostly treat the same subject material and follow a formula.  Take this example, generously provided by the Internet:

Now, Nickelback is not the only band that follows a formula.  I have written in the past about AC/DC’s refusal to accept that it’s not 1980 anymore.  Even today’s darlings, Mumford and Sons, have discovered a sound that sells records and are riding that train as long as possible.

This clearly isn’t the whole reason, then, that Nickelback is so hated.  The Village Voice does a great job of summing up three major reasons why people hate the band.  The main gist of it–their sound is out of date, they haven’t dislodged the target from their backs, and hating them is a convenient way to become anti-mainstream–is all correct.  But as a psychology major, I see another underlying reason: group polarization and groupthink.  I find it hard to believe that an average person cares enough about Nickelback to have a solidly formed opinion of them.  But when the internet became home to a minority that has a consistent, confident, and charismatic anti-Nickelback stance, that minority gained the power to dominate all thought about the band.  These were the opinions to which people were exposed the most, and thus they were the most readily available information when it came to thinking about Nickelback.  As the minority rose in strength, it made any positive thoughts about Nickelback taboo.  In an effort to hold the “right” opinion and fit in with the crowd, individuals came to express more negative feelings towards the band in groups, thereby intensifying the overall negativity.  And any private dissent remained private, for fear of being ridiculed for liking such terrible, formulaic music.  It’s a pretty simplistic look at the psychology behind this phenomenon, but you can capture the main point of my argument: Nickelback is hated because it became cool to hate Nickelback.  Rebellion against the old mainstream is the new mainstream.

Now, there are rationalizations for hating the band besides the reasons I just provided, mainly centering on their formulaic music and misogynistic, hedonistic lyrics.  Yet such traits are acceptable in other genres of music.  For every anti-glitz, pro-equality “Royals” or “Thrift Shop” or “Same Love,” there is Robin Thicke’s “Blurred Lines” or Miley’s “We Can’t Stop.”  Interestingly, it is becoming cool to hate on Miley now.  But take a look at her record sales and how much publicity she gets and ask her if she cares.  Ask the same question to Justin Bieber.  The public eye may view him as a Class A a-hole, but if all he wants is money, fame, and a few friends who don’t care that he and his music both suck as long as they can party with him, he is a happy man-child.

And when it comes to formulaic music, remember that Nickelback’s formula was once very popular.  It may be that in five years, when the popular music landscape has changed, we all look down our noses at the once-trendy Mumford and Sons for daring to use the same damn strum pattern and banjo picking in every song.  I still don’t understand why more people don’t publicly denounce AC/DC for similar-sounding songs. 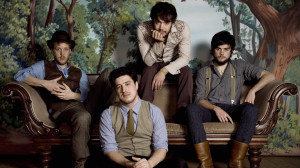 So before you automatically hate on Nickelback next time they are brought up in conversation or played as a card in Cards Against Humanity, think about why you hold your opinion of them.  Most likely, you have no clue why; you just hate them because you hate them, and because it’s cool to hate them.  And that’s fine, I guess.  Just have some sympathy for a band that likely defined your middle school years and has a lead singer unfortunate enough to look like Nicolas Cage. 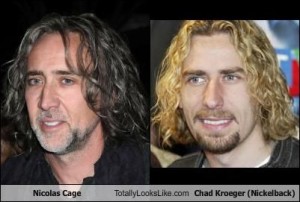 * Remember to tune in for The VU Backstage every Sunday at 9pm central!