The great metal band Mastodon finally return to Nashville after recording and releasing their sixth studio album, Once More ‘Round the Sun, in nearby Franklin, Tennessee, and this time around they’ve brought some friends, Norwegian metal band Kvelertak and, a band that I’ve really been getting into in the past several months, the French band Gojira.  When I was looking at going to the concert, I actually hadn’t heard of Kvelertak, but a friend of mine described them to me as “blackened hard rock” before the show started.  However, I was excited just to see Mastodon and Gojira on the same bill, and I was not disappointed in the least. 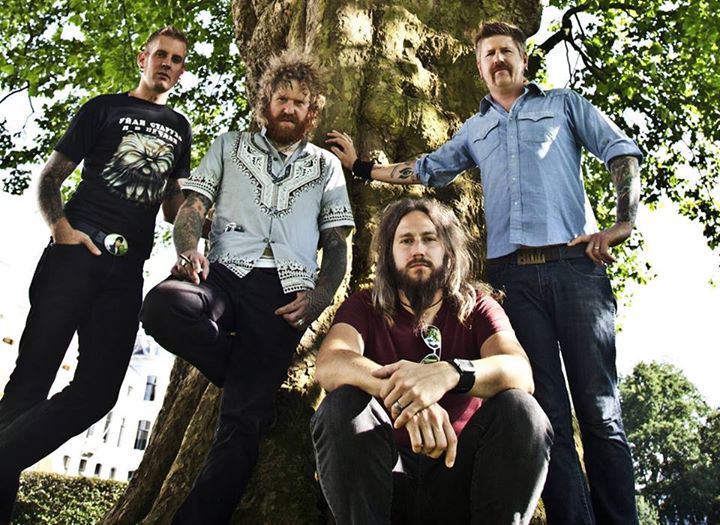 Mastodon/Gojira/Kvelertak marked my first journey to Marathon Music Works, and I thought the “industrial warehouse turned venue” look was really appealing.  It reminded me of a venue that I always used to go to in Chattanooga.  When Kvelertak came onstage, I didn’t really know exactly what to expect.  The frontman, Erlend Hjelvik, walked slowly to the microphone wearing an owl.  Yes, wearing an owl.  Soon enough, the band got to playing some, what I would definitely call, black metal.  I’m not a huge black metal fan (just a personal preference thing), but they managed to get the crowd into the perfect kind of mood for the rest of the show.  They only played for about 30 minutes or so, but from what I heard, I am definitely planning on checking out more of their music as it was complex and sounded like something I might really enjoy.

I have only been getting into Gojira for the past 5 months or so, but their music is incredibly unique in that they manipulate their guitars in a way that adds really interesting little touches to the songs.  When they first came onstage, the crowd was unbelievably excited, chanting their name.  They burst into a great rendition of “Ocean Planet”, the first song off of their brilliant album From Mars To Sirius.  They hit the guitar squeals with utter perfection, and Joe Duplantier’s guitar tone is just out of this planet.  Mario Duplantier’s drumming was on point the entire set, and double bass kicks were extremely well-timed.  The pick slides near the end of “Ocean Planet” were a highlight of the set.  They then segued into a song off of their latest album called “The Axe” followed by another crowd favorite off of From Mars To Sirius, “The Heaviest Matter in the Universe”. 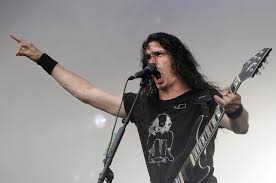 After a few more songs, they broke into a rendition of the title track from their latest album L’Enfant Sauvage.  That song was definitely a fan highlight of the show.  Ending the show was “Toxic Garbage Island” and “Vacuity”, the former being a personal highlight for me.  Overall, what else can be said about a band with so much instrumental and songwriting talent (as well as originality) except for “Wow, what a show”.  Mario Duplantier’s drumming stood out to me as being particularly great.  He simply locks down a groove and leads the rest of the band almost more than Joe Duplantier does with an incredibly solid and precise beat.  Now, that’s definitely not to discredit the rest of the band as they are phenomenal musicians and bring their own talents to the table

Finally, the moment that (most) everybody had been waiting for.  Mastodon.  Some of the royalty of the sludge metal scene.  Opening up with the first song off of their newest album (“Tread Lightly” off of Once More ‘Round the Sun), the crowd immediately reacts and a mosh pit forms.  I’m not really a mosh pit guy, so I stayed comfortably on the edge of it for the rest of the concert.  The majority of the beginning of the concert was made up of newer material, consisting of “Once More ‘Round the Sun”, “The Motherload”, “High Road”, and “Chimes at Midnight” from Once More ‘Round the Sun and “Blasteroid” from The Hunter. 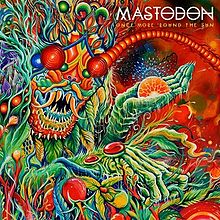 Cover of Mastodon’s latest full-length studio release, Once More ‘Round the Sun

Video for “The Motherload”, single off of Mastodon’s latest album

I’m not really a huge fan of The Hunter (it’s probably my least favorite album, including their new album), so “Blasteroid” was kind of a low point in the concert, but low point at this concert means high point during most concerts.  Mastodon also add in “Oblivion” during the first part of the set to give a little taste of what’s to come later.  The most amazing aspect of the concert at this point is the progression of Troy Sanders’ voice.  Watching videos from just a few years ago and then seeing them live now, it’s unbelievable that it’s the same vocalist.  After “Chimes at Midnight”, Brent Hinds take the spotlight with a little soloing in his typical fashion (excellent soloing, I should add) before bursting into one of my all-time favorite Mastodon tunes, “Aqua Dementia” off of their landmark album Leviathan.  The crowd went absolutely wild during this song.  The pure gritty tone of Brent Hinds’ and Bill Kelliher’s guitars really make the song for me.  A friend pointed out to me that sometimes it’s not the gain of Mastodon’s guitars that make their sound so good, but it might actually be that they use a low gain (and a lot of it).  That really comes out during “Aqua Dementia”, my single favorite highlight of the night. 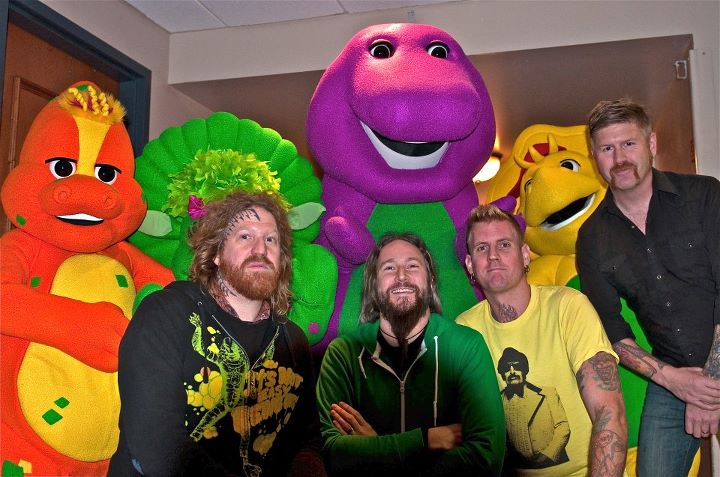 Mastodon pictured with Barney and friends

Mastodon also made sure to play something from every album as they played “Ole’ Nessie” from Remission, going back to their roots in straight sludge metal before adding a more progressive element to their sound.  Soon after was another one of my favorite song off of Crack the Skye, “Divinations”.  Even though it’s one of the shorter songs on the album, it is still my favorite.  Ending the show with a bang was the triad of “Megalodon”, “Crystal Skull”, and finally “Blood and Thunder”, everyone’s favorite metal song from Need For Speed: Most Wanted 2005.  “Megalodon” remains one of the great headbanging songs of the band’s entire career, in my opinion, and has some of Brann Dailor’s best drumming during the middle section.  “Crystal Skull” is definitely a fan favorite off of Blood Mountain, so it made sense to play that close to the end.  Finally, the entire room seemed to shake during a wonderful, upbeat performance of “Blood and Thunder”.  The mosh pit got even more excited (not that I’m really about that life).

In conclusion, wow, what a show.  Kvelertak opened up with such brilliance and raw energy to set the mood for the rest of the show, Gojira laid down some mind-boggling metal beats and guitar squeals, and Mastodon sealed the deal with a show that displayed confidence and growth in their work.  They’ve grown from a good sludge metal band with their first studio album Remission to a very good band that exemplifies willingness to improve on their songwriting and instrumental ability with their newest album Once More ‘Round the Sun (which all Mastodon fans should buy).  Even more than the improved instrumental ability is Troy Sander’s vocal ability, which has gotten infinitely better even in just a few years.  Mastodon, Gojira, and Kvelertak brought the metal to Nashville, something that a scene overrun with less-than-metal bands needs.