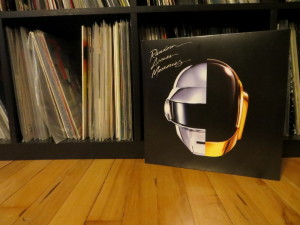 If you’ve been in Urban Outfitters recently, odds are you’ve seen some vinyl records. These dinosaurs of the music world have been making a comeback in slightly more hipster circles for a while, hence their appearance in one of the most hipster clothing stores of them all. These records aren’t just the oldies that your parents listened to either. In fact, new albums are still being released as vinyl records as well as in more contemporary formats. So in honor of this resurgence, I hereby present to you a history of music formats, from vinyl to MP3.

RCA Victor was the first company to introduce vinyl records as we know them. In 1930 they launched the first commercially available vinyl record with a 12″ diameter and 33 1/2 rpm. Unfortunately, their record didn’t really catch on due to a lack of reliability coupled with a hesitation towards luxury consumption as prompted by the Great Depression. In 1939, however, Columbia Records adapted RCA Victor’s design and came up with a less expensive, more reliable version. In 1948 they released the 12″, 33 1/2 rpm microgroove LP. RCA Victor then came out with a competing 7″, 45 rpm version that challenged Columbia’s LP. In the end, RCA Victor’s version became known for EPs while Columbia’s LP remained the more prevalent record type.

For those of you who may not be very familiar with the 8-track, it may be easiest to imagine it just as a really old cassette. 8-tracks were introduced in the mid-1960s and were popular through the 1970s. The 8-track was a loop of 1/4 inch magnetic tape housed in a plastic cartridge. There were eight parallel sound tracks on the tape, hence where it got its name. Although 8-tracks tend to be associated with automobiles, they were actually developed by the Learjet Corporation.

The compact disk was released in the early 1980s and was named as a conscious reference to the success of the compact cassette tape. It was developed by Philips, and used laser technology in order to read the disk without physically touching it. Originally designed with an 11.5 cm diameter, the CD was expanded to be 12 cm to accommodate Sony’s request that the disk be able to contain all of Beethoven’s 9th symphony. This inter-company cooperation was part of an effort to standardize the new format. Eventually Philips and Sony released their Red Book, which laid out the standards for the new compact disk. Then in 1982 the first CD player was released and the rest is history.

Of all of the formats discussed in this article, I am willing to bet that the MP3 is the most common musical format currently in existence. In 1987 this format began to be developed by the Fraunhofer Institut in Germany, and by 1989 they held the patent. They continued to refine the formatting until the mid 1990s and in 1996 they finally patented the format in the United States. MP3 stands for MPEG Audio Layer III and it is a standard for audio compression that decreases the size of music files while preserving quality. In 1999 the first MP3 player was introduced. Now MP3s are a staple of our everyday life.

Maybe you’re really into the vinyl trend. Or maybe your iPhone is your best friend with its small legion of MP3s. Ultimately though, it’s not about how you listen. It’s about what you listen to.