Canadian five-piece Alvvays finally released their second album, Antisocialites on September 8th, under Polyvinyl. Alvvays’ eponymous debut album explored a beautiful, but tumultuous relationship arc. It began with singer Molly Rankin urging a fictitious Archie to marry her in the album’s breakout track “Marry Me, Archie.” Later, in “Atop a Cake,” she seems to have changed her mind, singing:

“Why let the State in our sheets?
Can’t we do without it?”

Three years have passed, and Rankin is no longer shrouded in distortion and indecisiveness. She’s made her choice: life’s better without Archie, and Antisocialites is decidedly a break-up album. 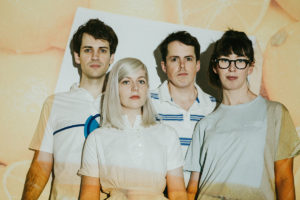 After hearing Alvvays’ two albums without truly digesting their lyrics, you might guess that Antisocialites examines the relationship and Alvvays its aftermath, rather than the opposite. Antisocialites disguises heartbreak behind catchy, utterly danceable melodies and colorful guitar riffs, while Alvvays has a more somber, reserved tone, and perhaps that’s why Archie has been left behind. Antisocialites retains Alvvays‘ dream-like quality, with a few distinct differences. After the supposed break-up Rankin and Alec O’Hanley, Alvvays’ other creative force, write about, Rankin no longer hides behind heavy vocal effects, declaring in “Not My Baby”:

This is indicative of the marked growth Alvvays has experienced, producing a far cleaner, shimmery sound as Molly Rankin has become more comfortable with the concept of being a singer, rather than just singing out of necessity, as she’s expressed in the past.

In its creation, Antisocialites saw Rankin retreat to Toronto Island in order to get the seclusion and isolation she needed for inspiration, which is particularly fitting with the album’s title, as well as its lyrical content. On “Hey,” the album’s grittiest song, Rankin sings:

“Should we pull the parachute?
(Don’t think so)
I will land on my feet but I probably won’t leave the house for awhile”

This vein continues on “Already Gone,” as the album reaches one of its most pessimistic moments. The song is laden with melancholic imagery that conjures feelings of hopelessness and anguish; drowning, a drained pool, the end of summer. Rankin convinces herself that she’ll never find love again:

However, Alvvays doesn’t leave us without hope entirely. Though Antisocialites focuses primarily on the consequences of leaving relationships behind, it remains upbeat, assuring us that, often, it’s for the best.