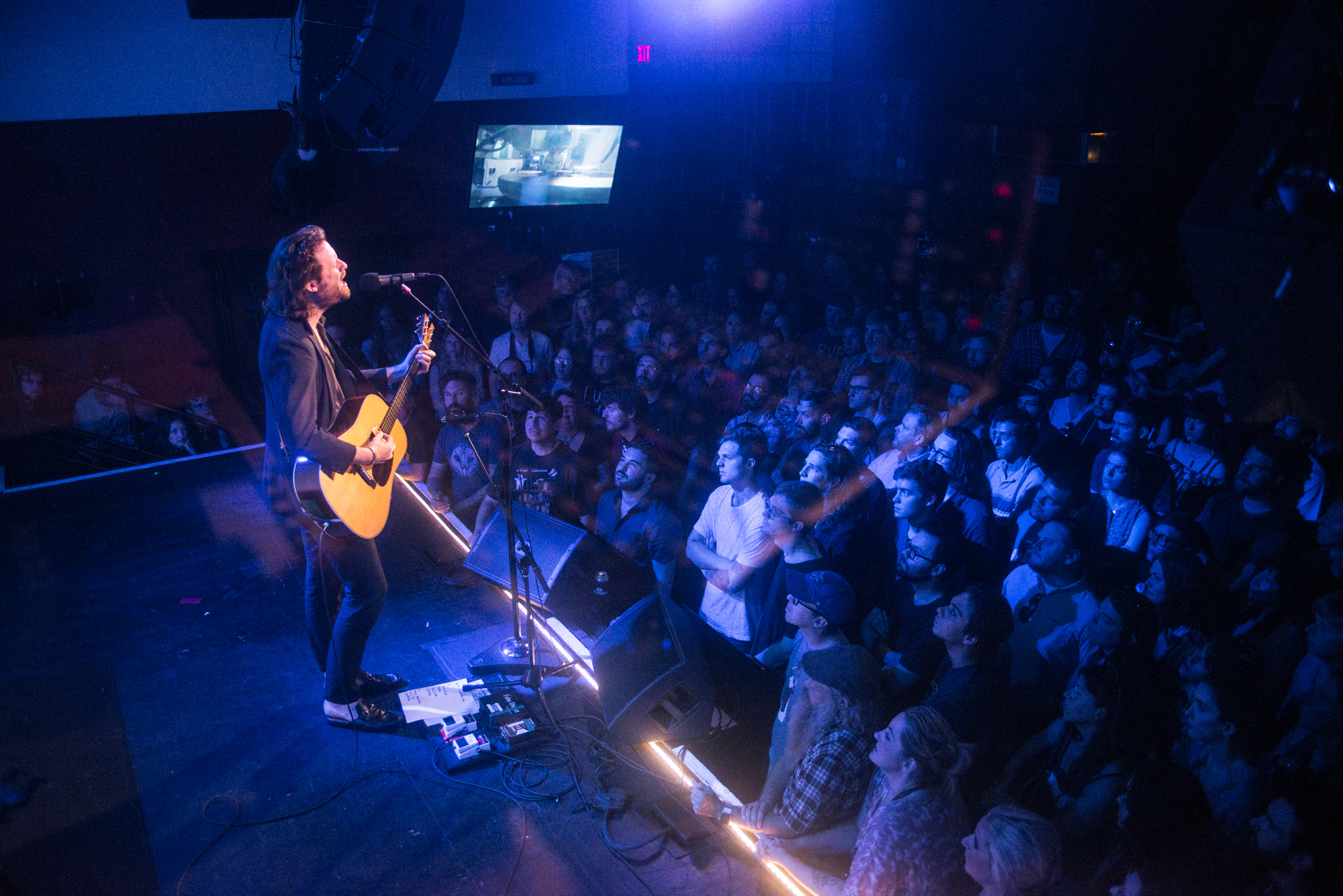 Photo: Third Man Records (spot me on the right!)

On Tuesday, September 25th, independent singer-songwriter and ironic demigod Joshua Tilman descended upon Nashville in the form of Father John Misty to give two amazing performances in one day: a solo acoustic show at Third Man Records and a full show at the Ryman.

Fans lined up bright and early (including yours truly) for a chance to gain admittance to Jack White’s wacky palace of vinyl and hear Papa John preach with just his Martin guitar. The performance was intimate yet hilarious; for a soundcheck, Tilman debuted a brand new song about his stay at a hotel told from the perspective of the manager, begging Tilman to stop with his shenanigans.

For the actual set, which was recorded “direct to acetate” and therefore capable of being easily mass produced on vinyl, Tilman played mostly older songs from Fear Fun and I Love You, Honeybear. Only one song from Pure Comedy, his latest record, made the cut: “So I’m Growing Old on Magic Mountain.”

The show was filled with magical little moments, like when Tilman replaced a line in “Bored in the U.S.A.” with a simple pause and a “…Fuck!” And during the closer “Every Man Needs a Companion” Tilman made up several lyrics, riffing about the bible and how God isn’t too fond of “funny business.”

Later that night, Father John Misty came to the hallowed halls of the Ryman auditorium, this time joined by his whole backing band of nine musicians. Imagery from Pure Comedy flashed on the screen as Tilman effortlessly worked the crowd, performing hits from all three of his acclaimed studio albums.

He kicked things off with “Pure Comedy,” which escalated into a blissful catharsis that led straight into “Total Entertainment Forever.” The line “bedding Taylor Swift / every night inside the Oculus Rift” sounds just as fantastic live as it does on wax.

After the horn-filled “Things It Would Have Been Helpful to Know Before the Revolution” and the melancholy Elton John-esque “Ballad of the Dying Man,” the purple lights gave way to brighter, pinker lights as Father John Misty dipped into some tracks from Fear Fun and Honeybear.

The highlight was unquestionably the philosophical yet whimsical ode, “Holy Shit,” which Tilman played as the last song of the encore. The dramatic, orchestral chaos of the original track translated surprisingly well on stage, complete with strobe lights and fog accompanying Tilman’s bellowing of the final chorus of his best song.

Everyone in attendance (including Patrick Carney of the Black Keys!) sat in their pews slack-jawed at the sheer performance skill they were witnessing. After all, Joshua Tilman wanted to to be a preacher at a young age just because of the showmanship!